UPDATE: Live photos of the 2020 Land Rover Defender from its debut at the 2019 Frankfurt Motor Show have been added to the photo gallery below.

For the first time in decades, there’s a fully redesigned Land Rover Defender coming to market. Also for the first time in decades, it’s officially coming to the North American market. If you’re tired of waiting for the Ford Bronco, find the Jeep Wrangler too uncivilized, and think the Mercedes-Benz G-Class is too expensive, Land Rover just might have the utilitarian off-roader for you. 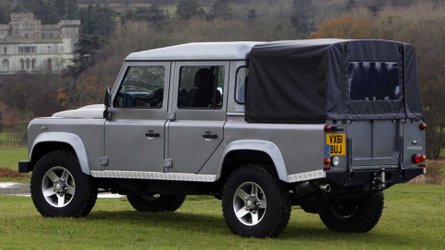 Land Rover Defender: See The Changes Side By Side
⠀

Of course, utilitarian is a relative term and one not mutually exclusive with the word “modern.” There’s a tremendous amount of new, smart technology on the Defender, and it starts under the hood. The Defender will arrive with a lineup of two diesel engines, a gas-powered, turbocharged four-cylinder, and a gas-powered straight-six with a mild-hybrid system. Land Rover expects a plug-in-hybrid Defender to be ready in 2020.

Best case scenario, we’ll get one of the two turbodiesel engines in the U.S. (the likely candidate is the 2.0-liter with 237 horsepower and 317 pound-feet of torque). On the gas side of the equation, the turbocharged 2.0-liter that will likely serve as the base in the North American market is a familiar Ingenium mill with 296 hp and 295 lb-ft – the Defender shares this engine with the Evoque, E-Pace, and even the plug-in-hybrid Range Rover. The most potent Defender will pack a 3.0-liter straight-six matched with a permanent-magnet electric motor and a lithium-ion battery pack. Combined, expect 394 hp, 406 lb-ft of torque, and a zero-to-60 time of 5.7 seconds in the Defender 90 and 5.8 in the bigger Defender 110. An eight-speed automatic works alongside every engine.

And of course, that gearbox shuttles power to a permanent all-wheel-drive system. A standard two-speed transfer case amplifies the all-wheel drive, while the Defender gets Land Rover’s familiar (and excellent) Terrain Response 2 system as well as a manually-locking center differential and an auto-locking rear diff. An optional air suspension system makes this impressive package even more capable.

A Weird Off-Roader To Come: 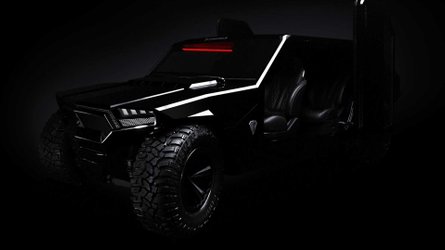 Ramsmobile RM-X2 Arrives Claiming To Be The Hypercar of SUVs

The height-adjustable setup is old hat on the Range Rover and Discovery, but its presence on the Defender should provide a balance of off-road capability and on-road comfort the bruiser has never possessed before. The air suspension offers maximum ground clearance of 11.5 inches and what Land Rover calls “world-class off-road geometry” for the 110. The approach, breakover, and departure angles of 38 degrees, 28 degrees, and 40 degrees, with the latter two figures besting the Jeep Wrangler Rubicon Unlimited’s 22.6-degree breakover angle and 37-degree departure angle (the Jeep has a 5.9-degree advantage on approach). The Defender also enjoys an advantage in the water, with a max wading depth of 35.4 inches to the Wrangler’s 30. The party piece to all this off-road goodness is the new ClearSight Ground View system, which we experienced on the Evoque earlier this year.

The most potent Defender will pack a 3.0-liter straight-six matched with a permanent-magnet electric motor and a lithium-ion battery pack.

That’s but one piece of advanced tech in the new Defender. Standard over-the-air software updates and the arrival of the new Pivi Pro infotainment system make the Defender as modern as possible. Pivi Pro’s always-on nature means as soon as the engine fires up, the system is ready to go via the 10.0-inch touchscreen. The new infotainment should be faster and easier to use, too, with Land Rover claiming it cuts the number of steps a user has to take to do something by 50 percent on average. It feels a bit nerdy to focus on an infotainment system in a vehicle like Defender, but we’d be lying if we said we weren’t excited about the prospect of a new and improved operating system.

Of course, this is still a Defender, and none of this tech impacts its overall versatility. The Defender 110 – the first of the new models to hit the market – will be available in either five-seat or five-plus-two-seat configurations, while the Defender 90 can accommodate up to six people. Both cars are available with a front-row bench which is just the coolest. The middle jump seat’s backrest can fold forward to serve as a cupholder or flip up to accommodate another passenger. Don’t think that’s the Defender’s only party trick, though. Land Rover is offerings so many accessories here it’d make a Jeep fan blush. In fact, customizability seems to be central to the new Defender’s identity. There will be over 170 accessories available when the Defender launches (and that’s before the aftermarket gets involved), with four pre-set packs.

These aren’t decals and wheel caps, either. The Explorer Pack adds a raised air intake, a roof rack, and super-neat side gear carriers, which look like saddle bags that drape over the rear side windows. Customers that need a bit more capability can add roof ladder and additional body protection. The Adventure Pack features a 6.5-liter water reservoir with a hose and shower attachment, an air compressor, and side-mounted carriers. The Country Pack adds interior storage partitions and a rinse system, while the Urban Pack focuses mainly on aesthetics and includes a cover for the spare wheel. This stuff is available independently and in addition to an available roof-top tent and front winch. As a blank canvas for overlanders, the Defender is something to be excited about.

The five-door Defender 110 will hit the U.S. market in Spring 2020 with a starting price of $49,900. Land Rover hasn't announced pricing for the three-door Defender 90 yet, but has said it will follow its larger sibling into dealers later next year.