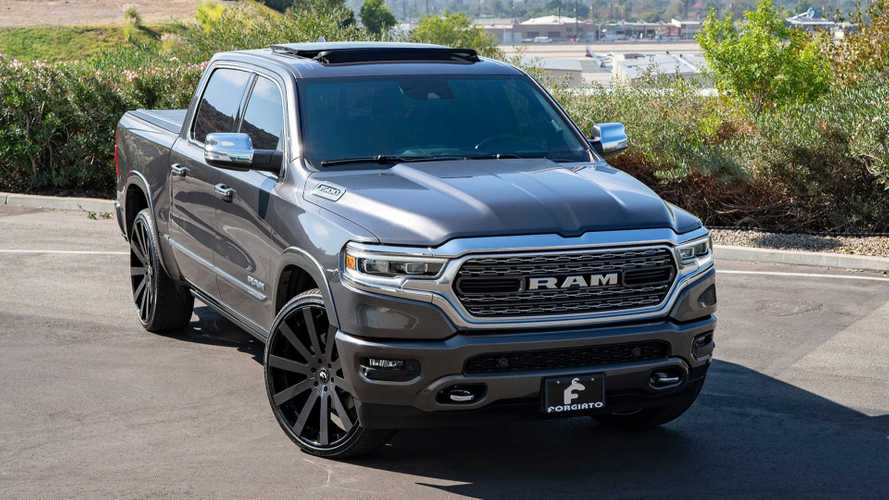 It's actually pretty low-key for the NBA Hall-Of-Famer.

Shaquille O’Neal is a big dude. He’s also somewhat known for his collection of cars, which brings us to this latest addition in the O’Neal garage. If we’re honest, a gray 2019 Ram 1500 seems rather mild compared to some of the other rides we’ve seen the former NBA star tooling around in. Even the big 26-inch custom wheels aren’t especially eye-catching. Perhaps Shaq is seeking a quieter existence these days?

Actually, there’s more here than meets the eye. The new Ram 1500 is arguably the best-looking pickup truck available today, which isn't a bad place to start. Shaq’s new ride doesn’t skimp on the details either, as it’s a Limited model with a starting price of around $57,000. We don’t know exactly how the truck is optioned out but we can easily see the Hemi badge and the big panoramic sunroof – options which would bump the price to $60,000 without much trouble.

As for those wheels, they are Forgiato Concavos that have been painted to match the truck’s exterior. They indeed measure 26-inches in diameter both front and rear so they aren't small by any means, but interestingly enough, they don’t look insanely large mounted on the Ram. Hopefully Shaq is able to avoid potholes, however, because we suspect the rubber-band tires mounted to them won’t provide much protection on cratered ground. With Autoevolution reporting the wheels costing at least $10,000, we’d certainly want a bit more rubber on there for protection.

The Ram is ready:

Ram 1500 North Edition Is Ready For When Winter Is Coming
⠀

The new whip is in sharp contrast to his other truck. Last year we talked about his massive Ford F-650 crew cab, custom-built for the big celeb with features that more resembled a semi as opposed to a pickup. Ironically, that truck actually had smaller wheels than the Forgiato Concavos on the new Ram, but the tires were far larger.

Then again, if this is what Shaq considers a daily driver, he can probably afford to replace a bent rim or two.