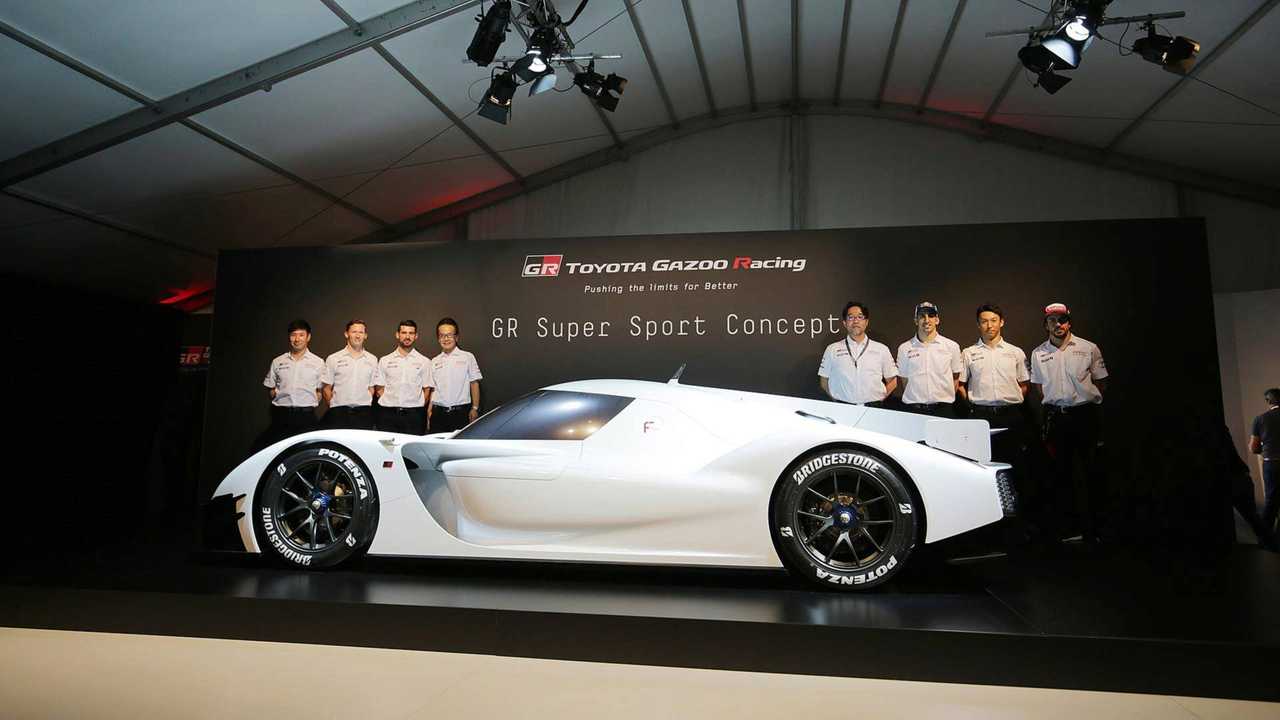 Toyota announced plans to put the GR Super Sport Concept into production at the 2018 24 Hours of Le Mans, and the company has now released some live photos from the big unveiling in France. The new machine appears to be part of the company's effort to get development underway for the next generation of race cars at Le Mans.

The GR Super Sport Concept uses a mid-mounted 2.4-liter biturbo V6 and the race-derived Toyota Hybrid System-Racing to produce a total of 986 horsepower (735 kilowatts). Thirteen-inch-wide wheels at the front and rear means there's plenty of tire contact patch for putting the power down. Underneath the svelte shape, there's a whole lot of carbon fiber for keeping weight as low as possible.

The timing of the GR Super Sport Concept's unveiling and the announcement of new hypercar-spec regulations for the top class of the FIA World Endurance Championship suggest that this is Toyota's competition machine under the new rules. For the 2020 season, the fastest endurance racing machines will be more production-based vehicles. According to the provisional rules, exterior design will take precedence over aerodynamics, and there will new homologation procedures. The vehicles will be allowed a single KERS hybrid unit at the front axle and a combustion engine driving the rear wheels. The regulations will also require for the KERS system to be available on production cars.

According to reporting from Motor1.com's partners at Motorsport.com, Toyota, McLaren, Aston Martin, Ferrari and Ford have been present during the discussions of the new rules package. This participation suggests these brands have at least a passing interest in possibly competing in the class.

Toyota isn't yet saying when the GR Super Sport might debut, but the company confirms that development is underway.

Meanwhile, the development of Toyota's next generation of super sports car has started. It takes the cutting-edge hybrid electric systems and fuel economy technology that the TGR WEC team has tested and refined during the past six years in WEC, and showcases them in one superb package.

The GR Super Sport Concept is powered by a V6 twin turbocharger and the Toyota Hybrid System-Racing (THS-R), delivering a combined output of 1,000 DIN hp, which it shares with the TS050 Hybrid LMP1 race car.

Shigeki Tomoyama, President of GAZOO Racing Company, said: "Competing in the World Endurance Championship -one of the most demanding motorsports series- and racing at Le Mans -one of the most iconic races- helps us to advance the development of our world-leading hybrid electric technology and enables us to transfer the knowledge we gain into our production cars.

As the automotive industry is approaching an era of big changes, we will continue our passion for making cars that are truly exciting. No matter how electronics and digital technology will continue to transform vehicles, we will make sure that our cars will not become just another commodity.

We started this project because we believe that creating a super sports car that delivers the same appeal as the TS050 Hybrid greatly adds to Toyota's involvement in WEC. And at some point in the near future, customers will have a chance to get behind the wheel of this incredible machine and experience its astonishing power and driving performance", concludes Tomoyama.