Audi Teases Q8 With Sketching Of Its Angular Rear End 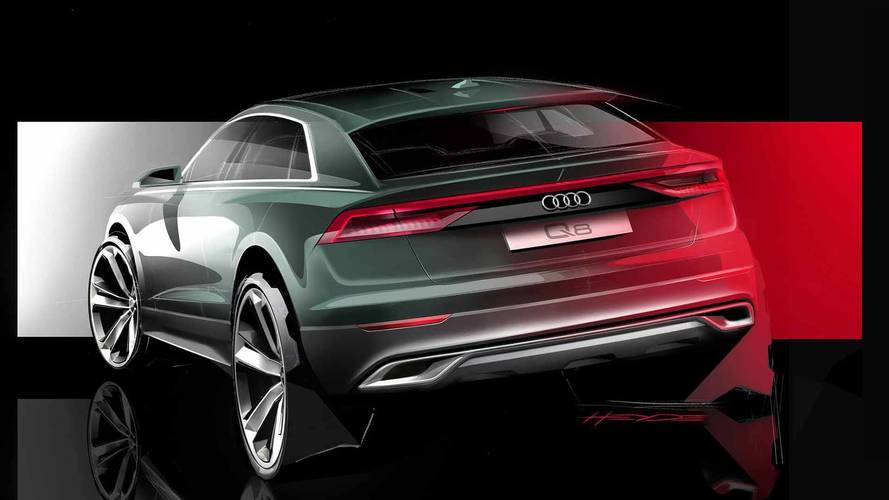 The company is also launching a five-episode video series that showcases the upcoming SUV.

Audi is teasing the impending reveal of the new Q8 once again, but this time the image actually provides a decent look at the stylish SUV rather than just a simple line drawing. It looks like a sleek entry into the premium SUV segment.

The Four Rings' single sketch only shows the Q8 from the rear three-quarters perspective, but it provides a good view of how the model's lines come together at the back. The roof and a crease along the shoulders converge to lead the eye to the full-length taillight that spans the hatchback. Muscular fenders lend a rugged look, and trapezoidal exhaust outlets integrate into the bumper.

Spy shots (see gallery above) have provided a fairly complete view at the rest of the Q8. The SUV features a big grille with narrow headlights flanking it. A long hood leads to a flowing roof that gives the new model a sleeker look than the existing Q7. Inside, expect Audi's flagship crossover likely offers cutting-edge tech, including features like the 12.3-inch Virtual Cockpit digital instrument display and replacing many traditional buttons with touchscreens.

Under it's shapely exterior, the Q8 shares a platform with models like the Lamborghini Urus, Bentley Bentayga, and Audi Q7. We don't yet know the full powertrain range, but the Q8 should eventually be available with an E-Tron plug-in hybrid option that would combine a 3.0-liter turbocharged V6 and electric motor to produce a total of 438 horsepower (330 kilowatts) and 516 pound-feet (700 Newton-meters) of torque. A 17.9 kilowatt-hour lithium-ion battery would allow for an estimated 37 miles (60 kilometers) of fully electric motoring. Later, a range-topping RS variant might take the Urus' biturbo 4.0-liter V8 for an output boost to around 650 hp (484 kW).

Audi is also teasing a five-part video series about a couple on an adventure in a Q8 that provides an even better look at the SUV. The first episode premieres May 21. It ends June 5, which is just before the the model's official debut.