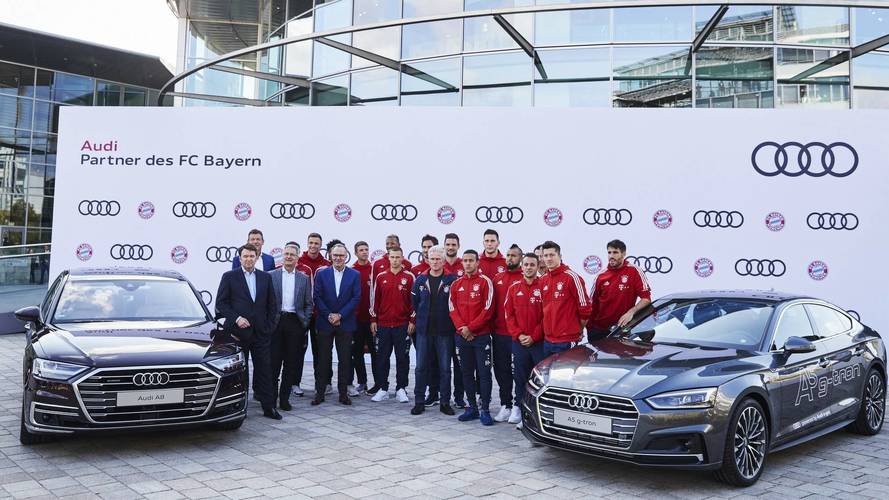 Being able to play for a top team like FC Bayern München certainly has its perks considering that every year, players are kindly asked to pick a car from sponsor Audi to drive for the following 12 months. It’s a tradition that has been going on since way back in 2002 and now for the 15th season, the players were once again “tasked” to select a model from the four-ring company.

Much like last year, the RS6 Avant was the most popular car as no less than five soccer players decided to go with the insanely powerful wagon, including here Hummels, Jérôme Boateng and Thiago Alcántara. In second place came the Q7 together with its SQ7 TDI diesel monster chosen by Müller and Franck Ribéry. Another fast SUV was the SQ5 now in the hands of coach Jupp Heynckes, while Felix Götze is driving the most humble car of them all – an A3 Sportback.

The players at Bundesliga reigning champion FC Bayern München traveled to Ingolstadt to take delivery of the shiny new Audis and also had the opportunity to visit the factory, which is actually the company’s biggest plant and also the second-largest car factory in Europe. The skilled players got to see how the A3, A4, A5, and Q2 model lines are being put together at the facility where exactly 592,337 cars rolled off the assembly line in 2016.

The event organized in the heart of Audi was a perfect opportunity to showcase the company’s brand new A8 flagship already available in Europe exclusively with V6 engines for the time being. Also on display was the thrifty A5 Sportback G-tron, which is safe to say is kind of a rare breed considering it’s a premium car that can run on compressed natural gas.

FC Bayern München continues to drive cars from Audi. Players and coaches of the international top-flight club used the international cap break for a visit to Ingolstadt this Wednesday to pick up their new “company cars” at the Audi Piazza.

For the squad around Thomas Müller, Mats Hummels and Robert Lewandowski, the visit to their long-standing vehicle partner Audi was an event on home soil. The soccer players from Munich are now in their 15th season of driving cars of the premium brand. Hundreds of fans from the region and numerous Audi employees gave the players an enthusiastic welcome. Group photos, selfies and autographs were followed by a plant tour for the team.

FC Bayern München and Audi have been forming a team since 2002. Highlights of the partnership include the Audi Cup, which has been held every two years since 2009 as a preparation tournament at Allianz Arena, or the Audi Summer Tour. This summer, the brand accompanied Bayern’s training camp in China and Singapore. There the squad played against AC Milan, Inter Milan, FC Chelsea and Arsenal London.