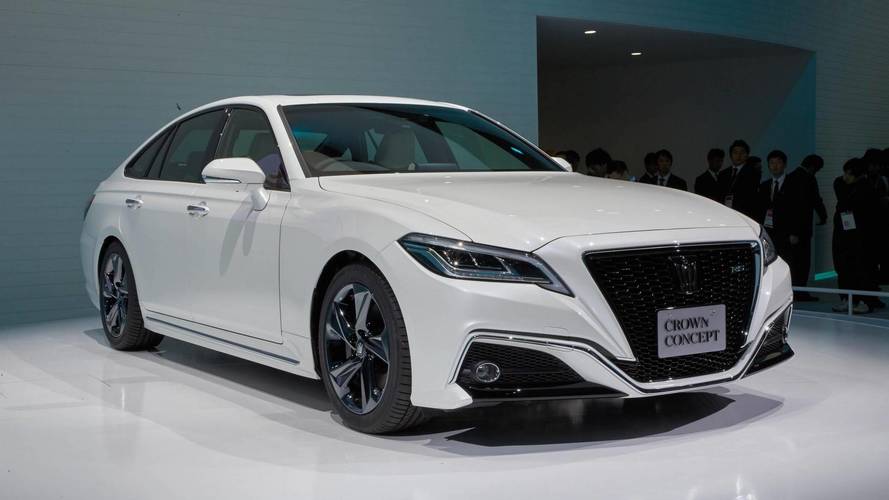 The current, 14th (!) generation Toyota Crown was launched back in December 2012 and was slightly refreshed in 2015. The model is now almost five years old and is in a desperate need of a successor. During the 2017 Tokyo Motor Show, the Japanese manufacturer will present a near production prototype of the new Crown, which could be revealed sometime next year.

Definitely the most important thing about the new Crown is the switch to Toyota’s new TNGA platform, which should “offer customers the enjoyment of driving cars while pursuing a future mobility society.” That’s a pretty vague statement, but we expect the re-engineered model to be lighter, featuring better handling and improved driving stability, all tested at the German Nurburgring track. The automaker promises the driver will only have to “enjoy the driving experience.”

Preliminary details suggest the new Crown will be slightly longer than the model that’s still on sale - 193 inches (4,190 millimeters) versus 192 in (4,885 mm), with a bit longer wheelbase. This should result in more space for the passengers, as well as additional boot volume.

As far as the design is concerned, the Crown study, previewing the 15th generation of the sedan, comes with sharp styling, dominated by massive radiator grille at the front, flanked by sweptback headlights. The side profile is muscular with wide wheel arches and long rear overhang.

The production version of the concept seen here will be equipped with Data Communication Modules (DCM) as standard. The system will be gathering data for vehicles and traffic, and will process the information to solve “societal problems” by “reducing traffic jams in cities.”

More information about the study and, hopefully, about the production model will be released during the Tokyo Motor Show later this month, so stay tuned.

The Crown Concept is a concept vehicle developed in pursuit of driving performance and connected technology. It features the blend of the storied Crown tradition with its birth in 1955 and the innovation to be expected in the Crown in a next generation mobility society.

The features of the Crown Concept are as follows:

To offer customers the enjoyment of driving cars while pursuing a future mobility society, TMC has re-designed cars from scratch, including building the new Crown Concept on a platform based on Toyota New Global Architecture (TNGA), and has conducted testing in Nürburgring, Germany. In addition to responsive handling performance, driving stability is realized whether driving in low-speed areas or high-speed areas and whether on smooth surfaces or rough surfaces. The driver is in control, put at ease, and can enjoy the driving experience.

Toyota hopes to provide new value to customers by utilizing big data that is acquired from DCMs installed in Toyota vehicles. The DCM will come standard in the commercial model of the Crown Concept.

Toyota's advanced technologies not only include automatic braking, but also ITS Connect, a connected technology service that keeps society safe as a whole through the sharing of information on things like traffic signals and other vehicles. Toyota has contributed to the early development of connected technology by participating in public and private demonstration experiments.

Enhancement of your driving lifestyle with big data

By utilizing the mobility service platform, Toyota aims to contribute to solving societal problems, for example, by reducing traffic jams in cities through the utilization of data on traffic congestion. Additionally, Toyota aims to diagnose vehicles remotely using vehicle data collected from DCMs to predict potential vehicular issues and the necessity for vehicular maintenance. Call centers provide quick and appropriate support and provide customers a sense of safety and security.

Toyota aims to offer a car that can continue to excite drivers, well into ownership, and believes that the remote technology unique to this connected car, as well as the utilization of a new mobility service, can provide an exciting evolution to the driving lifestyles of its customers. The commercial model of the Crown Concept is scheduled to be released around the summer of 2018.