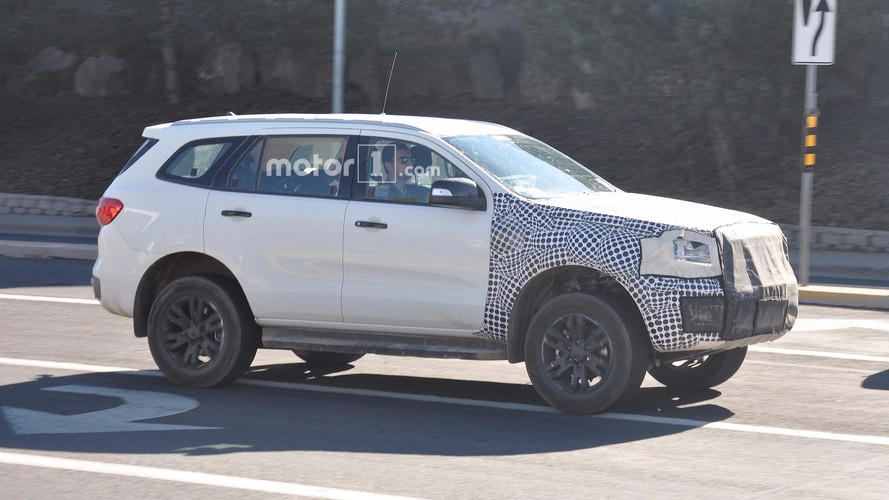 It may look like an Everest, but it's definitely a Bronco.

The eventual arrival of the new Ford Bronco should have fans of the Blue Oval, and off-road enthusiast in general, pretty excited. Already we know that the Bronco will get a rugged design, an equally rugged body-on-frame setup (in contrast to other forthcoming off-roaders), and four doors. Now, new images show what looks to be a prototype testing for the first time on public roads.

Though it may look like a Ford Everest at first glance, the Euro SUV rumored to be the inspiration for the upcoming Bronco, the underbody is all Bronco. Only the front fascia is camouflaged, likely hiding a near-production grille, headlights, and hood plastered on top of the Everest body. It’s obvious by the ride height of the prototype that Ford will be taking the Bronco’s infamous off-road characteristics seriously.

Rumors suggest that the new Bronco will come equipped with an EcoBoost engine and somewhere in neighborhood of 325 horsepower (242 kilowatts), as well as a healthy amount of torque. A new diesel engine will make its way to the F-150 and is rumored to be present on the upcoming Ranger, but its remains to be seen whether the Bronco will get the same treatment.

The new Bronco will be built at Ford’s Wayne, Michigan production facility, but most of the engineering and development will reportedly take place in Australia, specifically Ford’s Asia-Pacific Engineering Center in Victoria. Together with the Ranger, the Bronco will ride on a shortened version of Ford’s T6 platform. The new Bronco will make its debut in 2019, likely at the Detroit Auto Show, before going on sale later in the year for the 2020 model year.