Jeep is growing in the right direction.

It's not an overstatement to say that the only things of value in the American part of Stellantis are Ram trucks and the Jeep family. Hell, it wouldn't have been out of line to say that about FCA. Or Chrysler Corporation. Or DaimlerChrysler. And if you go back far enough, Jeep was the only thing of value in American Motors.

Jeep's importance isn't so shocking, but that it arrived in such a position selling only two-row SUVs is. For 2021, Jeep is finally addressing two of the most glaring gaps in its lineup with the Grand Cherokee L and Wagoneer/Grand Wagoneer. While we're more excited about the latter products, it's fair to say the Grand Cherokee L is the most important, introducing the bones of the next-gen Grand Cherokee and giving Jeep an entry in a segment where three-rowers account for 75 percent of sales.

And you know what? This is a three-row Grand Cherokee. Jeep has improved on the last-generation's driving experience, made some thoughtful tech and design updates, and yes, created a more versatile crossover. But for better or worse, it hasn't fundamentally changed the Grand Cherokee experience.

Despite the incredible popularity of three-row crossovers and the number of brands under its newly embiggened umbrella, Stellantis has gotten by in North America with just two products: the rapidly aging Dodge Durango and the awful Dodge Journey. The Grand Cherokee L improves significantly on those two.

The results in the cabin speak for themselves – this is a big-ass box.

To prove just how usable the cabin, and in particular the third row is, Jeep asked one of its 6-foot-4 engineers to clamber into the L's way back, where he was able to take advantage of best-in-class third-row headroom. And despite Jeep listing only 30.3 inches of leg space in its rear-most seats (2.2 inches less than the Durango and down on much of the competition), his knees weren't too close to the second row, nor too high up in his chest, and the footwell was adequate.

Getting in back was easy, too, thanks to a middle row that comes standard with “tip-and-slide” seats – automakers don't list the aperture size for getting into the third row, but if they did, the Grand Cherokee would probably be the best in class.

There are also suitable creature comforts for the rear-most chairs, too. It might sound like a ridiculous thing to highlight, but padded arm rests with dedicated cupholders are standard in the third row along with 12 total USB ports (both the common A and the next-gen C variety) spread between the three sections. And while it won't directly benefit those in back, Jeep pilfered the Chrysler Pacifica's parts bin and snagged its neat rear-seat monitoring camera. And of course, power-stowing seats are available on high-end trims.

Jeep paired us with a Grand Cherokee L Overland – the third of four trims and one step from the top-rung Summit – complete with four-wheel drive and the base 3.6-liter V6 engine. The upper half of the dash is probably the best in the segment. A leather dash topper, complete with contrast stitching, matches with matte wood and aluminum accents (both are the real deal).

But while bits and pieces of these premium finishes appear on the door panels, the predominant material there and on the lower sections of the dash and center console are egregiously hard and cheap plastic. The panels noticeably flexed when we pushed on them. That was far from the case in the Summit we poked around in later in the day.

Now, it's not unusual for an automaker to apply more or more premium materials to higher-end trims, but the distance between the top-end trim and the next closest is too big. The door panels are substantially sturdier in the Summit, and the center console's outer portions wear a padded finish (we aren't sure it's real leather, but the finish was far better than hard plastic). Check out the differences – the Summit is above and the Overland is below.

Overall, the pricier car's cabin felt better screwed together. This kind of thing would be acceptable if we're comparing the base Laredo with the Summit, but our tester started at $53,000, or a modest $4,000 less than the top-end trim. There's little excuse for such a stark difference in material quality.

We’re broadly familiar with most of the Grand Cherokee L’s tech suite – UConnect 5 and a new version of the current instrument-cluster display, which now lives in a 10.3-inch screen – but one of the big additions and perhaps the interior highlight is the available McIntosh Laboratory audio system.

This is the first time the famed American hi-fi producer has badged an in-vehicle sound system with its distinctive logo, and we wish it'd have happened sooner. This is a fantastic setup, with 19 speakers, a 10-inch subwoofer, and 950 watts of power. The quality of low, mid, and high-range notes is at least as good as what you'll find from Acura's ELS 3D Studio system or the Genesis GV80's available Lexicon setup.

Athleticism isn't high on the list of requirements for three-row crossovers, and while we'd expect a Jeep-badged model to do its thing off-road, we didn't expect such composure on paved surfaces. The Grand Cherokee L is a hoot to drive (mostly).

We say “mostly” because time has not been kind to its base 3.6-liter V6. The Pentastar engine was a highlight when it hit the market in 2011, but today's world is lighter and turbocharged, making this engine's modest 293 horsepower and slow-to-arrive 260 pound-feet of torque too little for a hefty three-rower. For comparison, the four-cylinder Ford Explorer's turbocharged 2.3-liter has 300 lb-ft of torque that arrives 500 rpm earlier than the Pentastar. At the same time, our 5,000-pound four-wheel-drive Overland is about 500 pounds heavier than similarly endowed competitors, like the Kia Telluride and Nissan Pathfinder.

The Grand Cherokee L is a hoot to drive (mostly).

Tasked with so much weight, the 3.6-liter wheezed its way up to speed. We didn't have a stopwatch, but it feels like 60 miles per hour arrived in about eight seconds. Jeep quotes this V6's tow rating at 6,200 pounds, but we can't imagine regularly towing that much with this engine. There's not enough low-end torque, and while the Pentastar remains potent with its mid-range punch, getting out of the meaty part of the torque curve hurt our ears. This engine is good in a narrow set of circumstances but outclassed in others.

Frankly, we wouldn't buy a Grand Cherokee L unless we could have the optional 5.7-liter V8, which Jeep only offers on the top half of its trims, the Overland and Summit. Its 357 hp and 390 lb-ft of torque bests every V6-powered rival except for the twin-turbocharged 3.0-liter in the top-spec Ford Explorer and feels far better able to manage the GCL's weight. It still doesn't sound too nice, but the results are plain to see on the speedometer, with substantially more low-end shove and an eagerness that doesn't exist in the Pentastar while at higher rpm.

Both engines match up with an eight-speed, ZF-sourced automatic transmission. Even though this gearbox proved less than eager to play when we selected manual mode, it's an able companion on highways and around town, delivering the kind of invisible performance the 8HP transmission has become known for.

Perhaps most impressive, considering its weight, is how well the Grand Cherokee handles. The suspension is a multi-link layout at all four corners, while the Overland and Summit come standard with a QuadraLift air suspension that can change the ride height by as much as 4.2 inches and can swing 1.8 inches up or down in just seven seconds. Engineers retuned the power steering system and fitted the air springs with adaptive dampers, while the engine sits 1.6 inches lower in the bay, for an improved center of gravity. Lastly, an electronic limited-slip differential is available on Hemi-powered models.

Perhaps most impressive, considering its weight, is how well the Grand Cherokee handles.

All this work means that the Grand Cherokee is a darn bit of fun in the bends. It's as light on feedback as you'd expect of a three-row crossover, but the ultimate cornering ability and its willingness to carry speed into corners is surprising. The steering is tight and direct, with a well-sized deadzone that makes highway driving easy and corner carving predictable. The GCL keeps control of lateral body motions, although there's more dive under hard braking than we'd like. Still, for a vehicle from an off-road-focused brand, Jeep's newest is something of an on-road revelation.

Of course, the Jeep is better at the highway slog, where it proved quiet and composed at higher speeds. Riding atop a new architecture, featuring an aerodynamic design, and packing active assists like grille shutters and a speed-dependent ride height, the Grand Cherokee L has an excellent grasp of noise, vibration, and harshness while cruising at interstate speeds. 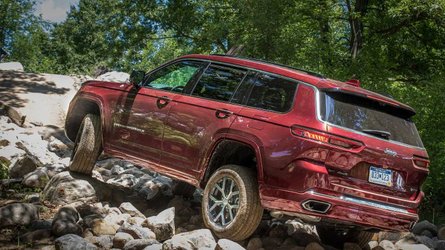 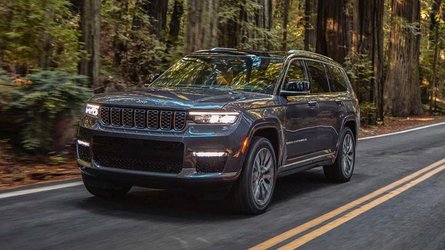 There's little wind whistling and virtually no tire roar, while the ride handles everything from glancing blows to big pothole impacts with poise – this is an exceptionally stable vehicle that excels at isolating the cabin from the outside world. We wouldn't hesitate to drive it across multiple states in a single sitting.

A big part of that is down to our Overland's active safety suite, which will eventually offer Level II hands-free driver assistance. For now, the current setup is as good as anything you'll find from Mercedes-Benz, Volvo, or BMW, dramatically reducing the driver's workload. Activation is as simple as setting the cruise control speed and pressing an additional button to turn on Active Driving Assist, and once running, the integration is class leading. The GCL responds well to sudden lane intrusions, while cruising is a drama-free affair – you won't find any ping-ponging between lanes or skittishness in corners from this suite.

Everything Has Its Price

With such dramatic swings in terms of equipment and material quality between trims, how much you're willing to pay for a Grand Cherokee will ultimately determine your satisfaction. Prices start at $38,690 (including a $1,695 destination charge), but that's for a two-wheel-drive Laredo. Four-wheel drive adds $2,000 across the board, and while we could settle for the $45,690 Limited, it means giving up the available V8, available Active Driving Assist, air suspension and adaptive dampers, and the McIntosh audio system.

Despite some real issues, the 2021 Grand Cherokee L is the three-row crossover Jeep has needed for years.

Put simply, there are better values than a $46,000 Grand Cherokee Limited – we'd take a fully loaded Kia Telluride all day. But where the Grand Cherokee L is a poor value relative to mainstream three-rowers, its Overland and Summit trims are good options compared to premium nameplates.

The Overland starts at $54,690 but going up to the Hemi and its mandatory four-wheel-drive system makes the effective starting price $59,985, or $4,000 less than a similarly powered Summit. While there are unquestionably drawbacks, we'd take them along with the money saved and pick the top-end GCL over a comparable Audi Q7 or Acura MDX, especially if the Jeep is packing the V8.

Despite some real issues – the gulf in material quality being the most substantial, although the base V6 is also a concern – the 2021 Grand Cherokee L is the three-row crossover Jeep has needed for years. It's not a perfect vehicle, but Jeep has successfully converted the Grand Cherokee formula to a more versatile form factor, pairing space with impressive technology and a pleasant on-road demeanor. Whether this three-rower will be able to crack into a segment dominated by established seven-seat nameplates is hard to say, but there's no question Jeep has brought a lot to the table with its newest entry.