The best compliment we can give the biggest VW is that there’s nothing glaringly wrong with it.

The 2021 Volkswagen Atlas is the largest vehicle the company has ever sold in the US, a curious offering from a company that once extolled the virtues of buying the compact Beetle over a comparatively huge Chevy Biscayne. A few styling and interior updates for 2021 bring the Atlas more in line with its funky, Teutonic forebears, but it’s still a distinctly American product, reflecting the changing values of VW and its buyers.

Unfortunately, it meets those consumer needs with none of the elan and poise that was once a hallmark of every Volkswagen product. Perfectly average styling and driving behavior draw no ire, and we applaud the Atlas’ available advanced technology features and spacious interior. But former Volkswagen owners will find themselves let down by the SUV’s disappointingly plasticky interior and forgettable (if inoffensive) styling. Nevertheless, the seven-seat Atlas is VW’s number-three vehicle in terms of sales, and we appreciated its overall competence during a test of an SEL V6 4Motion model with the Basecamp accessory kit.

The 2021 Volkswagen Atlas is an okay-looking machine, particularly since its facelift did away with the blocky front end that made it look heavy and ungainly. A more delicately styled grille, beveled headlights, and nearly horizontal hood help the Atlas look more German – to this author’s eyes, the front end somehow recalls the lauded Golf Mk4 sold in the early 2000s. The side profile and rear views are all but unchanged for 2021, with slightly redesigned taillights and not much else.

Things start to go wrong once you step inside. We’ve groused about the Atlas’ cabin since it debuted for 2018, and we really hoped to see some improvements when it came time to update the big SUV. That’s not the case. Hard plastics abound inside the Atlas – soft-touch appears only sparingly on the armrests, dash top, and upper door panels. Otherwise, everything below the vehicle’s beltline is done up in materials that look and feel decidedly low-rent, with sharp-edged plastic seams. Every other competitor, save perhaps the Ford Explorer, is better in this regard. 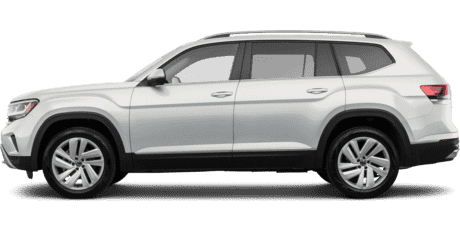 Somehow, the Atlas features large-crossover interior space in a midsize footprint. Front passengers have more than enough space to get comfortable on a long trip, though the cushy, heated seats might be a bit too shapeless for all-day support. The second-row seats slide fore and aft, and in their forward-most position, there’s enough space for kids and young teens – adults will want to kick them back a few notches. The bench is flat as a pancake, but tall folks will appreciate a seat bottom that’s long enough for some thigh support. The tilt-and-slide release affords third-row access even with a child seat installed.

Major kudos go to VW for raising the third-row bench up off the cargo floor, the higher hip point improving comfort even for adult passengers. Owing to its decently spacious third row and sliding second row, the Atlas would be a good option for a family of five or six, with class-competitive head and legroom in all three rows. Loading it down with seven passengers might be a bit tight owing to its slightly pinched shoulder room, but if you have to haul that many people, you’re probably shopping for a minivan anyway.

Thanks to an expansive 117.3-inch wheelbase, Volkswagen’s overall passenger volume of 154 cubic feet is up a single cube on the Ford Explorer, 2 on the Honda Pilot, 4 on the Subaru Ascent, and a staggering 15 on the smallish Toyota Highlander. The Chevrolet Traverse, Hyundai Palisade, and Kia Telluride are still the best in class, with 157 cubic feet of people space.

The Vee-dub also acquits itself well in seats-up cargo capacity, at 20.6 cubic feet – the Chevy does 23.0, the Kia/Hyundai twins 21.0, the Explorer 18.2, the Subaru 17.6, and the Honda and Toyota tied at 16.0 cubic feet. Behind the second row, the Atlas boasts 55.5 cubic feet, and dropping all rear seats opens up 96.8 cubes. Only the Traverse is larger in those metrics.

The Volkswagen Atlas SEL comes standard with the company’s Digital Cockpit gauge cluster, which is both attractive and easy to use. We appreciated the variety of information it offered, including altitude, navigation, audio, fuel economy, and driver-assist status, as well as the reconfigurable cluster that made use of either two analog-looking dials or a minimalist four-square layout. A wireless charger is a nice touch.

Confusingly, Volkswagen will offer both a 2021 and a 2021.5 Atlas; we tested the former, which does without the latter’s wireless Apple CarPlay and Android Auto integration. We prefer a wired connection anyway, but one mid-year update we’d have liked to try is a new MIB3 infotainment system. The outgoing MIB software works just fine, with quick responses and an attractive design, so we won’t complain too much and nor should potential owners. The 2021 Atlas still features a modern, if not totally cutting-edge, technology suite.

Volkswagen will happily fit the buyer’s choice of two powertrains in the 2021 Atlas. The base engine is a turbocharged 2.0-liter inline-four with 235 horsepower and 258 pound-feet, and it gets along just fine. However, ours rocked the company’s legendary VR6 engine displacing 3.6 liters and exhibiting the growl that’s synonymous with that narrow-angle layout. With 276 hp and 266 lb-ft on tap, the Atlas feels adequately muscular in most driving situations, but by and large, the engine’s character ends at its exhaust note. An eight-speed automatic transmission sends power to all four wheels.

Unlike Volkswagens of eras past, the Atlas isn’t terribly composed at higher speeds. The Kia Telluride and Hyundai Palisade, for example, feel much more planted when the speedometer needle sweeps past 70 miles per hour, and the Honda Pilot feels nimbler and more tossable on city streets or twisty roads. As in many other areas, there’s nothing terribly wrong with how the Atlas comports itself – it’ll get you and your family home in one piece – but it feels neither athletic nor luxurious. One bright spot is an excellent brake pedal, firm and easy to modulate when descending a freeway grade or slowing for heavy traffic.

Volkswagen Front Assist is standard on every Atlas, bringing forward collision warning, pedestrian detection, and automatic emergency braking with it. A technology package available on the mid-level SE gets adaptive cruise control, to which our SEL added lane centering and full-speed traffic jam assistance that can bring the Atlas to a complete stop. We observed some ping-ponging between lane lines, although a 2021.5 feature called Travel Assist should improve the driver-assist tech further – VW thinks it’ll be better about handling freeway curves.

Even our less advanced 2021 Atlas made good use of its active driver assistance technology to help us keep our attention on the road while reducing fatigue and providing a wider margin of error. Pressing two buttons is all it takes to bring adaptive cruise control and lane centering to full alertness (Front Assist is always on unless you manually switch it off), and it all worked together relatively seamlessly. Still, we’d have liked to try Travel Assist to see if it’s as good or better than the Palisade’s Highway Drive Assist, particularly since the new Volkswagen tech provides automated lane-change assistance.

That growly VR6 engine does its best to minimize fuel consumption with direct injection, lightweight aluminum-alloy construction, and variable valve timing, but it’s still pretty thirsty. At 16 miles per gallon city, 22 highway, and 18 combined, the Atlas is one of the least fuel-efficient vehicles in its class. The parsimonious Ford Explorer, Mazda CX-9, Subaru Ascent, and Toyota Highlander set the curve with 23 combined mpg, while the Honda Pilot isn’t far behind at 22 mpg. The Kia Telluride and Hyundai Palisade achieve 21 mpg, and the massive Chevy Traverse gets 20 mpg.

If you’re looking for fuel economy at the Volkswagen dealer, you’re better off settling for a front-drive Atlas with the turbocharged 2.0-liter engine. So equipped, you’ll achieve 21 mpg city, 24 highway, and 22 combined.

The Atlas lineup starts at $31,545 for the front-wheel-drive 2.0T in S trim, but a V6 SEL 4Motion like the example you see here demands $44,195. Thanks to a comprehensive set of standard equipment, the only options available on the trim are a $695 set of second-row captain’s chairs, features our Tourmaline Blue Metallic tester did without (buyers can also opt for a $395 shade of red if they’re hellbent on spending more money). That meant a sticker price of $45,215 with destination, though there’s one big caveat.

Since we don’t include dealer-installed accessories in our pricing scores (due to potential inconsistencies in installation and pricing from dealer to dealer), we decided to omit the $2,500 Basecamp accessory kit and its attendant $1,000 Fifteen52 wheels from our evaluation. For information’s sake, Volkswagen says the kit takes less than four hours to install, and the wheels don’t come with tires, so the owner will have to source those. All told, we estimate an Atlas configured exactly like the one we drove would cost about $49,000 with accessories, tires, and installation. That seems like a lot of coin for what you get, if we’re honest.

Though well-equipped, the mid-level Atlas SEL is priced like luxury trims of its competitors. We’d be tempted by a $44,390 Kia Telluride SX or $45,125 Hyundai Palisade Limited if we were spending most of our time on-road, while a $45,445 Subaru Ascent Touring would scratch that outdoorsy itch that the Basecamp tries to relieve. The bottom line here is that the 2021 Volkswagen Atlas is a safe, middle-of-the-road choice in the segment, but for many buyers, average just isn’t good enough.