Literally and figuratively, the new Mazda CX-9 is just a big Mazda3. No foolin’ – the seven-passenger crossover actually shares a platform with the smaller compact hatch (modular architecture for the win). In a more abstract sense, the CX-9 follows in the same philosophical footsteps as the 3. Mazda isn’t trying to outdo itself here; the company is following through on its reputation for making cars that look good and drive even better. If you like what Mazda’s up to these days, the CX-9 should certainly pique your interest.

It’ll at least catch your eye, anyway, with a strong styling statement that’s bolder and sharper than anything else in the three-row crossover class. With the rest of the segment, you see design elements of the usual subjects across a wide variety of offerings – Ford Explorer cues here, Honda Pilot attributes there. But comparing the CX-9 to other crossovers turns up names like Porsche Macan and Jaguar F-Pace. That alone is quite the compliment, but it makes a bigger splash when something this attractive shows up in a set of generic-ish two-box shapes. 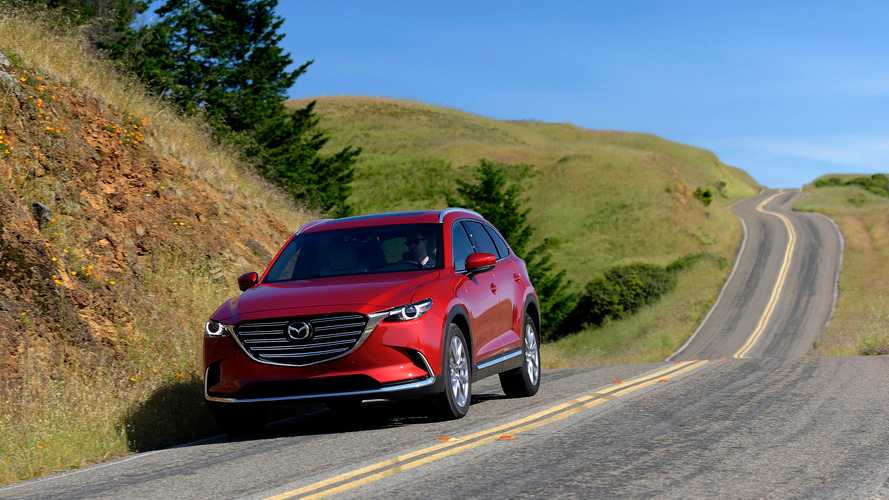 Comparing the CX-9’s styling to other crossovers turns up names like Porsche Macan and Jaguar F-Pace.

Across all segments, Mazda’s known for making the driver’s car of the bunch, and that same story stands true with the CX-9. Only one engine is available: a brand-new, turbocharged, 2.5-liter inline-four, good for 250 horsepower and 310 pound-feet of torque, mated to a six-speed automatic transmission. That's less horsepower than most of the other engines in the three-row V6 crossover set, but far more torque. Fuel economy is similar or better than everything else in the class, at 22 miles per gallon city and 28 mpg highway ratings (for the front-drive model – all-wheel drive knocks each number down by one). For comparison’s sake, the most efficient Honda Pilot tops out at 20/27 mpg city/highway (thanks to cylinder deactivation technology – something Mazda’s I4 doesn’t need), and a 2.3-liter turbo Ford Explorer nets 19/28.

Don’t let the figures fool you – there’s plenty of power on hand to move the 4,301-pound, AWD CX-9. Trim for trim, the CX-9 is anywhere from 258 to 269 pounds lighter than its predecessor, with 132 of those pounds taken right out of the nose (the 2.5T engine is a much more modern heart than the super-old 3.7-liter naturally aspirated V6). Running through the hills of downtown San Francisco, there’s enough grunt to move you up with a quickness, with only a touch of low-end turbo lag noticeable on these steep climbs. But out on the 101 freeway and iconic Pacific Coast Highway leading up toward Bodega Bay, the CX-9 is surefooted and powerful. The turbo engine never overwhelms you with its punch, and the transmission keeps the revs low, right around the 2,000-2,500 rpm sweet spot where peak torque is delivered. 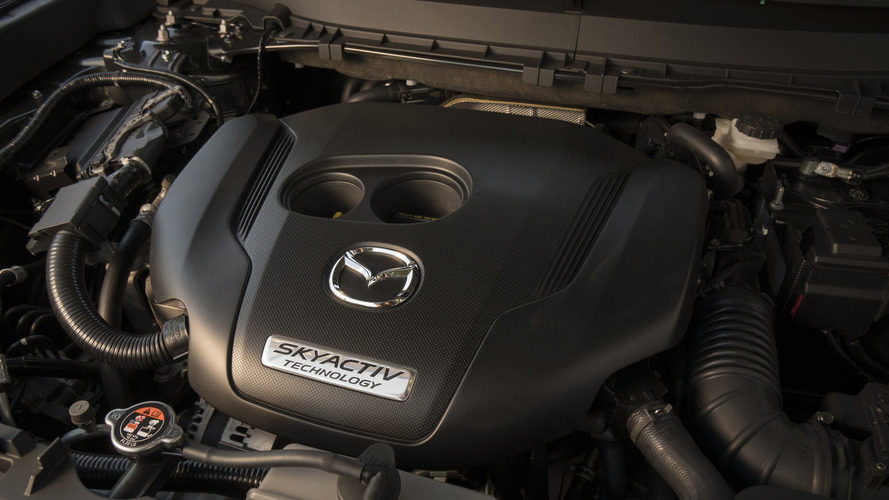 By the way, the ability to have the turbo motor hum along at the bottom of the rev range is why Mazda didn’t complicate the process by trying to develop or source a seven-, eight-, or even nine-speed transmission. The six-speed automatic shifts smoothly and quickly, keeps you in the power band, and still allows the CX-9 to return great fuel economy numbers.

Elsewhere in the driving department, the CX-9 impresses with a mix of crisp yet progressive steering, and a compliant yet taut chassis. Lessons learned from the rest of Mazda’s cars are present here in its largest offering, with a weighty steering feel that accurately communicates movements to the driver, and small amounts of roll baked into the experience that actually work with the way your eyes and head move while driving (yes, really). To say it’s the best-driving mainstream three-row crossover is certainly accurate.

I’ll argue that it’s one of the nicest to sit in, too. Granted, the top-level Grand Touring and Signature trims on hand at my San Francisco test represent the best of what Mazda has to offer, but I’ll say, the Japanese automaker really knows how to outfit a cabin these days. Premium Nappa leather and real rosewood trim are found on the Signature model, and the other soft-touch, plastic, and aluminum accents look and feel great. There’s nothing revolutionary about the gauge cluster, and the eight-inch touchscreen houses the same Mazda Connect interface that’s available in the rest of the company’s cars (which is really nice to use, by the way). But there’s something about the way the CX-9’s cabin envelops the driver that feels really special, even if that does mean a relatively high beltline and not a lot of clever cubbies or storage compartments. 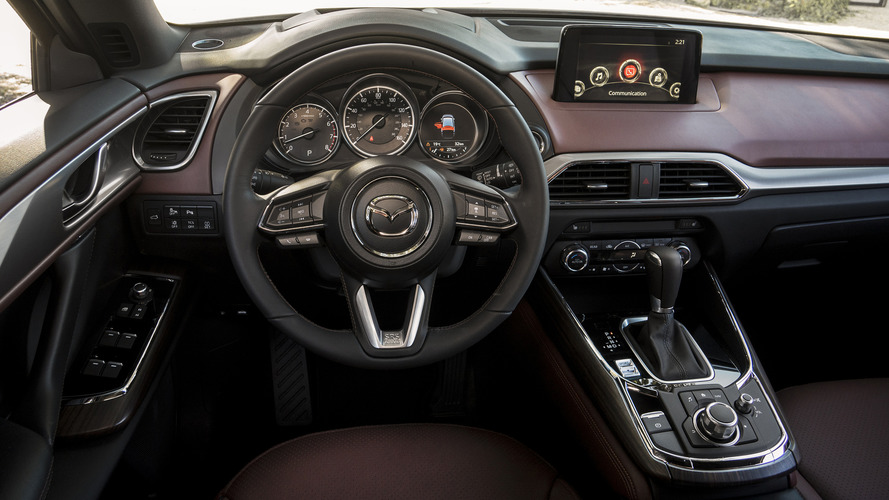 Mazda hasn’t always been known for supremely hushed cabins, but the CX-9 is a big step in the right direction.

It’s worth noting that the CX-9 is ridiculously quiet inside. Mazda says reducing NVH levels is a priority moving forward, and the proof is in the pudding with this new three-row CUV. Compared to the outgoing CX-9, an additional 53 pounds of sound insulation are found between the floor and the carpet. What’s more, paying closer attention to aerodynamics reduces wind noise. Mazda hasn’t always been known for supremely hushed cabins, but the CX-9 is a big step in the right direction.

But here’s the thing. In the same way that the Mazda3 suffers from a practicality standpoint compared to other compact cars, so does the CX-9 with the large crossover set. Passenger room in the second row is pretty okay for your five-foot, seven-inch author, but accessing the third row is super tough. Fold the rear benches flat and you’ll get 71 cubic feet of cargo space, which is smaller than everything else in the class. At 79 cubic feet, even the downsized GMC Acadia boasts more volume. 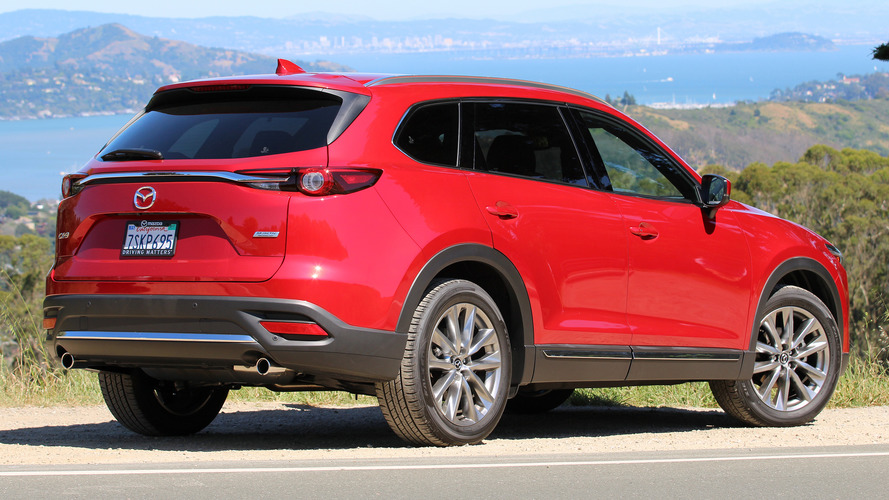 Here’s hoping buyers don’t mind sacrificing a bit of practicality for the sake of a good time behind the wheel.

On top of that, there are no clever or unique selling points in terms of family-friendly functionality. Second row captain’s chairs? Nope. Rear seat entertainment? Unavailable. I get it – Mazda’s whole position in each segment is to have the best-driving, best-looking offering. That’s certainly true with the CX-9, but in a class where functionality and usability are perhaps the most important attributes, this could really hinder the Mazda’s sales success. As far as pricing is concerned, the CX-9 is competitively placed within the segment. A front-wheel-drive Sport model starts at $31,520, and a loaded Signature AWD tops out at $44,015 (add $900 for destination).

Of course, it’s not like Mazda is planning to move a billion of these. Company executives are aiming for a production run of about 40,000 units annually in the first year, which is more than double the 18,048 examples Mazda sold in 2015. But that’s still a small portion of the overall CUV world – Ford and Honda moved 249,251 Explorers and 136,212 Pilots last year, for example. No, Mazda might not have the best all-rounder on its hands – not even close, really – but with sleek looks and great dynamics, the CX-9 is sure to find happy homes with folks who need a large crossover but don’t mind sacrificing a bit of practicality for the sake of a good time behind the wheel.