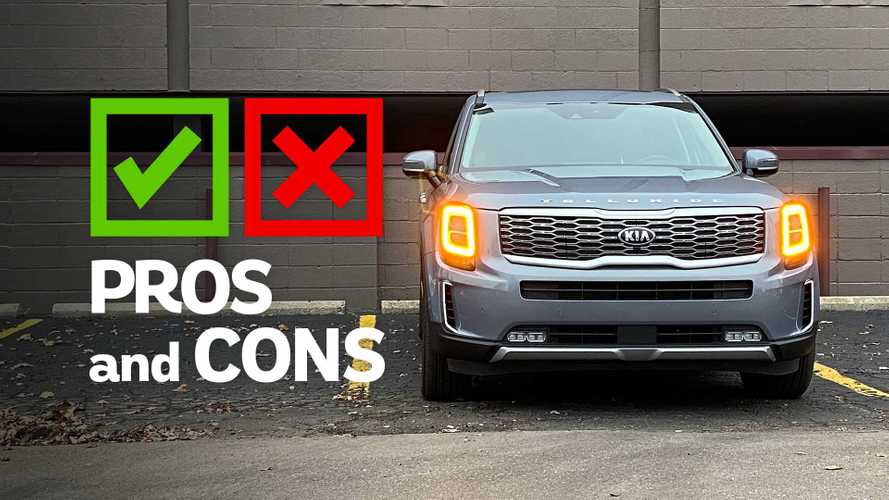 South Korea's two main automakers have been on a roll for the last several years, but there's been no vehicle from the Korean peninsula that's received such excessive praise as the 2020 Kia Telluride. To put it simply, this is the best vehicle in the country's most competitive segment.

It's so good that we struggled narrowing it down to three big, positive points. At the same time, this is such a competent effort that we resorted to picking nits to fill out the con section. After a week with the Telluride, it feels safe to call this the best, most complete product a Korean brand has ever built.

Even the basic Telluride has an impressive cabin filled with high-quality materials and an eye-pleasing design. Opt for the range-topping SX trim and add the $2,300 SX Prestige pack, and the interior is even better. Matte wood takes the place of painted plastic, and nappa leather replaces the standard hides (faux leather is standard on the Telluride LX and S). This feels like a cabin worthy of a luxury badge, not only from a material quality standpoint, but from the build quality. The Telluride feels well built, even in its first year on the market.

That previous point is all the more impressive considering the Telluride's appealing price tag. The base model starts at $31,890, while our SX tester with all-wheel drive and the SX Prestige package demands $46,090. That is tremendous value, compared to premium three-rows that match the Telluride's interior quality and mix of equipment. Against other mainstream vehicles, the Telluride SX is even more impressive. A Traverse High Country calls for $52,890, a Honda Pilot Elite asks $48,220, and the Ford Explorer Platinum starts at a scarcely conceivable $58,535 (although it has a significant power advantage, with its 400-horsepower V6).

Big, broad seats up front, a comfy set of captain's chairs in the middle, and a reasonably sized third row make the Telluride a smart choice. In particular, the second-row captain's chairs are the place to be, with class-leading legroom (a title the Telluride shares with its cousin, the Hyundai Palisade). The Chevrolet Traverse and Ford Explorer offer more space (31.4 inches for the Kia versus 32.2 and 33.5, respectively), but we'll happily trade the Traverse's modest advantage for the Kia's prettier, more premium cabin.

Yes, yes, yes, this is a three-row SUV – engines need to be adequate, not exceptional. The Kia's is definitely adequate, not to mention familiar. This is the same 3.8-liter V6 found in the Hyundai Palisade, packing a similar 291 horsepower and 262 pound-feet of torque. Equally familiar is the eight-speed automatic. The entire ensemble gets the Telluride about, although it's hardly exciting or engaging while doing so. It's not a particularly pleasant engine on the ears, either. Then again, aside from the Ford Explorer's twin-turbocharged V6, there aren't really any engines in this segment that sound good or are fun to exercise, so consider this con relative to the competition.

Kia lists the Telluride's cargo hold as offering 21 cubic feet of space with the third row of seats in place. That is among the very best in the segment. In practice, though, 21 cubic feet was barely enough for the bare minimum I take on the average two-night press trip. Flip the third row down and the hold expands to 46 cubic feet, which is more than enough space for several suitcases. This is not a complaint that's exclusive to the Telluride, although it's still frustrating having to choose between space for luggage and space for people.

Seats are a personal preference, but we found the front chairs in the Telluride flat and unsupportive. That's not to say they were uncomfortable, but if you prefer your car's seats to hug you, the Telluride doesn't really do the job. If Kia is listening, we'd love more side bolstering and a wider range of adjustments.