UPDATED: Ford responded to our questions about the base Explorer and its price, indicating it'd be available in a few months for both fleet and retail customers. This post has been updated to account for the new information.

The fifth-generation Ford Explorer was groundbreaking when it debuted in 2011. Its Volvo-derived, Taurus-shared D3 platform helped prove that the trend of unibody crossovers replacing body-on-frame SUVs was a matter of if, not when. But while its drivability and more aerodynamic style impressed at the time, the Explorer didn't age well. 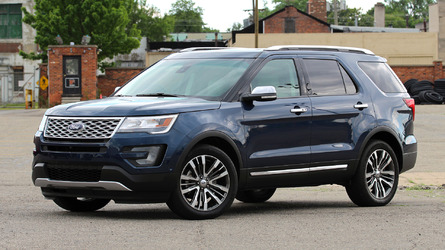 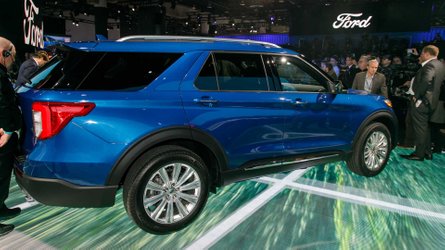 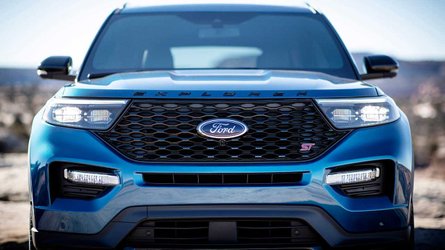 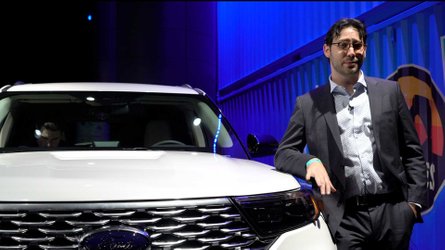 Despite its large footprint (the 2019 Explorer was longer and wider than the current Honda Pilot), the cabin felt small. The aging powertrain lineup featured a standard and inefficient V6 paired with a six-speed-automatic transmission. Or, it asked buyers to spend extra for a turbocharged 2.3-liter that offered slightly less power than the V6 and lacked the ultra-accessible low-end torque that makes turbo fours so popular. The interior went without the premium touches the competition has adopted, while the last Explorer was trailing the class in active safety by a wide margin.

The 2020 Ford Explorer is a clean-sheet rethink for the Blue Oval. Despite its evolutionary design, the latest Explorer's underpinnings mark a revolutionary change. Ford’s new modular rear-drive platform takes the 2020 Explorer into the electrified future with its available hybrid gasoline-electric powertrain, while simultaneously improving driving dynamics, increasing passenger and cargo volume, and allowing the adoption of advanced active safety systems. But some old problems remain, despite Ford’s redesign of this vital three-row crossover.

It is a charming engine, feeling strong throughout the rev range. It’s more than able to handle the Explorer’s mass both around town and at higher speeds, and it feels more eager, sounds smoother, and feels more refined than the Mazda CX-9’s turbocharged four-cylinder.

While the Explorer will take the fight to the gas-powered Toyota Highlander, it’s also taking aim at the Highlander Hybrid. Packing a new 3.3-liter V6 with an electric motor sandwiched between the engine and the transmission’s torque converter, as well as a 1.35-kilowatt-hour battery pack buried in the floor (so as not to eat into cargo space), the Explorer Hybrid offers a total output of 318 hp and 322 lb-ft of torque. Ford still hasn’t shared fuel economy on this (or any) powertrain, but the company has repeatedly said the hybrid can cover over 500 miles per fill-up of its 18-gallon tank, which would work out to a Highlander Hybrid-challenging 27-mpg estimate. That doesn’t mean you’ll want the hybrid, of course.

The hybrid can cover over 500 miles per fill-up of its 18-gallon tank. That doesn't mean you'll want it, of course.

We didn’t prefer this powertrain during our drive through the Columbia River Gorge that separates Oregon and Washington. The gas engine is loud, coarse, and unpleasant across the rev range. And aside from certain situations (climbing steep grades at lower speeds, for example), it lacks the satisfying sensations that come with driving a hybrid. There’s rarely that zero rpm pull from the electric motor. And while the Explorer Hybrid can shut the gas engine off entirely, it doesn’t happen often. The hybrid Explorer is also 624 pounds heavier than the version with the 2.3-liter gas engine, so while there’s more power and torque, the gas-electric model always feels slower than its four-cylinder sibling. The hybrid also tows less and adds $4,150 to the price tag of the Limited, the only trim it’s available on.

The cream of the Explorer’s powertrain crop is the twin-turbocharged 3.0-liter V6 Ford offers standard on every Explorer Platinum and ST. In Platinum trim, the engine mirrors the old Explorer Sport’s twin-turbo 3.5-liter V6 with 365 hp. It then adds 30 lb-ft of torque to the mix for a total of 380. A different tune blesses the ST with 400 hp and 415 lb-ft (look for a dedicated first drive of the Explorer ST on June 20).

This engine is a peach. Ample low-end power blends with the effortless high-end acceleration that typifies Ford’s EcoBoost V6 family. A sweet-sounding engine, too, it’s the towing champion of the Explorer range, handling 5,600 pounds to the 2.3-liter’s 5,300 and the Hybrid’s 5,000-pound capacity.

Much of our praise for the Explorer’s powertrains, though, comes down to the 10-speed automatic transmission that’s standard across the range. It’s a relative of the 10-speed in the Expedition, F-150, and Mustang, as well as a number of products from General Motors. Quick to engage off the line and capable of executing smooth, fast downshifts and upshifts, it has the best programming of any 10-speed in the Ford stable. That’s not an exaggeration, either. The execution on this transmission is excellent. We sincerely hope the Explorer team shares its notes with the Mustang’s powertrain engineers.

All four of the Explorer’s powertrains are available with all-wheel drive (it’s standard on the two 3.0-liter models), but if you pass on splitting power between the two axles, you’re rocking a rear-wheel-drive Explorer for the first time in a generation. But sending power to the rear wheels doesn’t magically transform the Explorer into something lively and exciting.

Sending power to the rear wheels doesn’t magically transform the Explorer into something lively and exciting.

Efforts to get it out of sorts failed on Washington’s dry and grippy roads – it felt as stable as any front-drive competitor. Worryingly, the Explorer suffers from an underdamped ride from the MacPherson-strut-front and multi-link-rear suspension that tries so hard to be comfortable and unobtrusive that the Explorer ultimately feels bouncy and detached on undulating roads.

Those same grippy roads made it difficult to assess road noise – we’ll have to wait until we get the Explorer on home turf to rate that. Wind noise, though, was a recurring issue, since Ford only used laminated acoustic glass on the windshield and front windows. While the automaker cited weight for the different glass types and a supplier issue for the especially poor wind noise, we noticed the Explorer Platinum, which gets laminated acoustic glass all around, was so much quieter and more pleasant than its siblings that we’d argue saving weight, at least in this case, was the wrong decision.

We can give a verdict on the interior, though, and to be entirely frank, it’s just fine. Not good, not great, not bad, regardless of trim. The XLT and Limited have very little differentiation, with just slivers of dash and door trim distinguishing the two. The Platinum gets a leather-covered dash that looks much nicer than the lesser cars’ and also ditches the wildly cheap and unattractive plastics that surround the climate control vents – a lowlight in a cabin that feels otherwise competitive. The seat material is fine throughout the trims, with typical cloth on the XLT model and standard leather on the Limited. But the range-topping Platinum’s hides certainly don’t feel worth the nearly $60,000 starting price. In truth, no amount of perforation or contrast stitching can overshadow that model’s eyebrow-raising price tag.

The cabin is functionally adequate, as well. The seating position is pleasant with a fair range of power adjustment on the Limited, although, like those chairs found in Ford’s dying car range and its smaller CUVs, the narrow, light bolstering makes it feel more like you’re sitting on the seats instead of in them. The second row is very pleasant, with standard captain’s chairs on every trim. The third-row bench isn’t especially spacious, but it feels competitive with the rest of the segment, with 32.2 inches of legroom. The Honda Pilot and Subaru Ascent have 31.9 and 31.7, respectively, although the Chevrolet Traverse trumps the Explorer with 33.5 inches of stretch-out space in its rearmost row. A power-operated third row is available on the XLT and standard on the Limited and above, and allows owners to easily expand the standard 19.8 cubic feet of cargo space to 47.9 cubes. Fold the second row and there’s up to 87.8 cubic feet. That compares favorably with Ascent (17.8/47.5/86.5) and Pilot (16.5/46.8/83.9), although again, the Traverse (23.0/58.1/98.2) wins out.

Our main critique of the cabin rests with its technology.

Our main critique of the cabin, though, rests with its technology. While the Explorer’s active safety is excellent. The implementation this Co-Pilot 360 Assist+ suite is class-leading. The full-speed adaptive cruise control is smart and composed and the lane-keeping assist with steering assistance keeps the Explorer in line without bouncing between lane markers like a ping-pong ball.

But the Sync3 infotainment system has somehow gotten worse. The standard 8.0-inch touchscreen looks and feels tiny, and suffers from information overload, especially while using the navigation. The poor design makes it difficult to follow directions, as well as to know where to look. At the same time, the only nav direction in the gauge cluster display is a tiny arrow and numerical distance indicator in the top left corner – there’s no dedicated navigation display in the gauge space, even with the haughtier 12.3-inch digital gauge cluster. The available 10.3-inch touchscreen isn’t as problematic, mainly owing to its extra real estate, although it lacks the ease of use and customizability of other big displays from Ram and Volvo. Also, its portrait-style setup looks cheap and tacked on, like someone nailed an iPad to the dash.

The Explorer’s price, however, is anything but cheap. While there’s a base Explorer priced at $32,765, it won't arrive for a few months. That price is competitive with the Chevrolet Traverse ($35,095), Honda Pilot ($33,350), and Subaru Ascent ($33,005), although the price tag balloons quickly if you select either of the Explorer's volume trims, the XLT and Limited.

And it’s going to be those powertrains that sell the Explorer. This is an adequate three-row family vehicle, but we’re not sure the bits that families normally care about – space, versatility, style, and quality – are enough to help it sell. It’s going to come down to the punchy 2.3-liter base engine, the excellent twin-turbocharged 3.0-liter V6, and the standard 10-speed automatic. These are things most of the competition can’t match while also offering the usual bona fides that have made the Explorer a decades-long success.