Jaguar scales down the F-Pace line and addresses its biggest issue.

The Jaguar F-Pace is one of those vehicles that I want to recommend to friends and family but never do. It's a great looking crossover, and for the most part, it drives as well as the competitive Mercedes or Audi. But since its debut, disappointing technology and a lackluster interior have held it back from the kind of wide-reaching appeal that alternatives like the GLC-Class and Q5 enjoy.

Jaguar is hoping to change that with the facelifted 2021 F-Pace. Even by the low standards of a refresh, there isn't much to say about the exterior and mechanicals. But in the cabin, and in particular how customers will interact with the technology and how Jaguar will sell its updated crossover, there's some excitement. The 2021 F-Pace is the vehicle we wish Jaguar had introduced so many years ago.

Considering that this is “just” a mid-cycle update, the 2021 F-Pace's cabin sees a pretty darn thorough redesign. The dash is essentially new from the windshield down, with a more level dash upper that better integrates the climate vents – their slats now span the width of the dash. Where the old F-Pace leaned on leather, a thick strip of trim separates the dash upper and vents from the lower section. An aluminum finish is standard, but the matte-finished Burl Ash is my favorite of the three optional $400 accents.

While the top of the dash is still black leather, the lower portion matches the upholstery (Light Oyster, in our tester's case). The door panels see a similarly big update, with black leather up top, wood or aluminum trim that matches the dash in the middle, and contrasting leather down low, with real metal speaker grilles on all models.

This stacking effect – black leather, wood trim, and contrasting leather, paired with contrast stitching on both the top and bottom portion – is richer and far more premium than the uniform black hides of last year's car. And matched with the aforementioned wood, rather than the cold and uninteresting aluminum that comes standard, the dash has a welcoming feel I haven't experienced on a Jag since the company retired the last XJ.

The F-Pace's center stack sees similarly huge changes. The center touchscreen grows from 10.0 inches to 11.4, and in the process eliminates the hard plastic bezels that topped the dash and divided the infotainment and climate controls in last year's model. While the new screen still has something of a tacked-on look to it, the slim borders are unquestionably more modern and the amount of real estate the display now occupies is a more efficient use of the center stack's width.

Below the new screen sits a small, simple plaque that reads:

This little touch might be my favorite element in the entire redesigned cabin, simply because it taps into the heritage that I believe drives people to old-world brands like Jaguar. There's history behind that name and badge – no shortage of romance that comes from being a 90-year-old British institution.

Jaguar contrasts that dose of the past with a heaping helping of the present, flanking touch-capacitive controls for the climate system with a pair of dials that adjust the cabin temperature and double as switches for the now-standard heated front seats (ventilation is still an option). While JLR's touch-capacitive functions have earned my scorn over the years, I'm happy to report that these new “buttons” have a very strong haptic feedback effect. There's no question of when or if the system accepted your input. 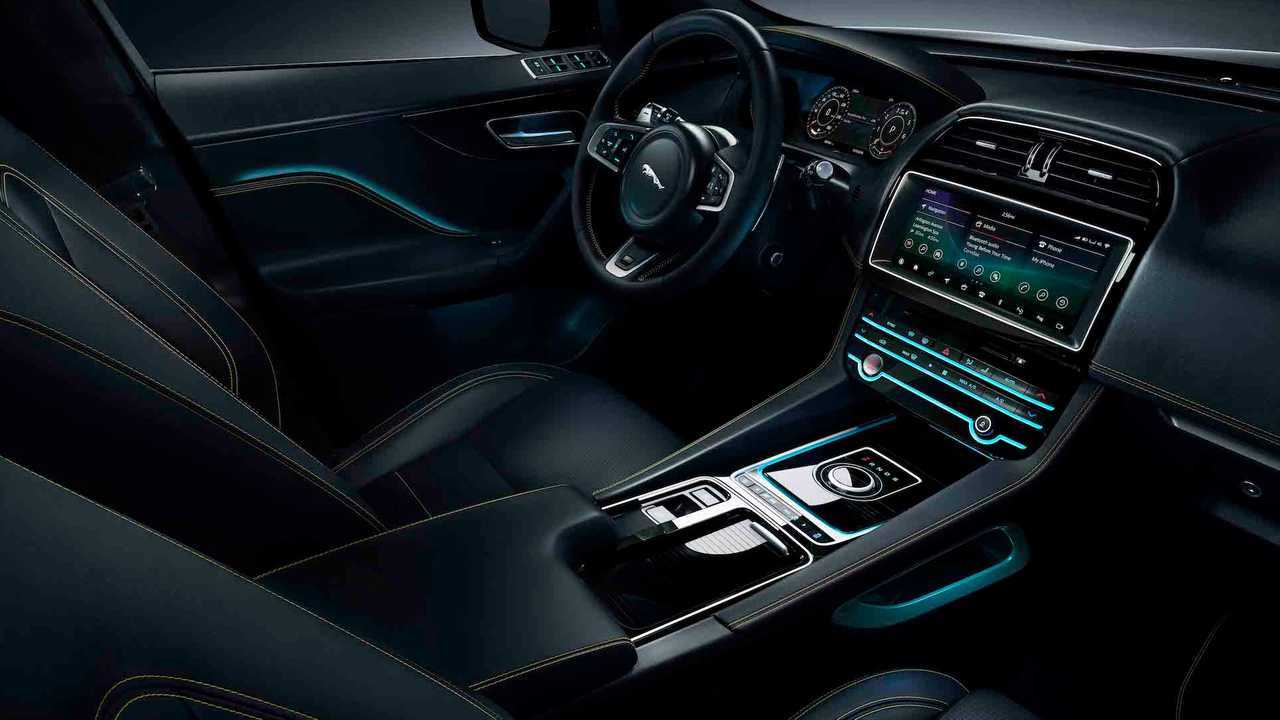 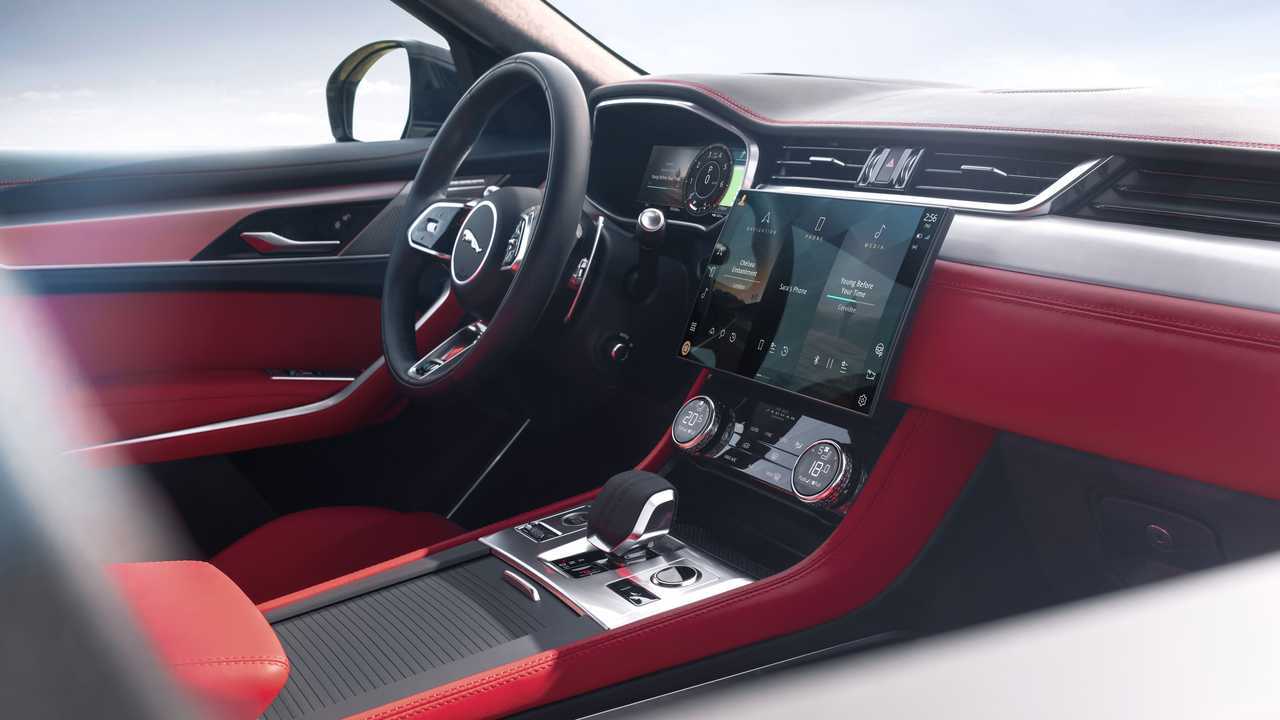 Finally, Jaguar's designers revised the entire center console, replacing the lost-its-cool rotary shifter with a new design that features a gorgeous leather finish and a pleasant action. Jaguar's designers say that leather finish draws inspiration from a cricket ball, but cricket scares and confuses my American brain, so I'll be taking their word for it. The electric shifter is reminiscent of the design on the Infiniti QX50, but it feels sturdier and has a button lock-out, so there's no chance of accidentally changing into Neutral.

The surround for the shifter and the finish on the center stack itself is aluminum that looks fantastic but also does a brilliant job of reflecting sunlight into the driver's eyes. I spent a good chunk of the drive route with my hand covering some unpleasant glare. Embedded in this new layout is a revised drive mode selector, which pops out of the console and has a strong detent and solid feel when moving through the available drive modes. Also aluminum? The large, wheel-mounted paddle shifters.

All told, Jaguar has handed in its long-overdue homework on this one.

Aside from the $400 wood, everything I just mentioned is standard across the board. Aside from the basic model, the F-Pace's three other trims (four if you count the SVR, which wasn't available to test) will wear standard Windsor leather upholstery. But if you want a dose of style, Jaguar will sell a perforated finish for $760.

Mid-range models pack diamond quilting, while the P400 R-Dynamic S I tested had a flashy geometric perforation and eye-pleasing contrast stitching on the soft hides. Alternatively, you can get a sporty set of performance buckets that offer that neat pattern for the same amount of money on the range-topping model. All told, Jaguar has handed in its long-overdue homework on this one.

Thank You For Coming To My Tech Talk

The F-Pace's larger touchscreen adopts the same Pivi Pro infotainment system that Jaguar Land Rover introduced on the Defender last year. The F-Pace, though, leads the charge with a new, larger, curved 11.4-inch display as standard.

Aside from offering more screen than the Defender’s 10.0-inch display, it uses a different aspect ratio (likely 4:3 in the Jag versus 16:9 in the Defender). Pivi seems better suited to the Jag's screen, though. The tiles and icons are easier to distinguish and the F-Pace's display does a better job of showing off the system's pleasant bronze color scheme. The screen felt more responsive to inputs than the two-door Defender 90 I tested later in the day (don’t worry Land Rover fans, the 11.4-inch display is coming to the 2022 Defender as an optional extra).

A 7.0-inch display is standard in the instrument cluster, giving all owners an extra 2.0 inches of screen real estate compared to last year's car, although the optional 12.3-inch all-digital cluster is still the obvious choice. It's versatile and attractive, offering plenty of functionality once you get over the initial learning curve – archaeologists haven't discovered the Rosetta Stone that will translate the nonsense hieroglyphics on the Jag's touch-capacitive steering wheel buttons quite yet.

Beyond those updates, the F-Pace adds a host of standard equipment across the board, including blind-spot monitoring, a wireless charge pad, heated front seats, satellite radio, proximity entry, automatic high beams, a surround-view camera, and a panoramic roof.

The Familiar Things Are Still Good

On the flip side, owners will need to adjust to a scaled-down lineup. Jaguar has reduced the number of F-Pace derivatives from 12 to just five (including the SVR). While there will still be a host of option packages, interior upholstery and trim pairings, exterior colors, and standalone upgrades, that's a dramatic reduction in production complexity.

While Jaguar didn't have any for me to test, there are two four-cylinder trims which share the same turbocharged 2.0-liter engine. The 296-horsepower version of this engine is gone, and in its place is a four-pot F-Pace that produces 247 hp and 269 pound-feet of torque across the board. The six-cylinder lineup has shrunk to two offerings as well, with a P340 S model packing 335 hp and 354 lb-ft, while my P400 R-Dynamic S tester sings to the tune of 395 hp and 406 lb-ft of torque.

Jaguar has reduced the number of F-Pace derivatives from 12 to just five (including the SVR).

This simplified roster should be good for Jaguar from a manufacturing perspective, but it's also a boon to consumers who no longer need to understand the differences between the 25t and 35t or why they might want a Premium rather than a Prestige, Portfolio, or R-Sport. Whichever product planning schmuck came up with that trim walk deserves a rap across the knuckles by a Victorian governess.

As for what the refreshed F-Pace is like to drive? Well, it's pretty much the same. The P400 has slightly more power than last year's P380 – the mild-hybrid, turbocharged 3.0-liter straight-six is up 15 hp, but a whopping 74 lb-ft over the outgoing supercharged V6, so it pulls off the line with more urgency. Despite the added twist, though, the stopwatch situation is the same. Sixty miles per hour arrives in 5.1 seconds, although running from 50 to 75 happens in 3.2 seconds rather than 3.5. The soundtrack is silky smooth, with the rich howl that only comes from sticking the cylinders in a line.

Looking Back On F-Pace: 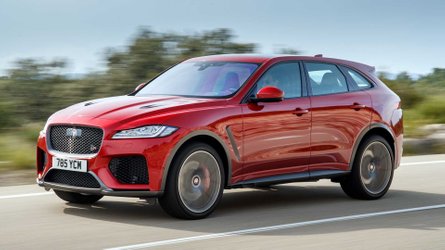 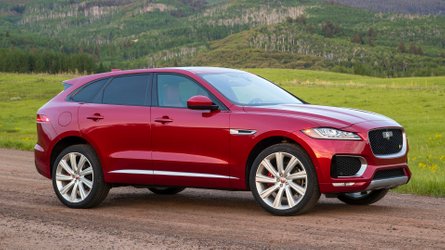 The eight-speed automatic is a newer version of ZF's excellent 8HP and remains a champ, with quick shifts, predictable behavior, and a willingness to hold gears even in Comfort mode. The handling profile is thankfully unchanged, with the F-Pace preserving its solid balance of ride comfort and agility, as all trims share a double-wishbone front and integral-link rear suspension. The R-Dynamic comes standard with 19-inch wheels which shield larger front brakes (15.0 inches to 14.0 on last year's car).

With the revised interior and simplified trim lineup, Jaguar took the opportunity to rejigger pricing. The base F-Pace now starts at $49,995, up from $45,200 on last year's car. Considering the heavily revised interior and upgraded tech suite, that seems fair. The R-Dynamic I tested, meanwhile, rings in at $65,200, or $3,100 more than last year's car. Again, this seems like a steal, thanks to the aforementioned cabin/tech changes and the boatload of extra torque.

All told, the 2021 Jaguar F-Pace represents a vastly more competitive product from a brand that needs a win. This refresh better captures the interior qualities that the British brand has stood for over most of its nearly 90-year history, and it positions the F-Pace to finally compete across the board with the competition from Germany. As I said at the start, this is the vehicle Jaguar should have introduced way back in 2015.