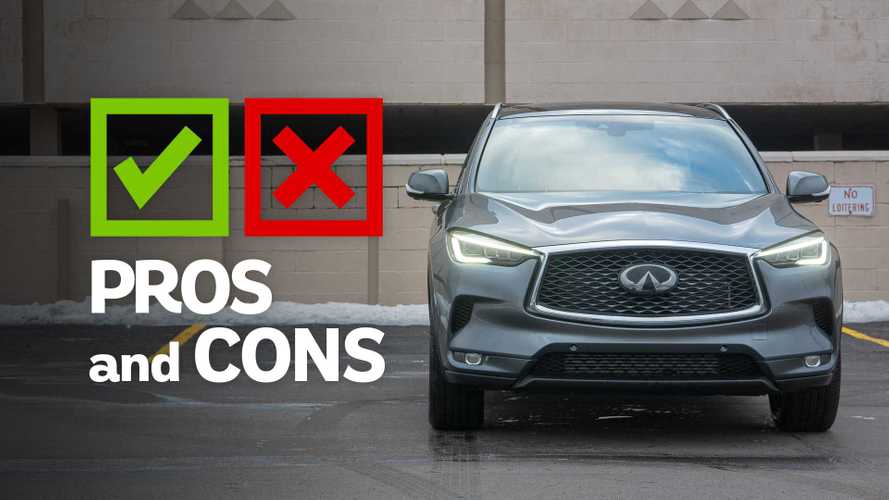 Like increasingly desperate armies throwing more advanced weapons at each other, premium automakers are coming to market with stronger, smarter, more stylish crossovers. That’s a boon for consumers, who are spoiled for choice.

Acura RDX Vs. Infiniti QX50: The Best Of Their Brands

One of the smartest choices is the new second-generation Infiniti QX50, a vehicle that blends the brand’s bright future with it’s cloudy, confused past. This is a handsome vehicle, and with tech like the brand’s ProPilot active safety system and the world’s first variable-compression engine, it’s a deeply intelligent one, too.

But a dimwitted infotainment system, a woeful shift lever, and an odd cabin styling detail temper what would otherwise be ebullient praise. The good news for Infiniti is that our main complaints are relatively easy to fix.

Infiniti is building some striking cars, and the QX50 is the prettiest yet. Perfectly proportioned with curves in all the right places, this CUV distinguishes itself from other Infinitis by keeping the brand’s style trademarks under control. Designers toned down the wild grille and aggressive lines around the greenhouse. The result is a vehicle that’s distinctive, but not shouty. This is pretty design rather than overwrought styling.

Nissan’s ProPilot active safety system makes its way to Infiniti, and it’s one of the most convincing reasons to consider the QX50 (despite the $2,000 base price and the $1,750 in prerequisites it requires on our Essential trim). Blending an entire suite of active safety gear that drivers can activate and deactivate at the press of a button, ProPilot is unobtrusive, and certainly on par with Volvo’s Pilot Assist system for ease of use and likability.

The QX50 was the first Nissan-Infiniti product to get the automaker’s innovative variable-compression engine. We won’t bore you with the technical mumbo jumbo, but suffice it to say that this engine can constantly adjust its compression ratio based on the situation. Heavy throttle results in lower compression for improved power, while steady state freeway cruising drives the compression up for improved efficiency. The system works invisibly, balancing the wants of the driver without compromising fuel efficiency.

Some automakers (Audi, for example) are just starting to figure out how to make two-screen infotainment systems tolerable, but Infiniti is pretty far away from that achievement. The QX50’s two-screen setup, like the Q50’s, is dense and suffers from far too many menus. It’s also not very pretty, both in a graphical and material sense. The cheap-feeling plastic buttons in their piano-black finish are bad, but the poor graphics from the displays are worse.

Electric shift levers and other interfaces make sense from a packaging perspective – they give designers and engineers more leeway when designing a center console. But the number of remarkably poor executions boggles the mind. Infiniti’s is among the worst I’ve seen since the disaster Chrysler shifter that led to the tragic death of Star Trek actor Anton Yelchin. I’m amazed that such a poor design made it to production.

It’s “normal” in that drivers push forward for reverse and pull back for drive, with the shifter returning to the center position after each input. But rest your wrist on the lever, even accidentally, to interact with the lower display and you’ll run the risk of bumping the transmission into neutral. This happened repeatedly during testing, around town, at freeway speeds, and without us realizing anything had happened until we pressed on the gas pedal – NHTSA has issued recalls for less.

Simply push the shifter forward slightly just for a second and, bang, you’re in neutral. Getting the lever out of park still requires the driver’s foot on the brake, thankfully, but if the car is already in neutral, the brake isn’t necessary to access Reverse or Drive. We sincerely hope Infiniti addresses this remarkably bad piece of design before someone gets hurt. All it’d take is a trigger lockout.

In general, the QX50’s interior is gorgeous, particularly in our range-topping example, which features the Autograph package. White leather lines the seats with splashes of blue Alcantara on the dash and center console. But there’s a strip of wood that runs from the doors to the dash that left us scratching our heads. See, it’s two different colors. The dash wood has more brown than the starker, whiter door wood. Why? Why is this a thing? There’s no earthly reason we can think of for such a decision. This is, admittedly, a small gripe, but the kind of bizarre choice that gnawed at us during our week behind the wheel. 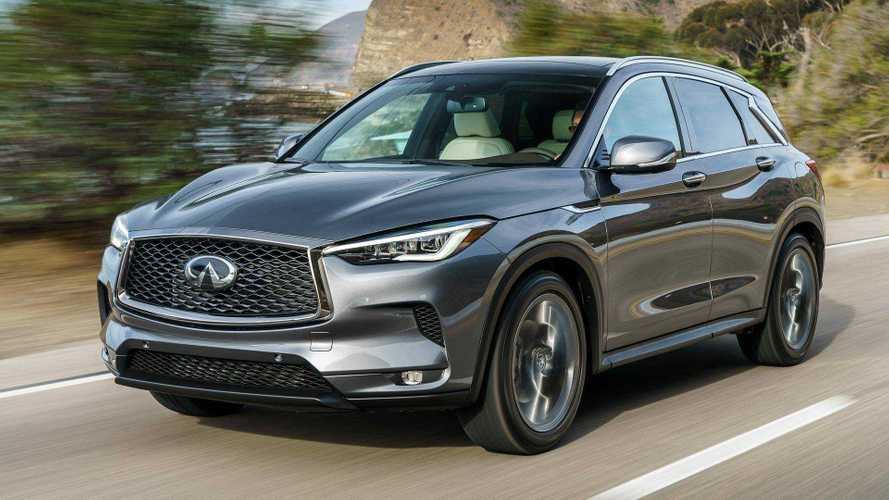