Not quite an SVR, but a stirring performance SUV nonetheless.

You'll find Jaguar Land Rover's epic supercharged, 5.0-liter V8 in everything from the Jaguar F-Type sports car to the large-and-luxurious Range Rover Sport. We love this engine – it's powerful, silly loud, and can launch even the largest vehicles to 60 miles per hour with sports car-like speed.

So last year when Land Rover announced a Range Rover Velar SVAutobiography Dynamic Edition with the brand's V8 underhood, the combo sounded like performance SUV perfection. And after a week behind the wheel, we can attest: this Velar comes close to it.

Though it's no full-blown SVR like its Jaguar F-Pace cousin, the Velar SVAutobiography still gets a laundry list of performance upgrades. That includes a 550-horsepower engine, an SVO-tuned suspension, bigger brakes and wheels, and an active exhaust system. Paired with a posh, comfortable cabin, and the high-powered Velar attains a near-perfect blend of performance and luxury.

Like the exterior, the Velar's cabin doesn't stray much from the base model visually. The same dual-touchscreen center stack and handsomely quilted leather seats – in this case, ebony and tan-colored – carry over. The only big differentiator is the SVAutobiography's sportier steering wheel and a metal paddle shifters. Otherwise, the Velar SVAutobiography Dynamic Edition is as pretty, if not a bit prettier, than its base sibling.

Not only do the Velar's ebony-colored, quilted Windsor leather seats look good, but they're also supremely comfortable. With 20-way electronic adjustability, heating and cooling abilities, and even a massage function, it's impossible to be uncomfortable. Even the second row is heated and offers minor fore and aft adjustability.

There’s also a good amount of storage room behind the second row. The 29.0 cubic feet is down compared to the base Velar’s available 34.0 cubic feet, but that’s still better than most alternatives. And for the most part, the cabin is whisper quiet.

It's 2020, and Land Rover still uses an outdated, Microsoft-powered infotainment system. While the dual touchscreens look pretty, the user interface on the upper 10.0-inch touchscreen is especially poor; the screen is laggy, unresponsive to touch inputs, and prone to freezing. The lower 10.0-inch screen is better, since it mostly handles simple functions like climate control, drive modes, and seating positions, but it's still imperfect and slow.

But that's really our only complaint. The graphics on both screens, at least, are crisp and the cabin is feature-rich. Apple CarPlay and Android Auto come standard, an intuitive head-up display is available as an option ($970), and there's a large 12.3-inch digital instrument cluster that's very versatile, able to display everything from navigation and audio to driver assistance features. Buyers can even connect to Land Rover's InControl Remote function, which lets them monitor things like fuel mileage, and interact with their vehicles via smartphone or smartwatch app. And the 17-speaker Meridian sound system is pretty bangin.

The 550-horsepower Velar SVAutobiography is an absolute riot. It rockets off the line with urgency – the tweaked all-wheel-drive system now sends up to 100 percent of power to the rear wheels. The Range Rover hits 60 miles per hour in 4.3 seconds and a top speed of 170. It's no more powerful than the F-Pace SVR with the same engine, and only two-tenths of a second slower to 60, but the Velar feels just as quick. This thing is just stupid fast.

The SVAutobiography also gets a new Variable Active Exhaust system which not only sheds 15.6 pounds from the standard setup, but also helps the V8 belt out a sonorous sound under pressure. Second only to something like an SVR product, this Velar sounds ridiculously good with the gas pedal flat and the drive mode selector ticked to Dynamic. 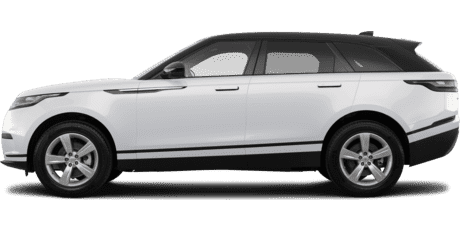 Add to that firmer air springs and tweaked adaptive dampers and the Velar shows improvement in the handling department. It's still isn’t as sharp as something like a BMW X5 M or Audi SQ8, but the SVAutobiography has noticeably less body roll than its base sibling, a quicker turn-in, and better-weighted steering. Plus the brakes are much chunkier, growing from 13.8 inches to 15.5 inches in the front, and 12.8 inches to 15.6 inches in the rear – so this Velar stops as well as it goes.

And if you want to off-road the Velar SVAutobiography, you can. In theory. The SUV’s standard air suspension increases the Velar’s ride height by 1.7 inches in any of the three dedicated off-road modes (Rock, Crawl, and Sand), and there’s even a nifty front-facing camera for especially tricky trails. We used the front-facing camera once to circumnavigate street flooding, but with the optional 22-inch wheels and rubber band-thin Pirelli Scorpion Zero all-season tires (sized 265/45R-21), we dared not take the Velar off-road.

For 2020, every Range Rover Velar now comes standard with active safety features like automatic emergency braking and lane-keep assist, as well as passive equipment like rear cross-traffic alert and traffic sign recognition. Our tester’s $1,300 Driver Assist pack adds a 360-degree camera and adaptive cruise with steering assist. ACC worked especially well on the highway in our test; when not bombing it, the Velar keeps a steady pace to the car in front of it.

The Velar SVAutobiography’s supercharged 5.0-liter V8 and all-wheel-drive system aren’t the most efficient combo, but that’s obvious. The sporty SUV gets just 15 miles per gallon city, 20 highway, and 17 combined on premium fuel.

Compared to some other alternatives, though, that’s just bad rather than terrible. The 707-horsepower Jeep Grand Cherokee Trackhawk gets just 13 miles per gallon combined. The F-Pace SVR with the same engine, the BMW X5 M, and the Maserati Levante Trofeo each get just 15 miles per gallon combined. And the Audi SQ8 matches the Velar at 17 combined. But if you really want a fast SUV that’s also eco friendly, just get a Tesla Model X Performance.

A $96,570 Range Rover Velar certainly isn’t the definition of affordable. But what’s great is that Land Rover gives you nearly everything you want at the $90,790 starting price. Our tester has just over $5,000 options, which includes things like the $1,300 driver assist package, the $1,300 wheels, the $970 head-up display, and a few others.