Acura’s compact crossover gives us hope for the future of the Japanese luxury brand.

Following a redesign last year, the third-generation Acura RDX enters its second model year with no notable changes. Generally, that’s fine by us, as Acura’s compact crossover features attractive looks (especially in A-Spec trim), a quality cabin, and a gem of an engine.

Still, the RDX isn’t devoid of demerits. The model’s center stack and infotainment system suffer from ergonomically questionable controls, while its steering and brake pedal feel strangely artificial. That said, there’s no ignoring the RDX’s value relative to many of its pricier peers.

The latest Acura RDX is also the best looking Acura RDX. Thank the loss of Acura’s infamous beak grille for a more pleasing style pentagon design, which complements standard LED headlights and voluptuous front fenders. The attractive details continue to the vehicle’s sides, too, where the upper windowline merges with the rear window, and liberal use of body-side lines emphasize the RDX’s sense of motion without diluting the crossover’s elegance.

Additional handsomeness comes courtesy of our test vehicle’s A-Spec package, which adds $6,200 to the entry-level model’s $37,600 base price. Alongside a host of comfort and convenience features, the package includes a snazzy set of 20-inch wheels, more aggressive front and rear fascias, larger tips for its dual exhaust outlets, and gloss black accents for the headlights, taillights, grille, window trim, and side sills.

Things are less impressive inside the RDX. While the crossover’s basic interior design is generally attractive, its ergonomics suffer due to the massive drive mode controller that takes up far too much space on the center stack and too small buttons for the climate and stereo controls. At least the A-Spec package adds nice details to the cabin such as white and red gauges (although we found them hard to read on sunny days), perforated leather on the steering wheel, larger steering-wheel-mounted paddle shifters, metal accelerator and brake pedals, and dark-tinted brushed aluminum trim. 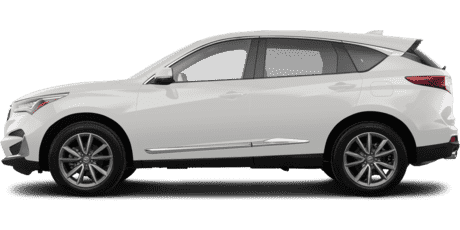 On paper, the RDX’s passenger dimensions are merely class competitive. In practice, though, Acura’s compact crossover is arguably one of the luxury compact crossover segment’s most comfortable options. Credit supportive supportive seats with ample cushioning. Save for the middle position on the 60/40-split rear bench, the RDX’s two front buckets and outboard rear seating positions are fine places for weary riders to rest. Opt for the A-Spec model, and the RDX adds tasteful faux suede to its seats, as well as available Madder Red leather.

Cargo space is similarly impressive, with 29.5 cubic feet of it with all seats in place, not to mention an underfloor storage compartment that hides 1.7 cubes of additional space. Fold the rear seat backs and the RDX reveals a full 58.9 cubic feet of space. Although the Acura is a few cubes off the likes of the Infiniti QX50 (31.4 cubic feet with all seats in place, 65.1 with the rears folded) and Cadillac XT5 (30.2/63.0 cubic feet), it’s noticeably larger than popular competitors such as the Mercedes-Benz GLC 300 (19.4/56.5 cubic feet) and the Lexus NX 300 (16.8/53.7 cubic feet).

Like its competitors, the RDX relies on a turbocharged 2.0-liter four-cylinder engine for motivation. Front-wheel drive comes standard, although all-wheel-drive is a $2,000 option. Dubbed Super Handling All-Wheel Drive (SH-AWD), the RDX’s all-wheel-drive system sends up to 70 percent of power to the rear axle, as well as to each individual rear wheel.

No matter the drivetrain, the engine produces the same 272 horsepower and 280 pound-feet of torque, which it distributes to the drive wheels by way of a 10-speed automatic transmission. With seemingly no turbo lag and a torque peak that holds steady from 1,600 to 4,500 rpm, the forced-induction four moves the 4,015-pound RDX A-Spec with impressive authority. It also produces a surprisingly sweet sound at wide-open throttle.

More irksome is the Acura’s transmission. Its 5.25:1 first-gear ratio is annoyingly short and makes the crossover feel far too eager off the line – even during lackadaisical driving. Unfortunately, the RDX starts off in first-gear in its Comfort, Sport, and Sport Plus drive modes (we didn’t fiddle with Snow mode in the heat of South Florida). The gearbox is also prone to hunting around its upper ratios at highway speeds as it attempts to balance power and fuel efficiency.

Nevertheless, boot the accelerator pedal to the floorboard to make a pass and the transmission quickly drops down a cog or four (both 10th- to sixth-gear and seventh- to third-gear downshifts are possible). Plus, there’s a set of steering-wheel-mounted paddle shifters for additional driver control.

Despite its sporty pretense, the A-Spec makes do with the standard dampers of lesser RDX models. Only the top-of-the-line RDX Advance includes adaptive dampers. Predictably, the RDX A-Spec rides somewhat stiffly on its model-specific 20-inch wheels and tires. At least its cabin proves impressively tranquil thanks to appropriate mitigation of exterior noises.

While the RDX’s communicative chassis and advanced all-wheel-drive system do a fine job of pushing the crossover through corners, the high-riding hatchback struggles to inspire driver confidence. Blame the Goodyear Eagle RS-A all-season rubber and the RDX’s electric-assist power steering. The latter’s rack-and-pinion setup relies on two pinions – one receiving inputs from the driver, the other from an electric motor – and a ratio that varies from 15.1:1 on-center to 12:1 at full-lock, the combination of which curses the RDX with artificially light steering that fails to add appropriate heft in turns.

Similarly, the RDX’s electric brake booster makes for a left pedal that’s both too touchy and somewhat wooden in its actions. Although the RDX never seems short on braking capability in day-to-day driving, the brake pedal’s wonky modulation often makes it difficult to judge the correct amount of pedal pressure required to bring the crossover to a smooth halt.

Dubbed the True Touchpad Interface, the setup offers absolute positioning with the dash-mounted 10.2-inch screen. Users don’t guide a cursor to an on-screen button, but instead place their finger on the touchpad at the equivalent position of the on-screen button. The bad news is that it’s difficult to navigate to center-screen features in one try. However, it’s very easy to navigate to functions at the corners of the screen. With the right arrangement of functions, it’s possible to navigate the RDX’s infotainment system without taking your eyes off the road. Even so, the setup would benefit from the addition of a touchscreen.

Still, the RDX’s infotainment system has its merits, including crisp graphics, logical on-screen menus, and a welcome split-screen function, which allows two different functions to display simultaneously. The setup is also Apple CarPlay compatible. Android Auto, however, is unavailable; strange given the operating system is Android-based.

While navigation is missing from the entry-level RDX, the feature comes standard on Technology, A-Spec, and Advance trims. With it comes a GPS-linked dual-zone automatic climate control system that automatically makes temperature and fan-speed adjustments based on the sun’s position relative to the RDX’s driver and front-seat passenger.

Similarly, RDX Technology, A-Spec, and Advance trims trade the standard nine-speaker audio system for one of two available premium ELS Studio systems: a 12-speaker setup in the Technology and a 16-speaker variant in the A-Spec and Advance models. No matter the trim, though, every RDX includes a 7.0-inch display in the gauge cluster. Alas, Acura limits the RDX’s 10.5-inch head-up display to the high-end Advance model.

Every RDX features a full-suite of advanced safety items that includes a forward collision warning system with automatic emergency braking, lane-departure warning, lane-keeping assist, lane centering, adaptive cruise control with stop and go, and automatic high-beam headlights. While the base RDX does without a blind-spot monitor, a rear cross-traffic alert system, or front and rear parking sensors, RDX Technology, A-Spec, and Advance models include all three items. Additionally, Advance trims receive a surround-view camera. LED headlights and taillights are standard across the line, however, only A-Spec and Advance models include a set of fog lights (they’re LEDs, of course).

In spite of its reasonable price, the entry-level RDX comes well equipped and includes convenience features such as a panoramic moonroof, dual-zone automatic climate control, heated seats, and a proximity key with push-button start. Leather seats are noticeably missing from the base RDX, which instead wraps its chairs in faux leather.

Spending $3,200 on the Technology trim, however, adds genuine hides, as well as the likes of a blind-spot monitor, rear cross-traffic alert system, front and rear parking sensors, an in-dash navigation system, and two USB charging ports in the rear of the cabin (in addition to the two up front). Opting for the A-Spec model tacks another $3,000 to the bill and includes all the goods of the Technology trim, as well as trim-specific exterior and interior details, 20-inch wheels and tires, LED fog lights, and ventilated front seats.