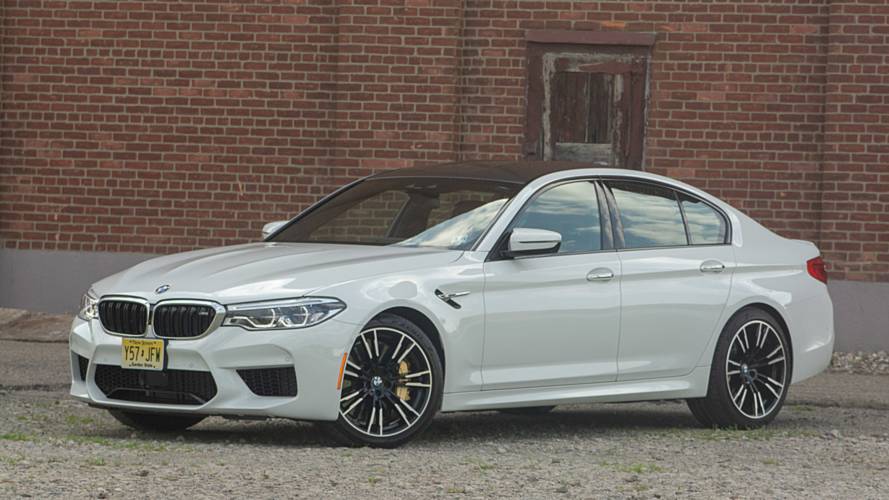 What happened to BMW? The German brand dominated the 1990s through the mid 2000s with compelling products that set the bar for premium vehicles that blended luxury and driving pleasure. It was the halcyon days for The Ultimate Driving Machine.

But then something changed. BMW started to lose its way. The vehicles lost their iconic driving character as turbocharged engines replaced the brand's naturally aspirated options, electric steering supplanted BMW's traditionally fantastic hydraulic racks, and weight and size increased. At the same time, rivals Mercedes-Benz and Audi were rising, the former offering stunning interiors and luxurious driving experiences while the latter emphasized technology and a pleasantly conservative style.

Straight-Piped 720-HP BMW M5 Sounds Like A Tractor, In A Good Way
⠀

But as we found after driving the updated X4, things are getting better in Bavaria. But better than some odd crossover-coupe-thingy, the new M5 is the latest piece of evidence that BMW is back.

Prices for the 2018 BMW M5 start at $102,600, which is absolutely not cheap. But refreshingly for a German brand, BMW doesn't nickel-and-dime M5 customers to death. There are relatively few options available, although our test car had most of them.

The big-ticket items are the upgraded leather interior – our tester has the Aragon Brown color scheme and the leather is Merino – for $3,500, the $1,700 Driving Assistance Plus Package, the $4,000 Executive Package, a $3,400 Bowers and Wilkins audio system, and of course, the $8,500 carbon-ceramic brakes. Our tester passed on the $2,200 rear-seat entertainment package, the $2,300 night vision system, and the high-priced BMW Individual paint, leather, or trim. Our total as-tested price – including the $995 destination charge and the $1,000 gas-guzzler tax – was $129,795.

The trend in the auto industry is to offer virtually identical vehicles in small, medium, and large formats, so it's little surprise the current 5 Series looks like a (slightly) scaled down 7 Series. Going with the M5 adds the usual visual enhancements.

The standard wheels are 19 inches tall, but our tester wore a $1,300 set of 20s, while the front and rear fascia are more aggressive, four exhaust pipes jut out the back and flank a diffuser, and side grilles spout from the flared front wheel arches. In our tester's Alpine White, though, the effect of these changes is modest – the M5 is an attractive car, if not a terribly original or exciting piece of design.

There are individual elements that stand out, though. Those side grilles, for example, are lovely little touches that look modern and clean. The aerodynamic mirrors, too, are fantastic pieces of design that regularly put a smile on our face every time we checked them out. And while it's a pricey option, the huge gold calipers for the carbon-ceramic brakes are supremely cool. We'd almost stick with the stock twin-five-spoke wheels just to get a better view of them.

The latest 5 Series elevated BMW's interior game with a vodka bar's worth of reconfigurable LED accent lights (including in the friggin' speaker grilles!); handsome, premium leathers; and just the right amount of wood, aluminum, or carbon fiber. This is a remarkably nice place to spend time whether you're shopping for a family friendly 540i or something like our M5 tester.

Everywhere you look, there are high-end materials. The leather on the dash, doors, and seats is soft to the touch and pleasantly padded, while the standard contrast leather on the M5's heavily bolstered seats looks great. We're suckers for a black-and-tan color scheme so it's little surprise we dig this particular M5 so much.

Want more from the M5?

As silly as it sounds, the extensive ambient lighting is a particular highlight that makes the M5 (and the broader 5 Series line) feel much more special. With monotone and contrasting color schemes for owners to choose from, not to mention the swirly light treatments in the speaker grilles, the 5’s cabin feels futuristic without feeling foreign or overwhelming.

The M5's front seats boast 20-way adjustability as standard and offer abundant support without sacrificing long-haul comfort. We wish the seating position were a little lower, though, particularly after spending the previous week sitting on the floor of a Porsche Panamera Turbo Sport Turismo. It occasionally feels like you're riding atop the M5 rather than in it.

Going with the M5's Executive Package also adds ventilation and massaging functions to the front chairs. The massagers are nice – as they typically are – but the three-stage ventilation felt inadequate, particularly as Detroit was facing a near-triple-digit heat wave during our testing.

We also weren't fans of some of the control layouts. The M5's shifter, for example, is different simply for the sake of it. Like M cars of the past, it slides right for Drive, left and up for Reverse, and sits in the middle for Neutral. Thankfully, there's a dedicated Park button for this generation. And the additional display for the climate control system feels unnecessary, a change made because it was a nice design rather than being pleasant to use. Unfortunately, the display itself looks low-res alongside the expansive iDrive display at the top of the center stack. At the very least, the M5's multitude of touch-capacitive buttons look and feel good.

The heart of the M5's tech systems is the latest version of the iDrive infotainment suite. Managed via a 10.2-inch touchscreen (don't worry, the old-fashioned but remarkably satisfying knob and dial is still available), it's the nerve center of the audio and telematics system, as well as the place to go to switch the all-wheel-drive M5 into tail-happy two-wheel-drive mode and make other adjustments to the two customizable drive modes, M1 and M2.

iDrive stopped being a joke nearly a decade ago – today, it's one of the best infotainment systems on the market. Pretty, responsive, and easy to learn and interact with thanks to the traditional controls, iDrive also boasts a couple futuristic technologies that set it apart from the field.

The first is wireless Apple CarPlay. Simply flip an iPhone's wifi signal to “on,” and prompts lead you through the entire pairing procedure. After that, all you'll need to do is hop into your 5er and CarPlay automatically pairs up. It works well, mostly. We noticed some lag, as well as one particular drive where CarPlay simply had no interest in connecting. And if you're in and out of the car constantly and don't have wifi on, like we were when shooting photos, prepare for a barrage of notifications suggesting you flip the switch so CarPlay and iDrive can do their thing.

Gesture controls also arrived as part of the 5 Series redesign. For M5 owners imagining themselves making Tony Stark-like swipes and swats through the air, the reality is as disappointing as Iron Man 2. There are only a pair of gestures available, and the system's ability to recognize the twirl of a finger and increasing volume accordingly is hit or miss.

Those aforementioned drive modes distinguish the M5 from lesser 5 Series models. Activated by the red buttons above the 3 and 9 o'clock spokes of the steering wheel, M1 and M2 allow drivers to rapidly switch between customized drive modes. For example, during our testing, M1 was our dedicated highway cruise setup, maintaining maximum power from the 4.4-liter, twin-turbo V8 and the speediest of three shift modes from the eight-speed automatic, but setting the suspension to its most relaxed and adopting the lightest steering effort. But tap M2, and the suspension and steering immediately went into their most aggressive, the stability control loosened up, and the 4WD Sport mode kicked on.

With 600 horsepower and 553 pound-feet of torque from a 4.4-liter, twin-turbocharged V8, the M5 can hit 60 miles per hour in just 3.2 seconds, while properly equipped examples can carry on to 190 miles per hour. We feel obligated to remind you that those figures are for a vehicle that weighs nearly 4,400 pounds and can carry four adults in extreme comfort.

The M5 is hysterically quick. Torque is effortless and the power doesn't relent until well beyond reasonable speeds. The 8-speed automatic is complicit in this performance – it's remarkably quick and eager when set to the most aggressive of its three shift modes. Finally, the M5's new all-wheel-drive system guarantees that all of this fury arrives without a lick of drama – this BMW simply hunkers down and launches forward, not ferociously, so much as with extreme purpose. This car means business.

We could go on for a week about how good the M5 is when pushed and how it handles far better than a vehicle this big has any right to be. It's a riot. But flip the suspension and steering out of their hardcore modes and switch the dual-mode exhaust to the quieter of the two settings, and the M5 transforms into your typical 5 Series.

This is a remarkably good car in everyday driving, where the adaptive dampers and non-run-flat tires conspire to produce a supple ride on normal roads. We happily spent a hot summer's day running up and down Interstate 94 with the M5, and there wasn't a thing that could bother us. This chassis balancing act is made all the better thanks to the M5's high-speed stability. It's utterly unflappable at high speeds – we're desperate to get this car on the autobahn to see just how comfortable it is at BMW's claimed 190-mph top speed.

While BMW makes some questionable packaging decisions – it's ridiculous that Apple CarPlay costs $300 – we're thrilled by the M5's active safety setup. Blind-spot monitoring, lane departure warning, and adaptive headlights with automatic high beams are all standard, while a full suite of driver assistance features costs just $1,700. On a car that starts at $102,600, that's an easy box to tick.

Grab the $1,700 Driving Assistance Plus Package and into the fray comes full-speed adaptive cruise control, lane keeping assist with steering assistance, front cross-traffic alert, and an automatic emergency braking system that preconditions the brakes and steering for an emergency lane change.

The systems work beautifully together, aiding the M5's ability to devour highway miles without exhausting its driver.

Ah, yes. 600 horsepower does not a good fuel economy rating make. The 2018 BMW M5 returns an EPA-estimated 15 miles per gallon city, 21 mpg highway, and 17 mpg combined. In mixed driving (and despite a heavy right foot) we saw a computer-indicated figure of 17.5 mpg.

The M5 is roughly par for this class of super sedans. The Cadillac CTS-V is rated at a nearly identical 14 mpg city, 21 mpg highway, and 17 mpg combined, while the Mercedes-AMG E63S 4Matic ties the M5 in the city and adds one mile per gallon to the highway number. If you’re the odd sort that cares about fuel economy in a 600-hp sedan, you’ll want to grab the Audi RS7 Performance, which promises up to 24 mpg highway, while tying the M5 in the combined rating and coming in with 14 mpg in the city.