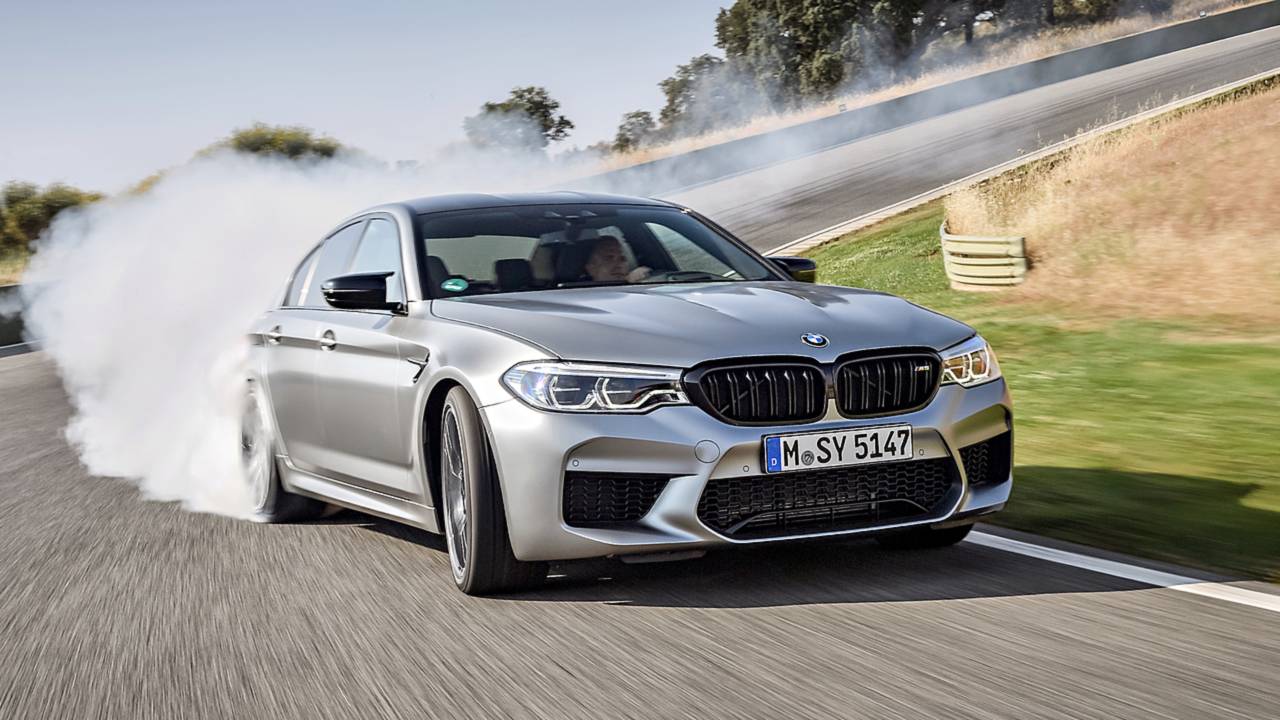 Is this the best big sport sedan around?

A stronger, faster, even more extreme version of the BMW M5. More power, that's exactly what this car has always needed, right? Let's recap: the "normal" M5 sends 600 horsepower to a smart all-wheel-drive system (which you can disable if you want to drift smoky circles around your fellow hedge fund managers) and can get to 60 in 3.4 seconds.

In our last test of it, we complained about the almost restrained, supercooled character of the car. Or to put it in a nutshell: while the power was there, the sound and steering didn’t make the hairs on the back of our neck stand up. The new M5 Competition starts here, but gets a little more uncompromising along the way. But are these improvements enough to elevate the BMW over its arch-rival, the Mercedes-AMG E63 S?

Well, the most striking innovation is certainly the performance increase for the 4.4-liter twin-turbo V8. Anyone who has ever had the pleasure of having their guts rearranged by this monster will wonder what need there is for extra power.

Outside of the powertrain, the M5 Competition has more or less the same improvements a greedy pack of car enthusiasts would make if they got their mitts on a poor M engineer. BMW installed stiffer engine mounts (for better response and more direct steering), lowered the ride height by .27 inches, tweaked the dampers, and upped the spring stiffness by ten percent. The rear axle gets a stiffer sway bar and solid toe-link mountings.

Most other changes are for cosmetics – new 20-inch wheels (in new guise) and all kinds of glossy black paint on the kidney grille, the mirror caps, and the rear skirt panel. There’s also a new exhaust system that’s ever so slightly angrier.

BMW sent me and the M5 Competition on a very curvy, very narrow, and sometimes very battered route around the southern Spanish Ronda. That this is not necessarily the preferred living room of a 600-plus-horsepower M5 should be clear – this road was better suited to a Lotus Elise. The fact that the big BMW still managed to get out of the affair so well speaks to the talent of the team behind it. Sure, the big M5 slaughters the little mountain roads rather than gracefully dancing through them, but it’s not uncomfortable handling them. Not one bit.

Without having driven the two – the normal M5 and the Competition – in a direct comparison, it’s not easy spotting the differences. The M5 has stunning footwork for its size, but it’s still huge

The steering is quick, binding corners together. The Competition is a little sharper in its body movements. Body control is outstanding even on very bad asphalt and at very high speeds. In Sport and Sport Plus modes it can get a bit rough on potholes, but that's not much of a surprise. The normal M5 was already on the punishing side – the Competition doesn’t make it any worse.

And on the racetrack?

Logically, the M5 is as good on the track as it is on the road. And while we don’t expect many M5 owners to be track rats, they should be, because even the base car is a sensation when driven on a circuit. Adding the Competition badge to the back only makes things better. But both cars are a bit confusing.

On the one hand, it’s hard to ignore the M5’s size – you’ll feel the two tons of Teutonic sedan through the turns. But on the other, the Competition – especially as soon as you get on it – seems to constantly say “Hey, actually I’m not that big and heavy. Just drive harder!”

Drive it enough and the M5 Competition starts to feel smaller, more communicative, and more engaging than the normal example. In 4WD mode and with the stability control in M Dynamic Mode – it loosens things up just a smidge and allows for satisfyingly light drifts at the limit. The M5 Competition is controllable, but wonderfully exciting, and above all, damn fast the whole time. Of course, you can also switch everything off, activate the rear-wheel drive mode, and annihilate the tires with nasty drifts. It doesn’t take a lot to provoke the M5 in this setting, thanks to its crazy power.

How is the engine?

The biturbo V8 continues to be a berserker, terribly powerful from the bottom to the top. It’s a physical, impressive kind of power. Low engine speed? Doesn’t matter. The 4.4-liter V8 always pushes, intensely and from a standstill. I do not know if my ears were thrown off by the thrust, but it seems as if the Competition sounds more motivated and bassier than its normal counterpart.

The eight-speed automatic transmission is still a joy. Yet another ZF 8AT, it remains one of the best on the market.

The even sportier M5 remains a solid choice, especially for customers who use their car not only for driving to work, but for full-throttle fun on the highway or track. The differences compared to the normal M5 are not so serious that this changes the character of the whole car, but the connoisseur will notice that the Competition is more direct and willing when driven hard.

At the same time, you don’t have to worry about any loss in everyday usability, since the M5 Competition’s performance improvement is sufficiently gentle.

And to answer the final question, when it comes to pure drama and theater, someone with the AMG E 63 S would probably have more fun. But all in all, the BMW M5 Competition is the best big sport sedan around.

Could be a little more extroverted