As a general rule, if Porsche offers a model with the “T” designation, it's the one you should get. Blending the base variant’s powertrain with performance goodies from higher up the food chain, a T model makes a strong value play that's unusual from a brand like Porsche. The 2020 718 Cayman T is a textbook example of the approach.

Slotting in between the standard Cayman and the Cayman S, the T is a driver's car first, with brilliant reflexes, limitless feedback, and uncommonly approachable dynamics for a mid-engine product. But recognizing those qualities is key to ignoring some of the Cayman T's drawbacks, which include an un-Porsche-like exhaust note and a sprint to 60 that qualifies as “relaxed.”

Still, as a means of scoring a mid-engine sports car that will delight you at every corner, the $66,000 718 Cayman T is a tempting proposition, especially when you consider how different its approach to performance is for a German vehicle – letting straight-line speed play second fiddle to agility and feedback.

A Delight To Drive

As is common with T models, the Cayman adopts a number of features not available on the base car. While Porsche Active Suspension Management is an option, the T adds a Sport version of PASM with an even lower ride height, which usually requires the S spec. The rear wheels are wider, too. It also adds standard equipment that would be optional on the base Cayman (a limited-slip diff, sport exhaust, and Sport Chrono package). Alongside a modest 300-horsepower flat-four engine, the Cayman T encourages its driver to bask in the act of driving, rather than in lap times, straight-line speed, or outright agility.

It involves you in the experience, from turning the wheel and stabbing the brake pedal to snapping off an upshift from the six-speed manual. You feel the different parts working around you in a way that's distinctly old-school. It feels like there are fewer layers between you and the mechanical bits of the car, so every time the suspension reacts to the road or the flat-four engine sings its raspy song, you feel like you’re playing a role in the act of moving the Cayman down the road. This is the sort of analog driving experience that few new cars offer.

Of course, the T adopts a few aesthetic touches to stand out from the pack. Its standard 20-inch Carrera S wheels, borrowed from the 911, wear a Titanium Gray finish that's unavailable on the broader Cayman range. That shade reappears on the mirror caps. There are Cayman T door decals, too. And in the cabin, Porsche's kitschy nylon door pulls make an appearance, complemented by exclusive upholstery that puts Sport-Tex trim at the seat centers.

Although this example wore the no-cost black, owners can coordinate the color of the door pulls with the stitching on the seats and dash – Guards Red, GT Silver, Racing Yellow, and Lizard Green are available – giving the interior a sporty character. These are all small things, but they make the T feel just a bit more special than a normal Cayman or Cayman S. 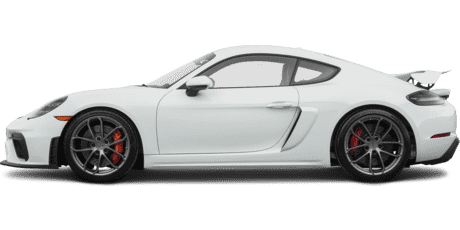 I'm not getting on the flat-four hater's wagon, because I do believe that this is a good little engine. There's ample torque and an eagerness to rev that make this a fun partner on a twisty road. But man, even the T's standard sport exhaust can't help the 2.0-liter's occasionally harsh and unpleasant singing voice.

While Porsche would never admit it, I'm convinced the reason we have flat-sixes in the GT4/Spider/GTS 4.0 is because people just don't like how the standard four-cylinder sounds. The 2.0-liter feels like a Porsche engine, but it rarely sounds like one (of course, that doesn't change the fact that it helped make a business case for the Cayman line).

Won't Appeal To Everyone

Expanding on that engine, the 300-horsepower mill and its 280 pound-feet of torque are enough to get the manual-trans model to 60 in 4.9 seconds. The PDK is quicker, at 4.6 seconds, but both times qualify as “leisurely” in a world where 3.5 seconds to 60 is the new 4.5. Now, I think the improved handling from the standard PASM Sport suspension and wider rubber, along with the savings relative to the Cayman S, make up for that shortcoming.

But going with the Cayman T means you prioritize something other than straight-line speed and understanding that fact will be key to a happy ownership experience. If you care more about blasting away from stoplights in a cloud of tire smoke, the 350-hp Cayman S – zero to 60 in 4.0 seconds when properly equipped – will be more your speed.

On the one hand, we should be thankful the US-market Cayman T comes with a radio and touchscreen at all – it’s an option across the pond. On the other, maybe we’d be better off without the last-gen system that occupies the 718’s center stack. Cursed with dull graphics and an overly complex layout, simple tasks like changing the radio station take multiple inputs.

In the car’s defense, it’s the second oldest product in the Porsche family, having made its debut at the 2016 Geneva Motor Show. A facelift is due any day now, and as with the Macan, we expect the smallish, annoying display to move to more modern hardware/software as part of its refresh.

Correction: A previous version of this review listed the Cayman T's engine as 2.5-liter flat-four and indicated it didn't feature Apple CarPlay. That is not the case. The engine displaces 2.0 liters and Apple CarPlay is standard. We regret the error.