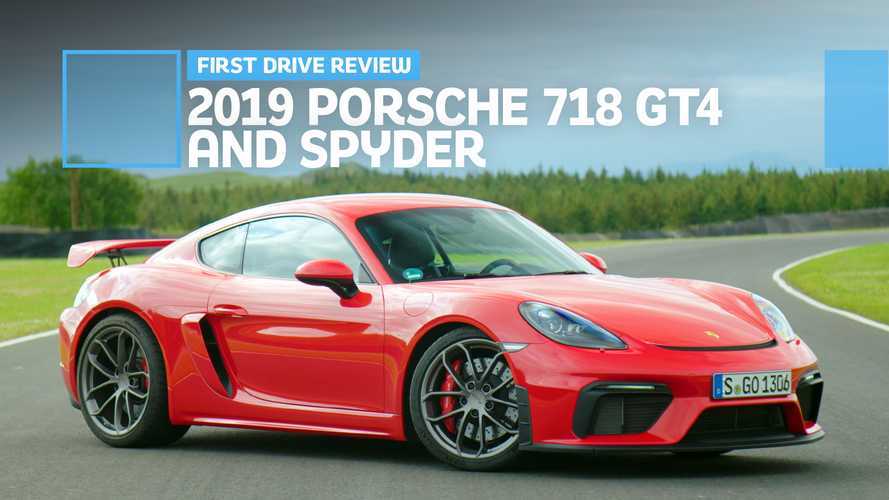 The Porsche Cayman GT4 and 718 Spyder are probably the greatest gifts Porsche could give the true enthusiast. If you still know what a naturally aspirated engine is, or what to do with three pedals and thing in the middle (um, a manual gearbox). If you appreciate the sound of 8,000 RPM screaming behind your own back, then it's perfectly alright if your saliva is dripping out of the corners of your mouth. Rejoice, dear purists. The Cayman GT4 and Boxster Spyder are back.

When the first Cayman GT4 launched in 2015, it was an absolute surprise hit; a 385 horsepower six-cylinder engine, a manual six-speed gearbox, a 911 GT3 chassis (minus the frills), and a relatively affordable asking price. As the 911 gets heavier, wider, and more complex, there are people who want to reduce it to the essentials, a reflection on the good old virtues. Of course you can take it easy, throw an instant meal in the microwave and maybe it'll come out halfway decent – or you can go to the market, buy fresh stuff, fry your steak on real fire and stir your sauce yourself. You'll have to work a little harder, but it tastes much better and makes you much happier. That's the GT4.

In the end, Porsche was completely overwhelmed by demand of the original. Countless prospective customers looked into the tube. But now they all get a second chance. And that – to keep the analogy going – has the potential to taste even better. Now because more people will get a shot at one of the two; production is no longer strictly limited, and construction will continue until 2021.

The Porsche Cayman GT4 and 718 Spyder are probably the greatest gifts Porsche could give the true enthusiast.

Jesus, a lot. Every time Porsche GT boss Andreas Preuninger and his disciples start something new, there seems to be no journey too far nor no effort too great to ultimately achieve the best possible result. First off, there's the engine. Previously, the 718 Cayman and Boxster had only four-cylinder turbos. Fast and efficient, but nothing you'd tell your grandchildren about.

Now there's a new 4.0-liter six-cylinder boxer engine with no turbos. This is not the 911 GT3, Speedster, etc. engine, strangely. That elaborate masterpiece wouldn't have fit into the small 718 – and it would have been too expensive for a car that starts at less than $100,000. Instead a brand-new engine is planted behind your buttocks. It's a derivative of the 9A2Evo twin-turbo 3.0-liter from the 992. A stiffer forged steel crankshaft, a plastic oil pan (36.5 percent lighter than the old cast part), and hydraulic valves, among other things, ensure the right motorsport mojo. In addition there is start-stop functionality and a cylinder switch-off.

Both cars (yes, even the Spyder) have the front axle from the 911 GT3. At the rear, there's a reinforced lightweight axle; due to the different engine position of the 718, you can't simply borrow GT3 parts here. The front and rear dampers, the wishbones and trailing arms, the chassis mounts and the stiffer uniball bearings are all from the GT3. The PASM chassis is adaptive, and if you have a jack and a little time, you can do a great job tuning it. Stabilizers and spring-damper units are adjustable, just like the aerodynamics. Remove a few plastic parts from the front diffuser channels, then turn the rear wing down three degrees to compensate, and you'll have more downforce.

Apropos downforce: there's much more of it now. The new rear wing of the GT4 may not look as different as before, but it delivers 20 percent more downforce. The new rear diffuser, as the end piece of a fully clad underbody, increases downforce by 30 percent. In order for it to unleash its full potential, Porsche placed the exhaust system around it. A whopping 50 percent more rear contact pressure requires corresponding compensation on the front end.

The solution: a more massive spoiler sword and a so-called Gurney flap below the bonnet, which creates a kind of suction effect from the incoming air. At top speed, the GT4 generates 268 pounds of downforce. All this happens without any negative influence on the drag coefficient. The Spyder, naturally, has to do without the fat wing on the trunk lid. But the rest of the aero package is the same. Compared to a 718 Boxster GTS, lift is reduced by 50 percent. This is the first Boxster that actually creates downforce at the rear.

As before, GT4 and Spyder are 1.2 inches lower, have fat GT3 style 20 inches with 245 and 295 Michelin Cup2 tires, 15-inch brakes, thicker aprons, and in the case of the Cayman, a glorious wing on its chic aluminum feet. In addition, there's an Alcantara interior with 14-inch steering wheel and, on request for the Cayman (in Europe only), a Clubsport package complete with a roll bar, six-point seat belt, and fire extinguisher. These are serious track toys and, of course, once again attractive.

Where there's so much light, there's little shadow. The GT4 now weighs 3,199 pounds in the U.S, which makes it a bit heavier than the previous model. Porsche doesn't really say why it's heavier; some additional engine heft and little from the diffusor, probably – plus a heavier starter. But that doesn't hurt its Nordschleife time. Its 7:28-minute lap are on the books. That's 12 seconds faster than its predecessor, and four seconds faster than a now 15-year-old supercar called Carrera GT. Good lord.

How Do They Drive?

If you don't mind, I'd like to start with the Cayman GT4. We're on the Knockhill Raceway, Scotland's most famous racetrack. It's not very long at 1.2, but it's a sneaky beast. With all sorts of compressions and blind hilltops just waiting to kill materials, or even, whole cars. It's a track not made for bad chassis' – or stomachs.

Once plumped deep into the glorious carbon bucket seats (approximately $4,500, which one should definitely invest), an angry scream of resentment from the four liter opens its eyes. Phew, thank God – it's throaty, bass-streamy, and loud. In spite of two particulate filters, Porsche inserted the correct soundtrack here.

Out on the track and after two or three inputs, it becomes clear that this is a car honed for the circuit. The old GT4 felt rougher and more mechanical. The new one feels a bit softer and lighter in your hands. That's doesn't necessarily mean less charismatic, only that it's less stressful in handling. The clutch is lighter, the shortened gearshift lever slides through the channels even more effortlessly. Turn in, direction changes – it's even more agile with this smooth-running, positive, ultra-precise, and emotionally bursting steering.

Out on the track and after two or three inputs, it becomes clear that this is a car honed for the circuit.

On the road, this car feels taut, really taut. And at a rather leisurely pace. Here, however, it flies over hilltops, dives into depressions, bangs over curbs, and eats up treacherous undulations as if it were nothing. The damping is incredibly composed. It's impressive how this car controls its movements, even in extreme conditions. The balance with which it carries through the entire bend - it’ll be damn hard to find anything better at the moment.

The GT4 is always full of information. It communicates extensively; you always know exactly when it intends to stop gripping in the front, and exactly when it wants to start sliding in the back. You can drive it accurately and cleanly. Down shifts are easy with two fingers. Brake. Only if you hit the brakes really hard, it wiggles its tail a bit. Now turn in. Yep, it’s really that quick. Back on the gas, enjoy how the GT4 loads up, builds up more and more lateral forces, and digs itself out of the curve with an impressive amount of grip again. But you can also let it fly through easily if you want. A bit faster, a bit less clean into the bend, those easy slides – balanced, harmonious, wonderful.

Feels Good Driving A Six-Cylinder In A 718, Right?

Oh, yeah. This machine is a real beauty. Responsiveness, high revs, and tons of sound - still the three things that make you grin the most. And it is so finely tuned that it always gives you exactly what you want when you want it.

And before you ask: yes, the GT4 still has too long gearing. On country roads it doesn't matter much, because the new engine really has more punch. On the race track, though, it can sometimes get a bit problematic. Between second, third, and fourth gear there are often situations where you don't know exactly which is the better option. Then you tend to stay in third gear. It's a shame when you consider how sensational the gearbox is otherwise. It also has a new rev-match button for the intermediate throttle when downshifting. So, it's no longer tied to sports mode exclusively, which means you can always decide for yourself if you want to throw in your heel and toe skills or not.

The absolute playfulness, and the urge to go all the way up to that 8,000 rpm redline, are once again a bright spot with this new four-liter. Still, compared to the completely unleashed, brain-freezing speed of the 911 GT3 engine – a monster of an engine that revs up to 9,000 rpm – the new GT4 engine isn't quite there.

Does The 718 Spyder Feel Any different?

Now that it has the exact same engine, the exact same chassis, and a lot of the same aerodynamics, you have to be very meticulous to detect any differences. Especially because I only moved the Spyder on the country road. If you like a lot of fresh air, don't mind a bit of hood fiddling, and hate big rear wings, buy the open-top version.

Should I Consider These Cars?

The Boxster Spyder certainly benefits the most because there are now virtually no differences to the GT4. Sure, it costs at least $97,650, but there's nothing in the class, for the money that even comes close. The ability to combine such a wonderful chassis with a great naturally aspirated engine, and so much hairstyle destruction potential, is awe-inspiring. Apart from that, it's really not too much torture to drive every day.

The same applies to the 718 Cayman GT4, which costs $100,550. It's probably become a bit more gentle and more accessible, but hasn't lost any of its character and handling. Of course, it doesn't come close to the ultimate kick, a 911 GT3. Nevertheless, the new GT4 delivers better chassis and engine performance than ever before. It's an incredibly entertaining device, brilliant down to the last screw. Certainly the best sports car you can buy in this segment.