The automotive equivalent of the color beige gets a spicy and sporty injection of personality.

We enthusiast types don’t typically love writing about the Toyota Camry. Even after migrating to the TNGA platform for the 2018 model year, it still remained a fairly uninteresting sedan to drive. Sure, that stiff modular chassis now gives the Camry some semblance of handling verve, but for pure midsize driving enjoyment, our basement-dwelling drivel usually sings the Mazda6’s praises, particularly in its newly turbocharged Grand Touring trim.

Toyota, evidently, is no longer content to get a patronizing, “most improved” pat on the head from die-hard driving devotees, and it’s thrown a whole lot of aggression at its popular midsize sedan. Enter the first-ever 2020 Camry TRD, which gets a standard V6, trim-specific suspension tuning, larger brakes, and a conspicuous aero kit. Unusually for a performance-oriented model, the TRD is also the cheapest way to get into a six-cylinder Camry, with a base price of $31,170. And you know what? The TRD is silly, overwrought, and unnecessarily aggressive, but we can’t help but like it.

The base Toyota Camry gets a wing-shaped schnoz and narrow headlights with some upmarket style that wouldn’t look out of place on a Lexus. On the TRD, however, the designers threw any semblance of grace out the window in the name of harsh and unyielding sportiness, styling-wise at least.

Borrowed from the Camry SE and XSE, a blacked-out, X-shaped front end graphic separates the hood and headlights from the bumper, and the lower air intake looks more authentic than before (although the core bumper support still closes off some of the grille openings). The lower side “air intakes” are likewise blocked off, but they still look appropriately sporty. Unique to the TRD is a surprisingly aggressive front splitter.

Painted gloss black with red pinstriping, the front splitter, side skirts, and rear bumper diffuser collaborate to give the exuberant Camry some added visual flash. That new rear bumper also houses twin exhaust outlets that could double as rocket-propelled grenade launchers. And the biplane-style wing on the decklid isn’t just unusual for a Camry, it’s surprising to see on any vehicle short of a Chevy Camaro ZL1.

Two-tone paint is a mandatory $500 option with Supersonic Red or Celestial Silver and a $950 option on Wind Chill Pearl – our tester featured the mach-plus shade, and it looks great contrasted with the Midnight Black Metallic roof and spoiler.

Inside, the TRD gets extensive contrasting accents, including red stitching and embroidery on the black Softex seat faces, red and black cloth seating inserts, red carpet bands on the TRD-embroidered floor mats, and red stitching on the dashboard. And then there are those blazing red seat belts. Together with the aluminum pedals, the interior wastes no time informing drivers that this Camry is here to party.

Like other Toyota sedans, this Camry is a mostly comfortable place to spend time. But in its transition from mild-mannered midsizer to superhero imitator, the TRD has picked up a few bad habits. The aero aids, for example, generate a rather uncomfortable whistling sound when driving down the highway with anything more than a mild crosswind. Adding more audial discomfort is the TRD-specific cat-back exhaust system – at full chat, the pipes sing a lovely song, but there’s a lot of uncomfortable boominess that penetrates the cabin when cruising under light engine load.

However, we must give snaps to TRD engineers for tuning the sedan’s custom dampers for performance without ruining ride comfort. Even on 19-inch wheels with rubber-band tire sidewalls, the Camry offers a firm, planted ride that still absorbs bumps rather well. Partial credit goes to TRD-specific underbody bracing for the TNGA-platform sedan. Offering a palpable increase in body rigidity relative to the still-impressive Camry, the stiffer chassis means the suspension can work effectively across a broader set of uses.

The Camry TRD can blame its impressive $31,170 starting price on a relative lack of interior features, unfortunately. The 7.0-inch infotainment display in the center stack is the same as one would find in a base Camry L and smaller than the 8.0-inch touchscreen found in the similarly priced Accord Sport or the 10.3-inch unit found in the Kia K5 GT. And while the TRD’s 4.2-inch info display in the gauge cluster – bookended by analog gauges – would have been adequate five years ago, it looks outdated today.

Ditto the Camry’s infotainment system graphics. The interface is reasonably easy to use, though saddled with visuals that haven’t been updated since Toyotas of the last decade. Apple CarPlay and Android Auto come standard on the TRD (as on all Camrys), which is a good thing since the performance-tuned sedan doesn’t offer embedded navigation. Also notably absent is an upgraded audio system. The base sound package isn’t terrible, but it doesn’t stand up against the JBL system on other Camry trims.

And while other cars in its class (and in the Camry family) get sophisticated 360-degree cameras and parking sensors with reverse auto-brake to prevent low-speed crashes, the Camry TRD receives a rear camera only. What’s more, the display’s grid lines are fixed, so drivers can’t even predict their trajectory when reversing with the wheel turned.

We can’t decide if the Camry TRD’s impressive performance is predictable or surprising – the former because of its shouty body modifications and bold 19-inch alloy wheels or the latter because, well, it’s a Camry. But whatever the case may be, the sport-tuned midsize sedan serves up a heaping helping of control and power belying its humble family-car bones.

Those big wheels come wrapped in all-season tires that offer impressive grip for four-season rubber. But it’s easy to slap some huge meats on a car and call it traction. What’s far more difficult is giving that same car finesse. That’s where the specially tuned dampers and lowering springs come into play. Riding 0.6-inch lower than the Camry XSE, the TRD offers genuinely impressive balance through high-speed sweepers and freeway onramps, with the tires coming into play to provide grip in tighter turns.

Accompanied by a satisfying growl from the Camry’s 3.5-liter V6 – making 301 best-in-class horsepower and 267 pound-feet – the TRD attacks corners with more ferocity than could be reasonably expected of this or any other midsize, front-drive sedan. However, Toyota limits all-wheel drive to the Camry’s standard 2.5-liter inline-four (owing to the V6’s absurdly low 6-percent take rate), and that’s about the only reasonable way we could think to improve the TRD – short of offering a SEMA-chic turbocharger kit or manual transmission or something.

The standard eight-speed automatic transmission seems more responsive than in other trim levels, though that could be due to our perpetual use of its sport mode and paddle shifters. The rare moments we used the car’s Eco throttle and transmission tuning elicited neutered responses and frustratingly early upshifts; the payoff is noticeably better fuel economy in normal commuting. 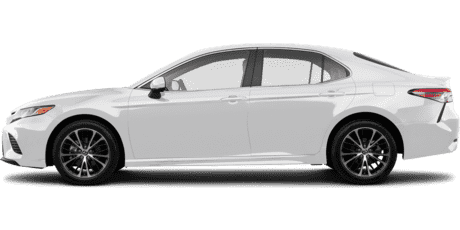 While nearly every midsize family sedan on the market offers lots of active safety, the Camry gets credit for being among the first to democratize features like automatic emergency braking, adaptive cruise control, lane-departure prevention, and pedestrian detection. Those features come bundled in Toyota Safety Sense-P, which is standard on every Camry trim. Unfortunately, the TRD isn’t available with blind spot monitoring, a feature that comes standard on the Accord Sport 2.0T and K5 GT. Blame some aggressive decontenting that, again, results in a commendable base price.

The 2020 Toyota Camry TRD achieves 22 miles per gallon city, 31 highway, and 25 combined. That’s not terrible for a V6 in a class full of four-cylinder turbos – the less powerful Accord 2.0T achieves 22 city, 32 highway, and 26 combined, while the Mazda6 Grand Touring’s 2.5-liter turbocharged engine offers 23 city, 31 highway, and 26 combined. The EPA hasn’t evaluated the Kia K5 GT yet. The TRD pales in comparison to the far less powerful Kia K5 GT-Line (27 city, 37 highway, 31 combined), but that 180-hp vehicle can’t keep up with the Camry’s husky V6.

The 2020 Toyota Camry TRD starts at $31,170, and the only cost option is paint color. Our tester came with no-cost all-season tires (summer tires are available), $500 worth of Supersonic Red two-tone bodywork, and a $995 destination charge, totaling $33,165 all-in. The only way to pay more for a TRD is to opt for Wind Chill Pearl two-tone paint, which costs another $450, or to load it down with dealer-installed accessories.

At a shade over 33 large, the Camry TRD is a bargain, particularly for customers who value big styling over big infotainment screens. And we admire Toyota for pricing its performance-tuned sedan in the middle of the Camry pack instead of the top. While your author might rather have a not-long-for-this-world Accord Sport with a six-speed manual transmission, there’s still a big market for this jellybean-badged boy racer. In adding plenty of visual, aural, and guttural personality – without losing essential family-hauling qualities – the Toyota Camry TRD proves that midsize sedans can still come in flavors aside from vanilla.