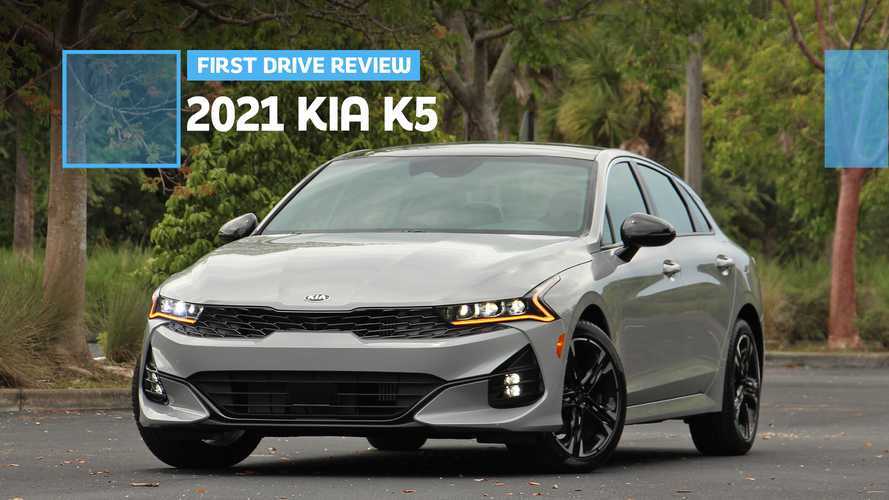 The Kia K5 is a sharp new entrant in the mid-size game.

Pour one out for the Kia Optima. After 20 years on sale in the US, the company has decided to make a change – and that change comes in the form of the 2021 Kia K5. Even though the Kia mid-sizer loses the nameplate that made it somewhat of a success over the past two decades, the K5 keeps the core values of the last Optima intact – things like good equipment, a comfortable ride, and loads of safety features carry over. But now the sedan dials up the style even further.

The Kia K5 is a very handsome vehicle. With eye-catching new elements like sharp LED "Heart Beat" amber running lights, a slim "Tiger Nose" grille, and a full-width light bar in the rear, we’d say the K5 is actually be the new best-looking car in the class (sorry, Mazda6).

Kia dropped off two trim levels for us to test, the GT-Line and the EX, with the latter sporting a basic (but still beautiful) blue paint job and 18-inch wheels. But the GT-Line looks even better with sporty cues like a shark skin-inspired grille mesh, trim-specific 18-inch wheels, and aggressively styled exhaust tips. The K5 GT-Line also gets a Wolf Gray paint job that Kia may or may not have ripped from Porsche, but it looks great nonetheless.

The GT-Line has a pretty nice interior, too. It's the only trim that comes standard with red, faux leather seats, a flat-bottomed, leather-stitched steering wheel, and a nice shifter with aluminum fixtures. But while the EX model is more basic visually, with standard black leatherette, it does offer more high-quality materials. There's soft black plastic on the door panels, aluminum and wood trim on the dash, and piano black plastic around the touchscreen and instrument cluster that feels better than some of the flimsier plastics found in the GT-Line.

But you really can't go wrong with either. The Kia K5 has a clean, spacious cabin layout that's comfortable for both front and rear passengers. And even though neither one offers real leather, Kia's sublime leatherette feels as close to cowhide as anything we've tested.

The Kia K5 has two available touchscreens: a standard 8.0-inch unit and an optional 10.3-inch screen. The GT-Line we tested gets the smaller, standard 8.0-inch screen, which sports the old Kia UVO infotainment system for some reason. Compared to other modern infotainment systems, this one already looks dated. But at least touch responsiveness is decent and it's generally all very easy to use. Plus wireless Apple CarPlay and Android Auto come standard, and here it works flawlessly, connecting instantly once you hop inside.

The packaging on this car is odd, though. The bigger 10.3-inch screen in the EX model (standard here but optional on GT-Line and above) gets Kia's new UVO infotainment system, but not wireless CarPlay or Android Auto. You still have to plug in. At least the bigger screen looks better than the old one, and has a clean and modern layout, crystal clear graphics (finished in a retro-tastic neon pink and purple color), and Nixie tube channel indicators. The latter is a fun touch that carries over from the Hyundai Sonata. That said, we'd still take a channel tuning knob over wacky graphics any day, which the larger screen on the EX lacks.

The bigger 10.3-inch screen in the EX model gets Kia's new UVO infotainment system, but not wireless CarPlay or Android Auto.

Nice To Drive, But Not Sporty

The Kia K5 is definitely not a sports sedan – even the GT-Line barely meets our mark of "sporty." You'll have to wait for the full-fledged K5 GT with 290 horsepower and all-wheel drive if you want something like a mini-Stinger. That said, the K5's standard turbocharged 1.6-liter engine pumps out a pretty decent 180 horses and 195 pound-feet. And that's just enough power to propel the Kia with some quickness, the sedan squealing its optional Pirelli rubber off the line. Unfortunately, the new eight-speed automatic doesn't feel totally up to the task, especially at higher speeds; it's laggy, whiny, and hangs revs for way too long.

The K5 corners well enough for the class – it's flatter and smoother than some rivals like the Subaru Legacy and Nissan Altima – but steering is a bit overboosted for drivers wanting a more dynamic experience, and it does understeer hard. And while the Kia's suspension finds a nice middle-ground between too soft and back-breaking, which makes for a really refined ride, it lacks feedback.

That said, there's nothing overtly offensive about the way the K5 drives – let's face it, most buyers won't be taking their front-wheel-drive Kia to the track anyway. The K5 is quiet, capable, and refined on the road, rivaling the best in the segment in comfort and likability. Even more appealing to prospective buyers is the fact that the K5 is a very safe option, with a large selection of available equipment.

Every Kia K5 comes standard with front automatic emergency braking, lane-keep assist, and automatic high-beam headlights. And all except the base K5 LX get standard blind-spot warning with collision avoidance and rear cross-traffic alert. As for our two testers, both the GT-Line and EX have the optional adaptive cruise control with lane-tracing, and they both work exceptionally well. But only the GT-Line’s adaptive cruise control gets stop-and-go functionality, for some reason – it’s another odd aspect of the K5’s overall packaging.

At $23,490 to start, the Kia K5 is priced well. And even though our GT-Line tester with the $1,600 Premium package costs about $27,000, and our EX model with the $3,400 Premium package costs just north of $34,000, neither of them feels overpriced. But more importantly, the K5 is easily the best looking, non-luxury sedan you can buy right now — it’s more buttoned-up than the Sonata and a slight notch more appealing than the Mazda6.

The K5 is easily the best looking, non-luxury sedan you can buy right now.

But those gorgeous good looks maybe set too high expectations (in our mind) that the rest of the car doesn’t totally match. We were hoping for something sportier, but instead, the K5 is a middle-of-the-road sedan that drives well, has a nice cabin, and offers as much safety equipment as the segment leaders. The K5 is pretty much just Optima with a new name and better style. Though, we do give it big brownie points for things like wireless CarPlay and the funky Qi wireless charger. It’s a good car, we just wish it were more stimulating – hopefully Kia reserved the really good stuff for the K5 GT.