Stronger, better… but not faster.

The Toyota Avalon isn't the car it once was. It's better, actually. Pretty much every version of the current model sheds the once-synonymous retiree stigma of yore for more grown-up characteristics. The current Avalon is relaxed and poised, with an abundance of modern technology to boot. But no version offers the same capability and comfort, now with an extra dose of fun, as well as the new sporty Toyota Avalon TRD. 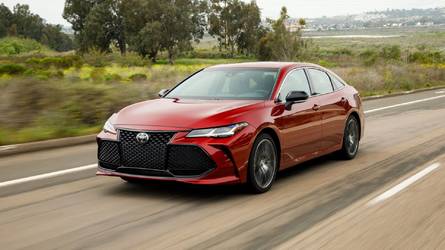 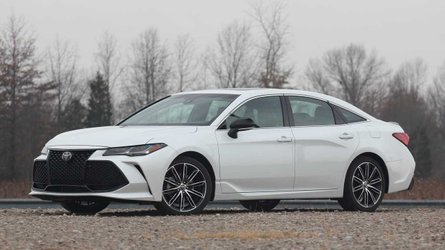 Along with the Camry TRD, the Avalon TRD is one of the odder offerings in the performance arm’s near 40-year-lineage in the U.S. But much like the trucks and SUVs with which it shares its nameplate, the Avalon TRD isn’t short on equipment.

The Avalon TRD actually looks sort of badass. That’s something we never thought we’d say of Toyota’s historically ordinary full-size sedan. The 19-inch TRD wheels (same as the Camry TRD), red pinstriping, and black spoiler toughen up the exterior in line with the hidden performance upgrades beneath the skin. Some of the same badassery carries over to the cabin, features like red stitching, red-and-black sport seats, and, yes, red seat belts. The entire look is ambitious for an Avalon, but it works.

Though, much like the Avalon Touring on which it’s based, the TRD’s massive grille takes up a ton of real estate on the front fascia. It draws attention away from the sporty sedan’s otherwise attractive styling elements, most notably the lovely trunk-length light bar and TRD-specific dual exhaust tips – and only around 20-percent of it actually lets in air. The gaping grille, however, is only a slight blemish to the TRD Avalon’s otherwise interesting exterior.

Toyota set the bar high for the Avalon TRD out of the gate. Engineers list the Kia Stinger and Audi A6 as its main competitors – two very good sedans. While we applaud Toyota’s confidence (though, comparing a front-drive sedan to two rear-wheel-drive alternatives is maybe too ambitious), the Avalon TRD has many redeemable qualities on-road that makes it competitive, even if it ultimately can’t hold a candle to the Stinger’s performance or German A6’s refinement and poise.

Chassis reinforcements and suspension upgrades do help. With the Avalon TRD’s stiffer spring rates (10 percent in the front, 50 percent out back relative to the Touring) and larger underbody bracing, the car feels noticeably more rigid from the driver’s seat. The Avalon TRD corners flatly and on a twisty autocross course set up on the grounds of Texas Motor Speedway. At least, more so than any other Avalon before it.

The TRD model sheds the Touring trim’s adaptive suspension in place of sportier tuning out of the box, and it’s much better.

Cornering improves, too. By a good margin, in fact. Active Cornering Assist, which brakes the inner wheel, and a half-inch lower ride height help the Avalon TRD handle tight turns with some semblance of alertness. The TRD model sheds the Touring trim’s adaptive suspension in place of sportier tuning out of the box, and it’s much better.

But the Avalon TRD isn’t a thoroughbred sports sedan as its sporty exterior and stiffening might denote. There’s still noticeable body roll (due in part to its 3,700-pound curb weight), the same soft steering feel, sluggish throttle input, and not-exceptionally grippy all-season tires (P235/40) from the Touring trim. While TRD engineers went all out in suspension upgrades, for which we are thankful, two or three more tweaks and this would be a different vehicle entirely. But frankly, autocrossing isn’t the Avalon’s forte. The TRD model excels where all other Avalons before it have: On the road.

The Avalon TRD isn’t a track toy, but it is perfect for the speedy, straight highways of Texas where we’re testing it. The Avalon TRD is composed at highway speeds and quiet and comfortable inside. The 301 horsepower of the standard 3.5-liter V6 is enough, providing the Avalon TRD good off-the-line speed and plenty of punch at the top of the rev range. Suspension upgrades make the ride noticeably firmer, which will probably deter the Avalon’s traditional buyer base, but the additional stiffness improves connectedness at speed without being too intrusive for daily driving.

The only thing hampering the Avalon TRD is its sloppy eight-speed automatic. This transmission is over-ambitious, upshifting too early and straight-up preventing full manual mode, even in the most aggressive setting. And we (like many customers) would prefer an all-wheel-drive option; the Avalon TRD would fair better with power at both ends.

But at $42,300 to start, the Toyota Avalon TRD actually undercuts the Avalon Touring on which it’s based. Compared to its closest rival, the Kia Stinger GT ($39,300), it is more expensive. But that shouldn’t have you writing off this car entirely.

Sure, this Avalon isn’t great at autocrossing or hard cornering – we suggest the Camry TRD instead if you want an agile four-door with a Toyota badge. But the TRD model is a sporty-enough sedan that excels in straight-line speed and comfort, with enough dexterity for the average consumer.