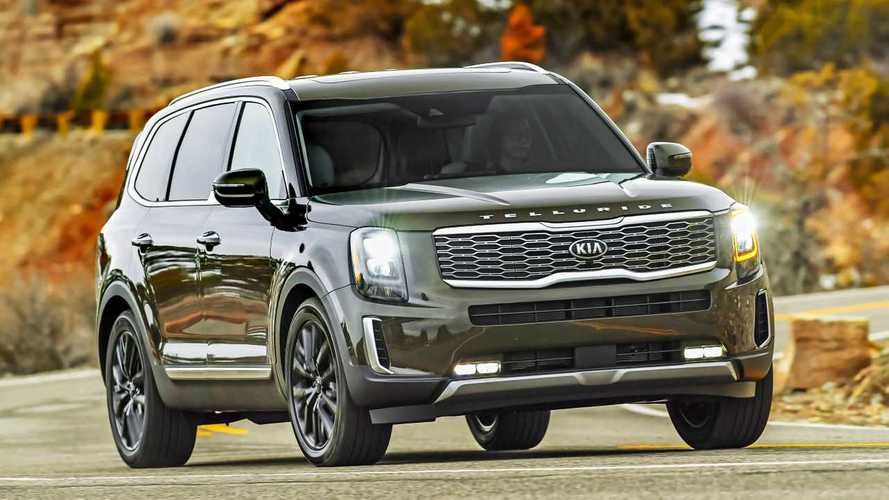 We get Kia’s biggest crossover dirty in Colorado.

The 2020 Kia Telluride is the South Korean brand’s largest crossover SUV to date, overshadowing the mid-size Sorento in length by a substantial 7.9 inches and the short-lived Borrego by 4.6 inches. Size, however, is relative, and the Telluride feels like an ant on a molehill next to the towering canyon walls and snow-covered mountains that loom alongside western Colorado’s scenic highways.

In spite of its boxy, SUV-like styling, the Telluride is built on unibody bones, which means it’s technically a crossover. Underhood sits a 3.8-liter V6 engine that pushes 291 horsepower to the front wheels, although all-wheel-drive is a $2,000 option across the line. Due to a healthy dose of body roll and well-weighted-but-muted steering, the Telluride lacks the driving engagement of other full-size crossovers such as the Mazda CX-9. Still, the Kia wafts through corners with surprising composure courtesy of its well-damped suspension and rigid structure.

Drive the Telluride like the people-mover it is, and Kia’s big box quickly finds its stride. Thanks to its comfortable ride quality, thick window glass, and surplus of sound-deadening materials, the top-of-the-line Telluride SX ($41,490) offers a stoicism often associated with premium marques. It’s likely the thicker sidewalls of the base LX ($31,690) and upper-mid-level EX ($37,090) trims’ 18-inch wheel-and-tire setup further improves the Telluride’s ride quality. The lower-mid-level S ($33,990) and high-end SX trims both ride on 20-inch wheels and tires.

Kia mates an eight-speed automatic transmission to the naturally aspirated six-cylinder engine. It’s a gem of a gearbox that reliably serves up quick and crisp shifts. Although it is prone to hunting for gears, its smooth operation, as well as the limited engine noise that enters the cockpit, makes this an admissible enough trait.

Still, a little extra low-end grunt from the engine might put some of this behavior to rest. As is, the V6 engine produces all 262 pound-feet of its torque at 5,200 rpm, while power peaks at an even higher 6,000 rpm. Western Colorado’s high altitude is a possible culprit for the transmission’s overzealous shifting, as the elevated land’s lower oxygen levels surely constrain the engine’s ability to produce full power. Kia ought to consider adding a more altitude-friendly turbocharged engine option to the Telluride model line, be it a frugal four-cylinder or the powerful twin-turbocharged 3.3-liter V6 from the Stinger GT. We’re eager to try the Telluride at lower elevations to see how the 3.8-liter fares in more oxygenated air.

Nevertheless, switching the drive mode selector to Sport from Comfort or Eco settles the constant cog swapping down somewhat as the transmission is more reluctant to upshift and tends to avoid top gear in this setting. There’s also a Smart mode, which automatically – and expertly – switches between Sport, Comfort, and Eco modes.

Along with its changes to the transmission’s mapping, Sport mode also alters throttle response, adds extra heft to the steering, and adjusts the all-wheel-drive system’s power split. Whereas all-wheel-drive Tellurides default to sending all of the engine’s power to the front wheels in Eco and Smart mode, and 80 percent of power to the front axle in Comfort and Snow mode, Sport mode dispatches 65 percent of power forward and 35 percent rearward. For additional help, the Telluride also features a Lock mode that splits power evenly between the front and rear axles at speeds of less than 40 miles per hour.

All-wheel-drive Tellurides default to sending all of the engine's power to the front wheels.

The Telluride’s all-wheel-drive system proves its mettle on the dirt trails off Colorado’s Highway 141, as power flows seamlessly between the front and rear axles as the all-season Michelin Primacy Tour tires claw for grip among the dust and dirt. Equally as impressive is the rigidity of the chassis, and the interior emits not a single squeak or rattle while driving about the pockmarked path.

Opting for all-wheel-drive lowers the Telluride’s EPA-rated fuel economy from 20 miles per gallon city, 26 mpg highway, and 23 mpg combined to 19 mpg city, 24 mpg highway, and 21 mpg combined. Regardless of drivetrain, every Telluride is capable of towing up to 5,000 pounds. EX and SX models, though, are available with a $795 towing package that adds a load-leveling rear suspension and tow hitch.

Strangely, the Telluride is unavailable with a number of common features that competitors offer, including a rear-seat entertainment system and automatic parking assist. Kia also limits the $2,000 SX Prestige package to the all-wheel-drive Telluride SX, which is this crossover’s most expensive configuration of trim and drivetrain. The package adds equipment such as heated and cooled second-row bucket seats, a 110-volt plug, automatic windshield wipers, a head-up display, and richer leather and headliner trim.

What the Telluride flubs in optional extras it makes up for with its standard features list.

While LX and EX trims feature seating for eight courtesy of a three-across second-row bench, S and SX models lower that figure to seven thanks to standard second-row bucket seats (the bench, however, is a $100 option on the S). The second-row buckets are appropriately cushy and offer adequate support, headroom, and legroom. Alas, the three-across rear bench is a less inviting place to sit. As in other full-size crossovers, the rearmost row’s seat bottom is mounted too low for long-haul comfort. Additionally, the center seating position is all-but useless for a full-size adult with the outboard seats in use.

Meanwhile, the SX offers exclusive kit such as a 360-degree camera system, a 7.0-inch instrument cluster display – all other models use a 3.5-inch display – that shows the feed from the left or right mirror-mounted cameras at the touch of the turn signal stalk, and a 10-way power driver’s seat with memory settings.

My only real complaints are the SX model’s somewhat tacky – although not terribly offensive – faux wood trim and the dearth of covered interior storage cubbies. While the cubby situation is better than those of the Dodge Durango and the Mazda CX-9, the available space under the Kia’s center-console armrest and ahead of the gearshift lever fall far short of the massive center console storage spaces that competitors such as the Honda Pilot offer.

Despite this, the Telluride's merits far exceed its shortcomings. It’s a big addition to Kia’s lineup, and it’s sure to find buyers looking for an attractive, comfortable, and capable full-size crossover.