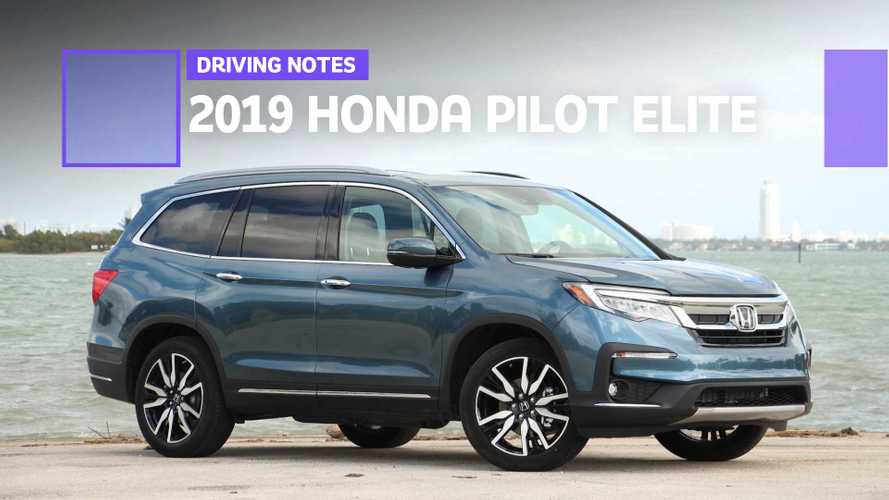 We say goodbye to our long-term Honda Pilot Elite.

After six busy months at Motor1.com's office in Miami, our long-term Honda Pilot is leaving us. During its tenure, the Pilot racked up thousands of miles running around Florida for work and play. All of that time behind the wheel gave our editorial staff an opportunity to develop thoughts on how good the Pilot works as a family vehicle.

At $49,065, the Honda Pilot Elite we’ve been testing since late 2018 is pricey but offers a bevy of features that make it a well-rounded family vehicle. With hallmarks such as a panoramic glass roof, heated and ventilated front seats, and a wireless phone charging pad, the Pilot offers a lot of high-end kit. Yet, it still faces exceptionally tough competition from a stacked segment. After six months behind the wheel, the Motor1.com editors are ready to share our favorite (and least favorite) things about the 2019 Honda Pilot Elite.

After approximately six months of use, the long-term Honda Pilot is leaving us. In that time, the blue box proved a willing video production vehicle, a comfortable people mover, and an able travel companion. The latter function associate editor and video producer Clint Simone and I put to the test on day one, when we picked up the full-size crossover at Honda’s Lincoln, Alabama manufacturing plant and quickly drove east, and then south, toward Motor1.com’s Miami, Florida headquarters. The nearly 1,000-mile journey was generally painless thanks to our top-of-the-line Pilot Elite’s standard in-dash navigation system, heated and cooled seats, and HondaSensing safety suite that includes kit such as adaptive cruise control and lane centering (both of which were a little too jerky in their reactions – but, nonetheless, still appreciated – for my tastes).

Clint and I swapped turns behind the wheel throughout our journey, and in due time we found ourselves sitting in one of the Pilot’s second-row bucket seats when relegated to passenger duty. With a big piece of glass overhead, a separate rear climate zone, and a dedicated rear-seat entertainment system, the middle row of the Pilot is arguably the best place to while away miles. The driver’s seat is less enticing, as the Pilot’s slow-to-react nine-speed automatic transmission (limited to Touring and Elite trims) lacks the urgency needed to whip the V6 engine’s 280 horsepower into shape and get the 4,319-pound, all-wheel-drive crossover moving with appropriate gusto at highway speeds. That said, the Pilot’s nicely damped, if slightly stiff, suspension and light but well-weighted steering give this Honda enough verve to mask its heft through turns.

The middle row of the Pilot is arguably the best place to while away miles.

And there’s no arguing with the Pilot’s generous cargo hold, which offers up to 82.1 cubic feet of cargo space with the second and third rows folded – a notable 10.9 cubes more than a Mazda CX-9, but a substantial 16.1 less than a Chevrolet Traverse.

No, the Pilot isn’t the most spacious full-size crossover available. Nor is it the most fun to drive. But it’s still plenty big and remains one of the segment’s more lively driving options. Nearly half a year with the Pilot confirms that Honda’s three-row crossover is a true jack of all trades, albeit a master of none.

For six months, our long-term Honda Pilot proved a valuable and capable partner, particularly on photo and video shoots lugging around equipment. And in that half-year, I've grown quite fond of the thing. What I appreciate most is its abundance of space. Outside of camera equipment, the Pilot carried the occasional table and chairs and even moved some cardboard boxes out of my apartment. The easy-folding third row, flat-folding second row, and relatively low liftover height makes loading and unloading a breeze.

But when erect, the second- and third-row seats still have plenty of legroom and headroom, making it easy to love as a passenger. The massive panoramic glass roof and large greenhouse make the entire space feel airy, too. Even with seven people inside of it, the Pilot never feels too cramped.

What I can't ignore, even if it seems trivial, is the sheer amount of fingerprints left on the infotainment screen and piano black center console (where the button gear shifter is) after use. The cheap plastic and glass attracts smudges and smears far too easily for a family-focused vehicle. Even with clean hands, the Pilot's cabin draws blemishes – imagine what messy kids will do. Not even wiping down the displays regularly kept the Pilot's interior clean for long.

Here's the good news: if fingerprints are the worst of my worries, Honda is doing something right. The Pilot is a comfortable and capable crossover that, even as it ages, remains a solid option in a competitive class.

After thousands of miles behind the wheel of our loveable long-term Pilot, Tracy Chapman, the time has come to say goodbye. As Greg shared, it didn’t take long to feel right at home in the car as we drove from the Honda manufacturing facility in Alabama down to Motor1.com HQ in Miami. And that’s exactly what it will serve as for most families that buy the Pilot – a second home used for transporting family members to soccer games, piano recitals, tutoring, and everything in between.

On multiple occasions, we packed the Pilot to its absolute limits; more often than not with camera equipment. But whether I was karting friends to the beach or colleagues to a work event, the Pilot always accommodated us and all of our crap. Honda knows what the average American family needs in an SUV, and it delivered that in a usable package that is ready to take a beating.

On multiple occasions, we packed the Pilot to its absolute limits; more often than not with camera equipment.

If the Pilot has an obvious vice, it’s the troublesome 8.0-inch touchscreen infotainment system. Though I am a big fan of its iPhone-style app layout, the darn thing just doesn’t consistently respond to commands. Some days it would accept touch inputs without issues, breezing between menus. Other days the screen would freeze and downright refuse to switch menus. My solution was to use Apple Carplay the majority of the time. And while that is a fine backup solution, Honda’s native software should work more consistently.

But even with its technology hiccups, the Pilot is a very enjoyable family vehicle that is absolutely worthy of your consideration. That said, the segment just got much more crowded thanks to the arrival of two very impressive entries: the Kia Telluride and Hyundai Palisade. The Pilot has its work cut out for it, but after six months of quality time with it, we think it’s up for the challenge.

Not being a permanent resident of Florida, I spent far fewer hours behind the wheel of our long-term Pilot than Clint, Greg, and Jeff. I did, though, take Tracy for a cross-state trip from Miami to Naples, Florida, where I pressed the Pilot into service as a chauffeur vehicle for a family wedding.

First, the trip from Miami to Naples – about a two-hour drive across the terminally boring drive on Alligator Alley – was hitch-free with the Pilot. It’s a supremely comfortable cruiser with light steering that’s easy to modulate over long hauls with just your fingertips, and the driver’s seat was comfy and cozy. What I didn’t like was Honda’s lane-centering technology that, when activated, simply bounced the Pilot off one side of my lane to the other. After 15 minutes of this, I felt like the ball in Pong.

Once Tracy and I arrived in Naples, we were immediately tasked with ferrying aunts, uncles, and in-laws around the snowbird town. Every passenger was complimentary toward the Pilot, even those having to sit in the third row. They especially liked having their own climate controls and window shades in the second row to beat back the Florida heat.

Ultimately, what I’ve learned to like most about the Pilot is its all-around goodness. It’s comfortable, easy to drive, swallows so much stuff, and operates worry-free. It’s one of those vehicles where when you hear someone bought one, you think, "Yeah, they’ll be happy with it."

I will echo Jeff’s sentiment that the worst thing about the Pilot is that it’s hard to keep clean. The Piano Black trim was a bad choice by Honda because of the fingerprint issue. Also, in a place like Florida, the Pilot’s carpet was probably carrying around an extra five pounds of sand. Why doesn’t the Pilot get the same onboard vacuum cleaner that’s offered in the Odyssey? That would help keep a beach from forming in the second row.

Other than that, the Pilot’s only problem is that it isn’t new anymore. As Clint mentioned, there are a pair of excellent new three-row SUVs now available from Kia and Hyundai, and the Toyota Highlander and Ford Explorer, the segment’s sales juggernauts, were just entirely redesigned. Sure, the Pilot did get a minor refresh for 2019, but the competition’s never been stronger.