An undeniable front-runner in the three-row segment.

The 2020 Hyundai Palisade has all the right pieces. A great engine, an upscale interior, and a proper three-row platform – contrary to the shoehorned third-row in the old Santa Fe XL – make this crossover an immediate front-runner in a crowded class. But alas, no vehicle is perfect. 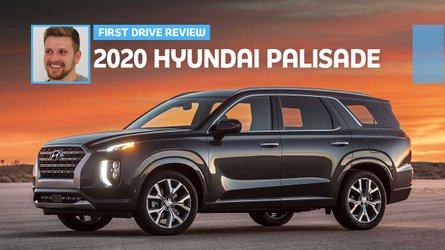 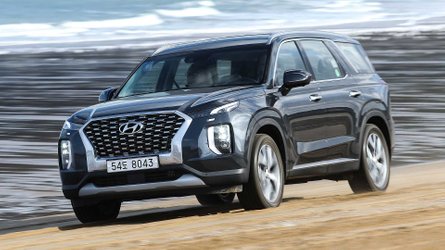 Fans of traditionally styled three-rows may not like the Palisade's polarizing face and unusual interior elements. And although Hyundai's latest infotainment system and digital instrument cluster setup stand out above the competition in most respects, the pair aren't perfect.

Even though it wears a Hyundai badge, the top-trim Palisade Limited feels like a luxury vehicle inside. Stitched leather lines the door panels, softer stuff covers the dash, a faux suede coats the roof, and high-quality shiny plastic fills the spaces in between. The knobs, switches, and dials are either metal- or rubber- finished; both far superior to the cheap plastic found in competitors.

All three rows of seats in the Palisade Limited wear the same high-quality stitched Nappa leather (standard on the Limited trim). Both driver and front passenger get power eight-way-adjustable, heated and ventilated leather buckets, while the driver alone makes do with four-way lumbar support and thigh support, as well.

Our only gripe style-wise (and it's a minor one) is the Palisade Limited's 10.3-inch touchscreen (versus the base model's 8.0-inch unit). It juts up from the dash iPad-style and comes coated in a cheap-looking piano black plastic housing that leaks into the instrument cluster. But this feels like a minor offense given the otherwise upscale nature of the cabin.

The Hyundai Palisade has three usable rows of seats – including a power-folding thrid row. The third row's 31.4 inches of legroom and 37.8 inches of headroom provide enough space for your six-foot tall author to sit comfortably. Those figures aren't best in class, admittedly (the Ford Explorer and Subaru Ascent are both a bit better), but there's little to complain about from the rearmost row – especially when considering that kids will likely spend the most time back there.

The second-row captain's chairs on our tester are inarguably the most comfortable seats in the house. Finished in the same quilted Nappa leather as the front buckets, the middle seats are just as soft and form-fitting. The second row affords 42.4 inches of legroom and 40.1 inches of headroom, which bests those of the Ford Explorer (39.0/38.2), Subaru Ascent (38.6/40.0), and Honda Pilot (38.4/40.2).

Power for all Palisade trims comes from the same 3.8-liter V6 producing 291 horsepower and 262 pound-feet of torque. Paired to an eight-speed automatic transmission, the Palisade has plenty of usable power. Even in a crossover that weighs 4,387 pounds (in this configuration), the powertrain never lacks grunt off the line or at highway speeds; especially in Sport mode, which yields a sharper throttle response and a livelier gearbox at the top of the rev range.

The Palisade's steering feel is responsive – with much better feel than its Kia Telluride cousin – and smooth, and the ride is soft. There is a noticeable amount of body roll in corners – expected of a crossover this large – but the Palisade never feels unwieldy, even at speed. And the suspension still feels better tuned than the setup on its Telluride cousin. This Hyundai crossover is for highway cruising, anyway, and it’s exceptional at that.

Credit where credit is due, the Palisade looks unique. You won't mistake this three-row for anything else on the road. That said, it's not the most attractive option in its class – especially when comparing it to its butcher, boxier cousin, the Telluride. The chrome treatment on the grille is overly intrusive, the “Crocodile Eye” headlight fixture looks interesting but doesn't mesh well with the rest of the front fascia, and the 20-inch wheels on the Limited model are very busy (SE and SEL models get smaller, better 18-inch wheels).

The 10.3-inch touchscreen on the Palisade Limited looks nice and responds quickly to touch inputs. The home screen has a clean layout, with three customizable tiles displaying things like navigation, audio, and weather. But once you start delving into various screens and menus, it feels cluttered and difficult to navigate.

Attempting something as simple as streaming audio from a Bluetooth device takes digging (pro tip: use the tactile “media” button instead). Using the overly complicated, fussy baked-in navigation system is stressful, the audio system isn’t great, and there's no tactile “home” button anywhere on the dash. The solution? Engage Apple CarPlay or Android Auto, which comes standard on all models.

We're nitpicking here… but while the Palisade's central touchscreen emphasizes customization, the digital instrument cluster doesn't. The 12.3-inch display changes color with drive modes, going from green (Eco) to blue (Normal) to red (Sport), but that's about it. Only the inner rung of the digital tachometer cycles through features like fuel economy, drive info, and tire pressure. The center portion of the screen displays the state of the adaptive cruise control, exclusively.

Sure, the Palisade does come with Hyundai's digital instrument cluster cameras, which display the adjacent lane at the flick of the blinker stalk, as well as a head-up display. But there's no way to display things like audio or navigation within the instrument cluster. If Hyundai wants to go through the trouble of making the dash digital, then we'd like more customization options.