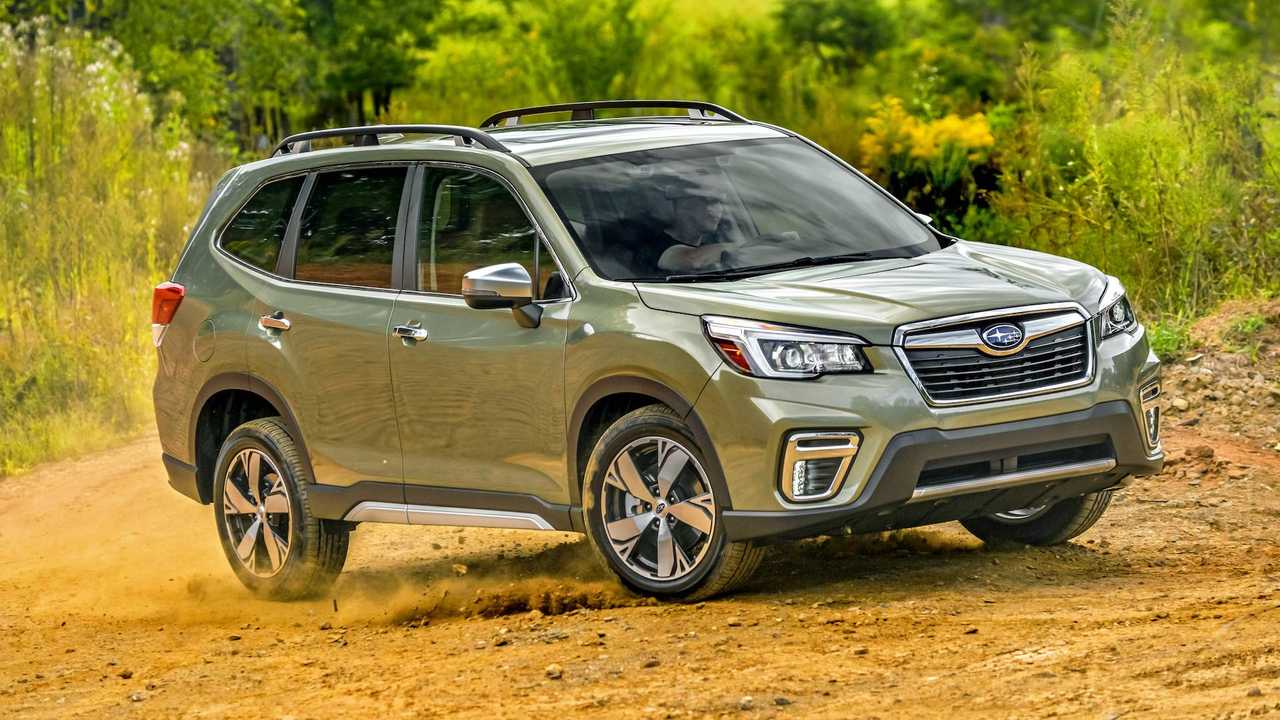 Boring but better, the new Forester is sure to appeal to the masses.

The 2019 Subaru Forester may sport a familiar face, but underneath its evolutionary sheet metal hides a completely new crossover. Built on the modular Subaru Global Platform (SGP) that also underpins the Impreza, Crosstrek, and Ascent, the fifth-generation Forester is both more polished and versatile than its predecessor.

Rigid and refined, SGP is a formidable structure that keeps undue noise, vibration, and harshness from entering the cabin of the Forester. Whether tackling the Blue Ridge Parkway’s twisting tarmac or plowing through North Carolina’s many pitted and pockmarked dirt roads, the top-of-the-line Forester Touring that I drove maintained a sense of calm and composure befitting its $35,270 as-tested price.

A secure and predictable chassis does not make for an engaging driving experience, though, and the crossover’s softly sprung suspension, in conjunction with its quick but lifeless electric-assist rack-and-pinion steering, made it a rather dull dance partner during the more dynamic portions of my drive. That said, the standard all-wheel-drive system, which now includes brake-based torque vectoring, proved beneficial, as it worked to reign-in understeer and keep the Forester on its intended path.

Although the 182-horsepower 2.5-liter flat-four packs 12 more ponies than last year (the engine shares only 10 percent of its parts with the previous 2.5-liter unit), the engine still lacks the oomph to properly move the Forester at higher speeds. Regrettably, the crossover no longer offers the turbocharged 2.0-liter flat-four of the prior Forester 2.0XT. Subaru relayed that low sales sealed the forced-induction engine’s fate. Ditto the previously available manual transmission. Instead, every new Forester comes standard with a continuously variable transmission (CVT). While the CVT in the Forester lacks the polish of those found in competitors such as the Honda CR-V or Nissan Rogue, the Subaru’s transmission is refined enough so as to be unobtrusive.

What the Forester lacks in accelerative abilities, it makes up for in relative efficiency. Every Forester includes items such as active grille shutters (to reduce aerodynamic drag at speed) and an automatic stop-start system. As a result, the Environment Protection Agency (EPA) rates the all-wheel-drive crossover at 29 mpg combined (26 mpg city and 33 mpg highway); equal to the front-wheel-drive Nissan Rogue and two mpg better than the combined figure of the all-wheel-drive Rogue.

Dynamic capabilities, however, are generally not the reason consumers purchase a crossover SUV. Versatility is paramount, and the new Forester benefits from gains in both passenger and cargo space courtesy of a 1.2-inch longer wheelbase and 0.8-inch wider body. Shoulder room, hip room, and legroom are up in both rows. Notably, rear-seat riders are now afforded 39.4 inches of stretch-out space, making for an improvement of 1.4 inches over the old Forester while also bettering the second-row of the far larger Dodge Durango by 0.8 inch. Cargo volume now stands at 35.4 cubic feet with the rear seats in place, and 76.1 cubic feet with the 60/40-split bench seat folded. (Both figures are up 1.0 and 1.4 cubes, respectively.) Subaru also widened the cargo area opening by 5.3 inches in order to ease loading.

Subaru widened the cargo area opening by 5.3 inches in order to ease loading.

The cabin itself is a more enjoyable place to spend time, too, as even the base $24,295 Forester is blessed with newly standard convenience features such as automatic climate control, a 6.5-inch touchscreen infotainment system with Apple CarPlay and Android Auto compatibility, and redesigned seats aimed at improving occupant comfort. Subaru’s EyeSight suite of active safety features is standard across the board and includes niceties such as adaptive cruise control, lane-keep assist, and an automatic front-braking system, while LED headlights ensure the road ahead is properly lit.

The Forester Touring I drove came equipped with almost every available goody on the menu, including an 8.0-inch touchscreen infotainment system with navigation, a WiFi hotspot, a heated steering wheel, heated front and rear seats, a reverse automatic-braking system, and Subaru’s DriverFocus safety technology, which uses facial recognition technology to alert the driver if they are tired or distracted. The technology can also store and recall up to five different individual faces, and can associate each face with presets for things such as personal climate and seat settings. DriverFocus works, too, and the system pinged me for keeping my eyes off the road for too long after I momentarily chose to look out the left window to take in the beauty of the Appalachian Mountains. For better or worse, DriverFocus is exclusive to the $34,295 Touring trim.

If you can live without DriverFocus, then you’re probably better off saving money and opting for the less expensive $26,695 Premium, the $28,795 Sport, or the $30,795 Limited trim. Each comes standard with a power driver’s seat, a cargo cover, hill-descent control, a large sunroof, and roof rails, which can support up to 176 pounds with the vehicle in motion and nearly 700 pounds of mass when the vehicle is static. Moreover, the Forester’s ergonomically friendly but somewhat utilitarian interior feels more appropriate at the sub-$31,000 price of Limited and lesser models.

The Forester Sport is arguably the sweet-spot in the model line, as it shares a number of standard niceties with the higher-spec Premium model including an 8.0-inch touchscreen infotainment system, the aforementioned Wi-Fi hotspot, automatic high-beam headlights, and a proximity key with push-button start. Alas, Sport buyers will have to put up with gauche orange accents throughout the cabin. Orange also makes its way to the lower-extremities of the exterior, where the bright hue complements a number of Sport-specific black exterior pieces.

The Forester Sport is arguably the sweet-spot in the model line.

With the exception of its distinct Sport Sharp drive mode (all other Forester trim levels offer a less aggressive Sport mode) and its steering-wheel-mounted paddle shifters that allow the driver to sift between seven predetermined ratios (the shifters are also standard on the Touring trim), the Forester Sport offers no obvious performance benefits over its less ostentatious counterparts. If an engaging (i.e. sporty) driving experience is what you seek from your compact crossover SUV, then you’d be wise to look at the livelier Mazda CX-5.

Earnest and inherently versatile, the safety-focused Forester aims for the heart of the compact crossover SUV market by being more things to more people. Still, its rather dull dynamics and uninspired powertrain means consumers that enjoy peppy performance will be better served elsewhere. Of course, Subaru could solve this issue by simply shoehorning the Ascent’s 260-hp turbocharged 2.4-liter flat-four into the Forester’s engine bay. Forester 2.4XT has a nice ring to it, if you ask me. 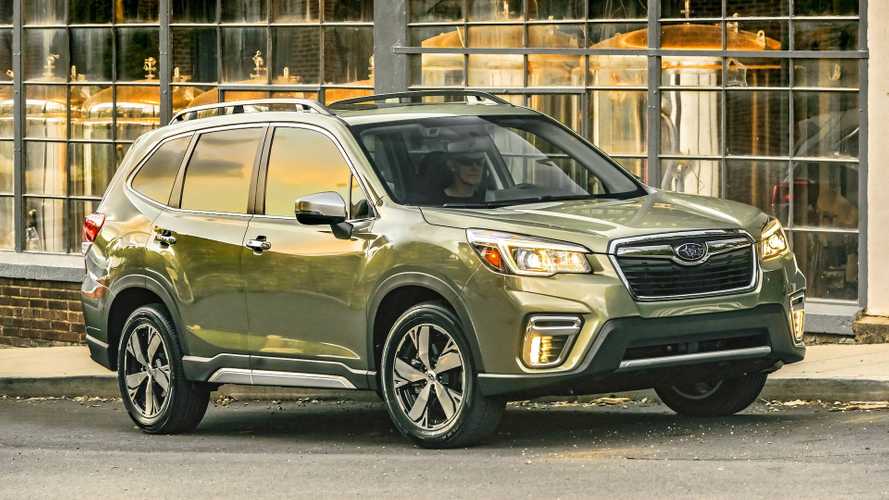 2019 Subaru Forester Side By Side