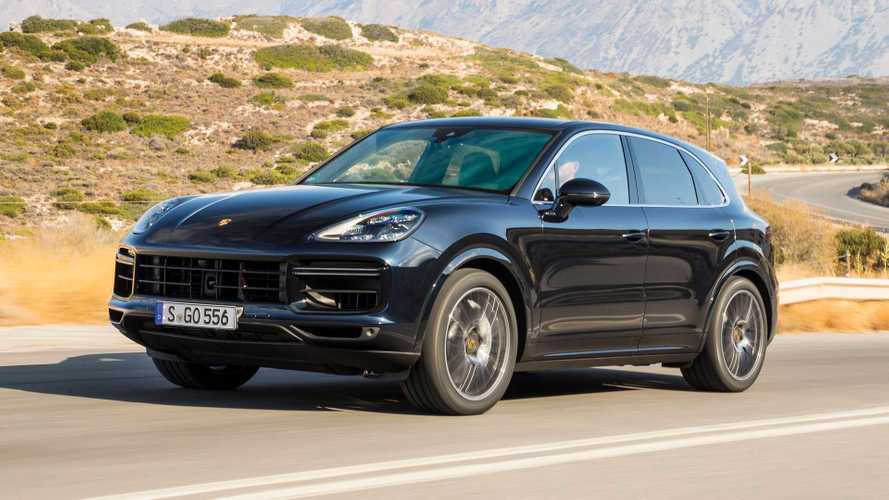 The third-generation Porsche Cayenne emphasizes the S in SUV.

It’s a 38-mile drive from my hotel on the north shore of Crete to the small airport to the east, in Sitia. There’s no freeway route – just a long stretch of winding roads, connecting the dots between tiny villages nestled in the Cretan hills. The 2019 Cayenne’s navigation system says it’ll take an hour and 15 minutes to complete the journey, but the reality is, I don’t have that kind of time. I’ve got to get there in 55 minutes, or I’ll miss the charter flight off the island. And while another night basking in the stunning scenery of this idyllic Greek island sounds blissful, the Porsche folks are all looking at me with the stern sincerity, their eyes silently telling me, you absolutely must make this flight.

Carrying On With Cayennes:

Unrelenting in its power and ability, it’s on this route over a sun-drenched Greek island that the Cayenne reaffirms its place as, truly, the sports car of SUVs.

The 4.0-liter biturbo V8 offers up 550 horsepower and 568 pound-feet of torque, and I’m feeling every bit of that oomph as I fly past slow-moving work trucks and microcars on my race to beat the clock. Porsche reps are calling out upcoming turns like I’m on a rally stage – ”90-degree right-hander,” “sharp left up the hill” – the Cayenne’s sophisticated new rear-axle steering helping me dig into tight corners with incredible agility and stability. The throaty V8 engine note is accompanied by a hearty exhaust roar every time I bury the throttle. The fat, staggered tires on 21-inch wheels claw into the haggard mountain roads, the redesigned air suspension filtering out minor imperfections before my hands can feel them through the steering. I’m driving this 4,800-pound Cayenne like it’s a 911, and every sensation is as visceral here as it is in Porsche’s smaller sports car. Unrelenting in its power and ability, it’s on this route over a sun-drenched Greek island that the Cayenne reaffirms its place as, truly, the sports car of SUVs.

I made the flight, and with time to spare. Should this route someday be renamed the Cretan Hill Course, know that the current lap record is 48 minutes, set by the Cayenne Turbo I’m calling “Greece Lightning.”

But despite my firsthand experience of the Turbo’s dynamic capability in my quest to not miss a flight, the truth is, it’s only one part of the third-generation Cayenne story. In fact, I’ll argue the more important changes are found in the base and S models, both of which are huge leaps forward both functionally and from behind the wheel.

I’m pleasantly surprised with the energy and verve baked into even the most basic Cayenne experience.

There’s a new turbocharged 3.0-liter V6 in the base Cayenne, with 340 hp and 332 lb-ft of torque – increases of 40 hp and 37 lb-ft over the outgoing model. Ding dong, the Volkswagen-sourced VR6 engine is dead, and this robust turbo powertrain makes the entry-level Cayenne feel anything but. Driving along the same mountain roads in Crete – though with not nearly the same sense of urgency, as my hour-long coffee break by the beach would affirm – I’m pleasantly surprised with the energy and verve baked into even the most basic Cayenne experience.

This 3.0-liter engine is a massive improvement not only in power output, but in delivery. There’s a smooth rush of torque right off the line, the eight-speed automatic transmission seamlessly swapping cogs imperceptibly. All Cayennes use this new ZF-sourced eight-speed unit, and it actually works more like a six-speed automatic with two overdrive gears. The Cayenne will reach its top speed in sixth gear; seven and eight are there to aid with fuel economy and nothing more.

But with each new corner, the base Cayenne asserts itself as an improved driver’s car. It’s a second and a half quicker to 60 miles per hour than its predecessor, and the turbocharged punch improves mid-range acceleration, too. There’s little lag from the turbo, and should you desire immediate punch, the Cayenne comes with the same push-to-pass boost button as other new Porsches, housed in the drive mode setting in the lower right section of the steering wheel. The steering is high on feedback and progressive in action, allowing for accurate precision with minimal effort. With 20-inch wheels (19s are standard) and the optional air suspension, the base Cayenne is surefooted over rough roads and equally supple and stable on pristine patches of pavement. There’s a much higher level of driver-to-road connection than in any previous Cayenne. If you put me in the standard Cayenne first and told me it was the S, I’d probably believe you.

The S feels like it embodies the best attributes of the base car and the Turbo, rather than trying to just nuzzle in between the two.

The Cayenne S, then, is both a step up from the base model, as well as a similarly huge dynamic improvement over its forebear. The S gets Porsche’s new 2.9-liter biturbo V6 from the Panamera, good for 440 hp and 406 lb-ft, allowing it to sprint from 0-60 in 4.9 seconds – a full second quicker than the base Cayenne. Larger brakes and Porsche’s Active Suspension Management (PASM) are standard on the S, with the air suspension again offered here as an option.

What I like most about the S is how it appears to have the broadest dynamic spectrum of the three Cayenne models. That is to say, it feels like it embodies the best attributes of the base car and the Turbo, rather than trying to just nuzzle in between the two. The majority of Cayenne buyers in the U.S. will likely opt for the standard car – and good for them, it’s better than ever before – but from a driver’s perspective, for my money, I’d have the S.

As good as the Turbo is here in Crete, the S feels just as lovely, with oodles of power and great feedback through the chassis and steering. Hustling in Sport and Sport+ modes, the S is a total champ, hunkered down and carving through corners with a precision unmatched in the performance SUV space. Even as I traverse a long series of gravel roads in the high hills, the Cayenne is stable and confident. Select the Normal drive setting, raise the suspension to high, and dirt roads are dispatched with aplomb. And being an SUV, the Cayenne comes with an off-road mode that lifts the suspension even higher and changes the engine and transmission mapping. Of course, here in the States, almost no one will actually take their Porsche into rough terrain. But all models will tow 7,700 pounds, if campers or boats are part of your Cayenne-oriented active lifestyle.

The majority of Cayenne buyers in the U.S. will likely opt for the standard car – and good for them, it’s better than ever before.

All Cayenne models have a redesigned interior, and one that’ll be familiar to Porschephiles. Look inside a new Panamera and then glance inside the Cayenne – the same sort of layout is utilized here, and it’s fantastic. A 12.3-inch touchscreen houses the Porsche Communication Management system, with wifi onboard and improved voice command functionality. (Fun fact: Tell your Cayenne “it’s too cold,” and it’ll raise the climate control by two degrees.) The crisp, colorful display comes through with super-high resolution – even better than the already-good Panamera – and while there’s a bit of a learning curve to totally master this system, I prefer it to what’s available in the competitive set. Rather than clutter up the smooth center console with buttons and knobs to control the infotainment, Porsche just lets you touch the huge screen. I’ll happily overlook a few fingerprint smudges for that increased ease of use.

In front of the driver, Porsche houses its analog tachometer in the center of the instrument panel, flanked on either side by digital displays. The left side shows traditional gauges, and the right side offers myriad information, including a G-force meter (it’s a Porsche), vital car data, or a map. Redundant steering controls for audio and infotainment functionality don’t clutter up the small-diameter wheel, and nestled in the driver’s seat, there’s great visibility ahead.

You sink into the cockpit of the Cayenne, despite its high ride height. Every seat in the house is comfortable and spacious, even the back row, which can easily accommodate three adults. There’s as much as 60.4 cubic feet of space with the rear seats folded, and no third row of chairs on offer (Porsche says no one is really asking for a three-row Cayenne, by the way). The Cayenne is as comfortable and as beautifully finished as ever – Porsche is as much a luxury carmaker as a performance brand, after all.

The Cayenne is as comfortable and as beautifully finished as ever. Porsche is as much a luxury carmaker as a performance brand, after all.

From the front view, the Cayenne’s lines have been smoothed out, with smaller headlight housings shielding LED units, standard on all models. Turbo models are differentiated up front by a huge blacked-out air intake area, and while I won’t go so far as to use the “gaping maw” analogy, the 2019 Cayenne Turbo is certainly a bit more… let’s say, mouthy, than before. From the side profile, the old and new Cayennes are virtually identical. It’s around back where you’ll find the most obvious updates, with slim taillights that span the width of the rear hatch, the “Porsche” text actually housed behind the lens glass. This visual updo better aligns the Cayenne with its 911 and Panamera siblings, and the full-width LED rear running lamps look very modern and very cool. Turbo models also get a neat little active aero flap integrated into the roof spoiler – it can be raised or lowered manually, and works as an air brake at high speeds. It’s the same as the one on the new Panamera Sport Turismo, and it’s mostly discreet, thank goodness.

Of course, being Porsche, your Cayenne can look as basic or as sporty as you like, all depending on which options you pick. If you’re going for the base or S models, my advice is to go for the $2,170 air suspension, as it includes Porsche Active Suspension Management, and check the $3,590 Porsche Dynamic Chassis Control; all of this is standard on the Turbo. Add the $1,620 rear axle steering to any model if you live in a place with great roads. A brand-new Porsche feature, the Surface Coated Brakes (PCSB) are optional on base and S models and standard on the Turbo, which reduce fade over time, offer tremendous stopping power, and don’t throw as much brake dust onto the wheels.

2019 Cayenne pricing starts at $65,700, goes up to $82,900 for the S, and tops out at $124,600 for the Turbo – before options, of course. Porsche won’t say when, but expect S E-Hybrid and GTS models to follow in short order, as well as something above the Turbo – maybe a ludicrous Turbo S E-Hybrid, like on the Panamera. Shortly after launch in Europe, Porsche will offer its new InnoDrive adaptive cruise control, which Jake Holmes recently tested. This new tech should be available in the U.S. right when the 2019 Cayenne goes on sale in late 2018.

Tech improvements and new design aside, it’s the improved dynamic ability that totally sells me on the 2019 Cayenne. The base model is a huge step forward – a proper Porsche, through and through. The S has enough vigor to satisfy even the most discerning enthusiasts. And the Turbo, well, rest assured you’ll never be late for anything ever again.