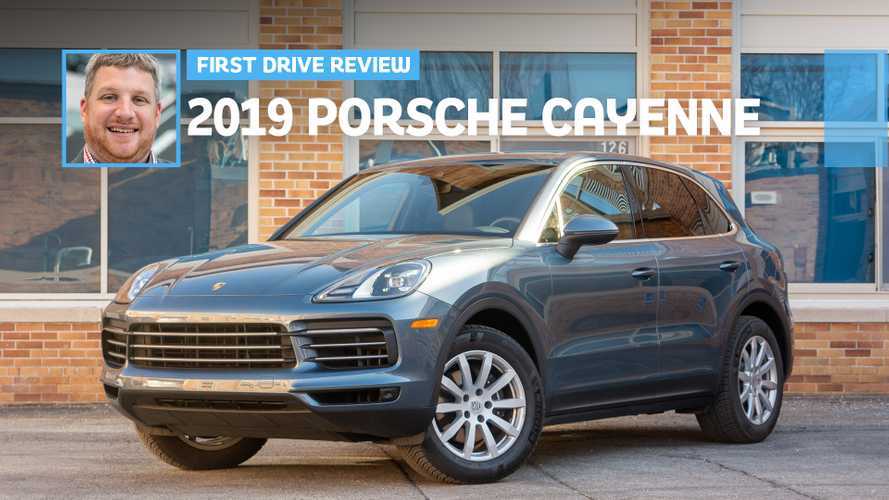 This may be a base model, but it’s still a Porsche.

People have strong opinions about Porsche. “You need this trim, not that trim. It’s not a real Porsche with that engine. How could you possibly get that body style?” But here’s a dirty secret: a base Porsche is still a Porsche.

That’s been true with the 911 and it’s true with the latest Cayenne, too. While down on power compared to other variants, the 335-horsepower version of Stuttgart’s acclaimed SUV does 90 percent of what the S and Turbo variants do for a more reasonable price, all while offering a less aggressive character. At the same time, it’s available with broadly similar equipment and customization options.

Bless Porsche. Outfit it properly – an easy task – and the base Cayenne looks every bit like the more aggressive variants. And that’s all while benefiting from a redesign that makes this the most attractive Cayenne yet.

The overall face is broadly similar to last year’s model. That’s to say it’s attractive. The Panamera-inspired headlights aren’t dramatically different than the second-gen Cayenne, but the new fascia and its horizontal intakes are far more attractive. Uniform in height and with a smaller section of body color trim beneath, the Cayenne also bears a closer resemblance to the latest 911. That’s no bad thing.

But it’s out back where the third-generation Cayenne improves the most, ditching the blob-like taillights of yesteryear for units heavily inspired by the 911. With a light strip tying the two lamps together and also serving as home for the “PORSCHE” badging, the rear end of the 2019 Cayenne is the best of its many good angles.

In the cabin, the 2019 Cayenne takes heavy inspiration from the Panamera sedan with an all-glass layout dominated by a 12.3-inch touchscreen display in the center stack and twin 7.0-inch displays that flank a central tachometer and digital speedometer. Touch-capacitive controls on the tall central display complement the Cayenne’s modern interior design, while the upright, horizontal shape of the dash harkens back to classic Porsches in much the same way as the new 911’s dash does.

Our lightly optioned base Cayenne is a reassuring sign that you don’t need to go mad with Porsche’s wide catalog of options for trim and upholstery. Aside from optional black leather on the seats and dash (we recommend this $3,750 expenditure wholeheartedly), the base cabin with piano-black trim and high-quality plastics scattered throughout is plenty good. Save your pennies on interior decor, unless you absolutely can’t live without carbon-fiber or wood trim (you can, we promise).

Porsche offers two distinct seats in the Cayenne: Comfort (with both eight- and 14-way options) and Sport Seats Plus. With all due respect to Cayenne owners out there who have ordered the sportier, more expensive chairs, there’s no reason to buy them. Our tester’s 14-way Comfort seats were endlessly pleasant during testing, providing ample support without feeling constricting. The optional 14-way chairs are a smart buy, too, as they offer a memory function. Aside from the seat, there’s adequate leg space and headroom for the driver and front passenger.

That’s also true in back. Even with the driver’s seat set up for your author’s six-foot, one-inch frame, the second-row bench is a pleasant place to hang out. There’s plenty of space for the long legged, while the tall-torsoed won’t brush their head against the roof liner. Two adults can easily lounge in the back seats, although as with all the Cayenne’s competitors, we’d hesitate to cram a third back there.

Cargo space is adequate, too, with 27.3 cubic feet of space available behind the second row and 60.3 cubes with it stowed. A low-enough rear bumper and a high-opening tailgate enhance the Cayenne’s versatility too. That said, a BMW X5 has 33.9 cubic feet with the seats in place, a max of 72.3, and a split tailgate that makes loading easier.

Noise, vibration, and harshness – a tricky category for a vehicle with such a dynamic character – is limited, although we’d wager our tester’s relatively tiny 19-inch wheels had a lot to do with that.

Featuring largely the same technology suite as the Panamera, the redesigned Cayenne’s multiple displays and touch-capacitive controls are both attractive and impressively simple to figure out. The instrument cluster features two 7.0-inch displays flanking a central tachometer, digital speedometer, and gear indicator. The main display dominates the vertically narrow dash’s center stack with 12.3 inches of real estate, feeding cleanly into the center console and its assorted controls.

The touchscreen’s graphics are as crisp as its responses to inputs. A light tap elicits a suitable response, while the wait time entering and exiting different menus is about equal to opening an app on an iPad. Simply put, the system rarely asks its operator to wait.

As for optional extras and customization, Porsche is pretty much the best in the game, offering owners a huge variety of equipment. While our Cayenne is (relatively speaking) a stripper, it’s possible to build even a base version of this SUV into a $130,000 vehicle, and that’s without dipping into some of the more absurd customization options.

That said, boatloads of extras and customization are a double-edged sword, and there are some disappointing absences in the Cayenne’s standard equipment. For example, heated seats and comfort access – two popular features – require a $6,470 option package. At the same time, those items are standard equipment on the $61,150 Mercedes-Benz GLE450 and the $60,700 BMW X5 comes standard with heated seats. You’re paying for the Cayenne’s dynamics, but you’re giving up some stuff in the process.

This shouldn’t shock anyone, but even the base Cayenne is a charming driving partner. Featuring a turbocharged 3.0-liter V6 that produces a healthy 335 horsepower and 332 pound-feet of torque, this Porsche offers up a 5.6-second sprint to 60 miles per hour (with the Sport Chrono package’s launch control engaged) and a top speed of 152 mph. But those modest numbers tell only half the story.

This turbocharged 3.0-liter is a fine engine, offering abundant low-end torque, ample mid-range punch, and a pleasant acoustic signature. While the fire-breathing nature of the Cayenne S’ turbocharged 2.9-liter V6 is certainly tempting, for most consumers, the base 3.0-liter will do everything they ask of it. In fact, the base SUV shares its 7,700-pound towing capacity with the more powerful Cayenne S.

Aiding and abetting the 3.0-liter is an eight-speed automatic transmission. The automatic isn’t one of Porsche’s excellent dual-clutch transmissions, but we didn’t miss that quick-shifting setup during our week with the Cayenne. Quick to engage off the line and able to blend into the background during everyday driving, the eight-speed auto is also a fair amount of fun in manual mode, where the gearbox does a fair impression of Porsche’s PDK rig.

Our test model lacked all of the Cayenne’s available performance and handling enhancements. That means no adaptive air suspension, Porsche Dynamic Chassis Control, rear-axle steering, or even an oversized set of wheels. Our tester wore the smallest available wheels – 19-inch alloys – and the standard adaptive dampers. And yet, the Cayenne felt both impressively agile and composed. The base suspension manages body motions tightly, even if those motions are present in greater abundance than if our tester carried the $9,400 of available ride and handling upgrades. And while they aren’t the prettiest setup, the $600 Cayenne S wheels provided a comfortable, relaxed ride at highway speeds and on rougher city streets.

While our tester is light on active safety gear, Porsche offers an impressive array of active safety gear as options. An available $6,240 Assistance package collects the best, ranging from the excellent InnoDrive system to more common features like lane-keeping assist, traffic sign recognition, a night vision system, and a surround-view camera. Our tester did include blind-spot monitoring as part of the $6,610 Premium package.

As for crash testing, neither the National Highway Traffic Safety Administration nor the Insurance Institute for Highway Safety have crashed the Cayenne. The optional swiveling LED headlights, though, would likely rank well with the latter. They’re also part of the Premium package.

Despite being the least powerful Cayenne, the V6-powered base model only returns 19 miles per gallon city, 23 mpg city, and 21 mpg combined, according to the Environmental Protection Agency. That doesn’t compare too favorably with German competitors.

Porsches aren’t cheap vehicles, but our Cayenne’s $66,750 staring price and $80,300 out-the-door sticker isn’t exorbitant. In fact, considering its dynamic advantage, the Cayenne’s base price being $6,050 higher than the X5 and $5,600 more than the GLE450 doesn’t bother us. For a more natural dynamic competitor, though, the Cayenne isn't bad – the Mercedes-AMG GLE43 starts at $68,150.

While Porsche’s options sheet is expansive, the automaker makes life easier with its Premium and Premium Plus packages, which bundle some of the most desirable features in one place. Our tester carried the lesser of the two packages, demanding $6,610 and adding a Bose audio system, proximity key, 14-way front seats, an auto-dimming rearview mirror, a panoramic sunroof, LED headlights with active front lighting, blind-spot monitoring, heated front seats, an ambient lighting system, and Porsche’s Power Steering Plus system (it adjusts the steering effort so the Cayenne is easier to manage at low speeds).

Other options on our tester included a $3,750 black leather interior, $600 Cayenne S wheels, the $1,130 Sport Chrono package (Sport Plus and Individual driving modes, an analog/digital stopwatch on the dash, launch control, and a Sport setting for the stability control) and $800 for the handsome Biscay Blue paint. There’s also a $660 trailer hitch.

Correction: A previous version of this review indicated the Cayenne did not come standard with LED headlights. This was incorrect. The review has been updated accordingly.