Feet Off The Pedals: Testing Porsche InnoDrive In Germany 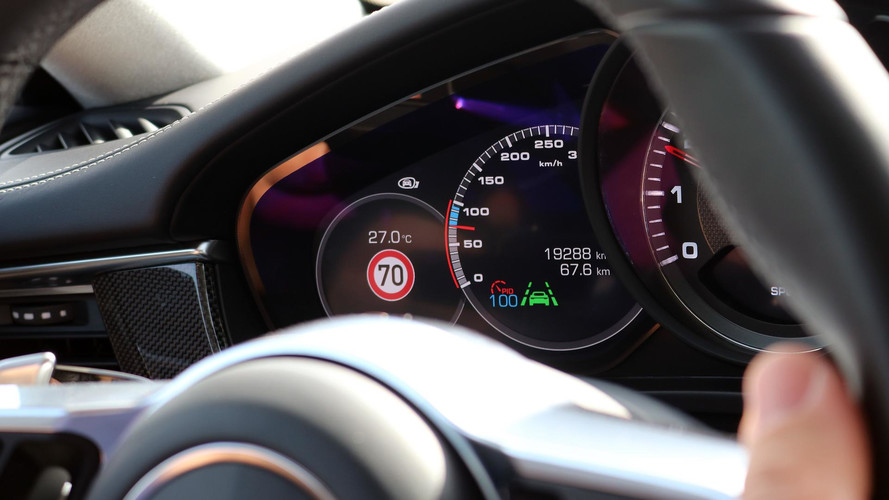 It won’t steer for you, but InnoDrive is intended to do pretty much everything else for the driver.

Porsche manufactures incredible cars that are a joy to drive. How odd, then, that the company is introducing a new technology that will require drivers to do even less behind the wheel.

That is an alarmist take on InnoDrive, which is launching now on the Panamera and next summer on the 2019 Cayenne. Rather, Porsche wants you to think of it as an advanced cruise control that can at the same time reduce fuel consumption and help drivers stay relaxed.

The key difference between InnoDrive and extant adaptive cruise systems is that Porsche’s technology watches for curves and slows the car accordingly. There’s no steering input applied (though the system is combined with lane-keep assist), but it means that InnoDrive can safely be engaged even on meandering roads.

“It’s not a system for inner-city driving, it’s a system for highway traveling and country roads, and for relaxed traveling,” explains Gernot Döllner, vice president of the Panamera product line.

It works like this: With a route set in the navigation system, InnoDrive is engaged by tugging on the same adaptive cruise control stalk familiar from other Porsche models. The car’s computers “look” two to three miles ahead on the route for elevation changes, curves, and speed-limit changes, and then proactively select the best speeds for each section. Driver steering angle is also taken into account; crank the wheel around a hairpin and the car will automatically brake appropriately.

“The car will automatically adjust the speed to the conditions around,” Döllner says, with the goal of selecting “the perfect and efficient drive strategy.”

I engage the system on roads outside Stuttgart and let InnoDrive take the, uh, pedals. I still have to steer, of course, and my right foot hovers apprehensively over the brake pedal. Sure enough, as we approach turns, the car brakes and slows to what feels like an appropriate pace for the various bends. Once I straighten the wheel, the car accelerates back up toward the speed limit.

When I reach a town, too, the car’s cameras detect the new speed-limit sign and automatically slow – or accelerate – the car to the appropriate velocity. The cameras also can pick up cyclists or pedestrians and slow down for them. And as with any adaptive-cruise system, InnoDrive slows down to keep a safe following distance behind any other traffic.

So, I’m still technically driving, in that I’m braking for intersections, turning the steering wheel, and so on. But it’s amazing how well InnoDrive can handle velocity control on the types of country roads that would usually confound adaptive cruise. As Döllner warned, though, town and city driving is not perfect, as I still have to brake for traffic lights, roundabouts, and other hazards.

It takes a bigger leap of faith to let the computer drive briskly than to let it cruise casually.

There’s an even bigger benefit to using the system than just reducing driver load: fuel efficiency. On the right road in a plug-in hybrid vehicle, Porsche claims InnoDrive can improve efficiency by 10 percent. It might, for instance, burn gasoline to climb a steep hill then recharge the battery all the way down the other side. And by slowing and accelerating for curves more proactively than a human driver, it can waste less fuel on twisty roads.

The downside is that routes on straight highways won’t really offer an efficiency benefit with InnoDrive: “On the autobahn, it’s really similar [efficiency],” Döllner admits. “You don’t have curve radiuses on the autobahn where the system would slow you down.”

The Panamera is still a sporty car, of course, and as I dial the drive-mode selector up from Comfort to Sport, InnoDrive takes corners a little more enthusiastically. This is harder to stomach; it takes a bigger leap of faith to let the computer drive briskly than to let it cruise casually.

It’s not just me who feels that way: in development, Porsche was able to make InnoDrive corner much more aggressively, but test drivers found it unnerving.

“Even experienced drivers were scared about the speed the vehicle would allow,” Döllner says. “It’s faster than we expect 95 percent of our customers would accept.”

Porsche is okay with drivers using InnoDrive in inclement weather like rain and snow, however. Döllner says the system uses input from the stability-control and wheel-speed sensors to gauge traction levels and adjusts its speeds appropriately.

It’ll be a pricey proposition, bundled into the $5,370 Assistance package on the 2018 Panamera.

The system currently only works in areas where Porsche has high-quality mapping data, meaning Western Europe and the U.S. But as more mapping data is available, it’ll be offered in more places.

After a few hours behind the wheel, I’m still not sure how I feel about InnoDrive. On a long backroads drive in a hybrid car, the efficiency gains and reduced driver fatigue would be welcome. But on highways or in the city, InnoDrive’s advantages over regular adaptive cruise systems are smaller. So, too, if you don’t have a route set in the on-board navigation system; if InnoDrive doesn’t know which roads you’re taking, it cannot as easily figure out how to drive.

When used as intended, it’s an impressive piece of tech that works pretty much flawlessly. My question is just whether a Porsche owner would want to use it; this seems like a technology better suited to a plush Bentley than a turbocharged Porsche. It’ll also be a pricey proposition, bundled into the $5,370 Assistance package (which also includes night vision and lane-keep assist) on the 2018 Panamera.

As a driving aid, then, Porsche InnoDrive is an interesting advancement. Yet it feels like it’s really an in-between step that leads the way toward the more advanced autonomous cars that are undoubtedly heading to our roadways soon.