This Bronco flies over rocks instead of crawling on them.

We've seen spy shots, and just yesterday we reported on a new trademark filing from Ford that could be related to a high-performance Bronco. Now, Ford has an official teaser photo that just dropped on social media, and it certainly suggests a Bronco Raptor is imminent. Or it could be the Bronco Warthog. More on that in a bit.

At this point, there's no question that Ford has something big in the works for its new Bronco. Ironically, the standard model isn't even available for sale yet – the first Broncos won't reach dealerships until next spring – but that's obviously not stopping Ford from adding more fuel to the Bronco frenzy that's been cooking all summer long.

A high-performance Bronco was never really in doubt. After all, our first official taste of Ford's reborn off-roader was the race-bred Bronco R for Baja. In essence, high-speed off-road development happened simultaneously with development of the showroom-stock Bronco. We have to think there was cross-communication between the departments so a Raptor version could essentially be plug-and-play. Therein lies perhaps the more interesting question, however. Will Ford call this tuned Bronco Raptor, or Warthog?

Around the same time as the Bronco's launch, a rumor surfaced that an extreme version of the Bronco wouldn't wear the Raptor moniker from the F-150. Rather, it would be called Warthog, and frankly, that rumor was unsubstantiated until very recently, when Ford trademarked Warthog with the U.S. Patent and Trademark Office. Even still, the rumor is just that – the trademark states that it could literally be used for any non-commercial land vehicle Ford builds. Our sources still favor Raptor as the high-flying Bronco's name, but there is mounting evidence for Warthog as well. 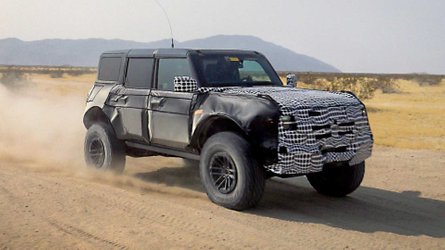 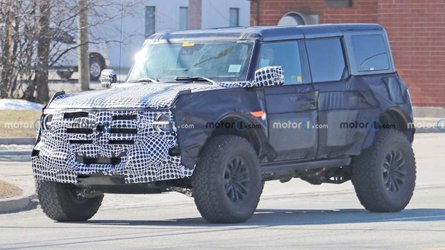 Ford Reportedly On The Fence About Bronco Warthog Name

We don't have much information as to the mechanical upgrades for this model. The engine could be the same twin-turbocharged 3.0-liter V6 used in the Ford Explorer ST, where it makes 400 horsepower. A tuned-up version of the boosted 2.7-liter V6 already available in the Bronco is also a possibility. Don't expect a V8, however, as we recently reported such an option would likely be more trouble than it's worth.

When might we learn the truth – and the name – of this new Bronco endeavor? That's hard to say, but we doubt this machine would go on sale at the same time as the standard SUV. In other words, we could have several months of waiting ahead of us.