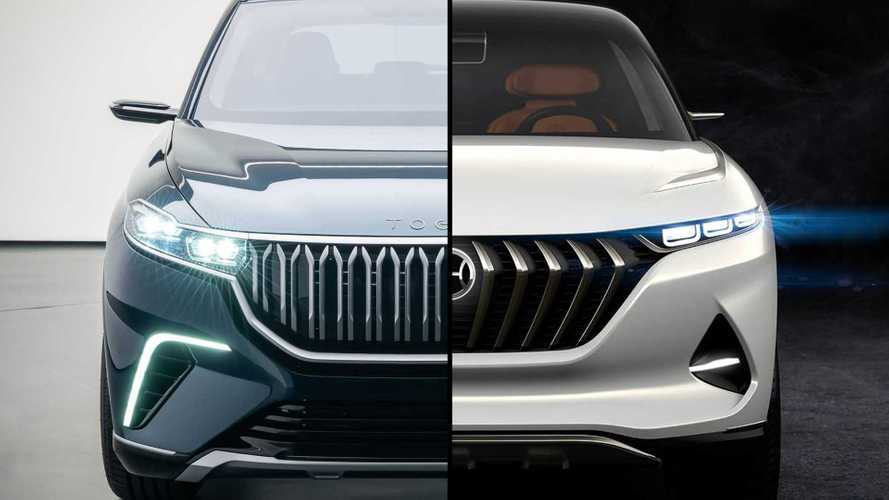 Some elements of the TOGG SUV may draw from prior Pininfarina concepts.

Today, Turkey pulled the covers off the first prototype SUV from TOGG, the country’s native automaker. It’s an all-electric affair that’s decidedly handsome and well-proportioned, and as we perused images of the new offering we had a sense of déjà vu. A few Motor1.com readers picked up on this as well, and as we scrolled through previous pages of SUV debuts we came upon the Pininfarina K350 Concept, first revealed way back in April of 2018 and pictured below on the right. The new TOGG SUV is on the left.

There's a resemblance between these two models, but actually, it shouldn’t be a surprise. TOGG did work with Pininfarina on this SUV design, and though the automaker says insight for the shape came from Turkish customers, we suspect there was at least some influence from Pininfarina’s aforementioned concept. In particular, the TOGG’s front end is similar to the K350's, right down to the silver faux skid plate at the base of the chin. It’s not a bad thing by any means, as the front end's look is very striking and satisfying in a symmetrical way.

The connection between the two cars appears to be strongest in the design of the grille and headlights. Both cars house their grille and headlights in the same surround with the headlights extending the upper line of the grille's surround out around the fenders. It's a great look, and both cars wear it well in their own way. The concept's version, for instance, is organic with smooth curves, while the TOGG's is geometric with some sharp corners.

The Pininfarina K350 Concept Is A 400-HP All-Electric SUV

The similarities mostly end there. In profile, the TOGG doesn’t have the dramatic up-kink to its rear pillar and floating roof design as seen on the K350, and its overall shape is more like a traditional SUV than the four-door coupe profile of the Pininfarina concept. Out back, the lower valences of both vehicles share similar lines, but so do dozens of other SUVs. The rest of each vehicle's rear end including their tailgate shape, rear taillights, and window design are completely different.

The last we heard of Pininfarina’s efforts on the K350 concept, the firm was working with Hong-Kong-based Hybrid Kinetic Group. At the time, Pininfarina was also collaborating with the company on EV sedans, and its H600 Concept is also a very close match to TOGG’s new compact sedan concept – a photo of which was included with the collection of SUV shots. TOGG’s concept is below on the left, with the H600 Concept from 2017 on the right. Again, the front end, particular the grille and headlights, is where the similarity is strongest.

TOGG says its new EV SUV will launch in 2022. The platform will reportedly underpin five different models, including the compact sedan featured above. They're all likely to wear the same grille and headlight design that evokes this prior Pininfarina concept, but the rest of their styling will likely be pure TOGG and dictated by the needs of their segment and customers.