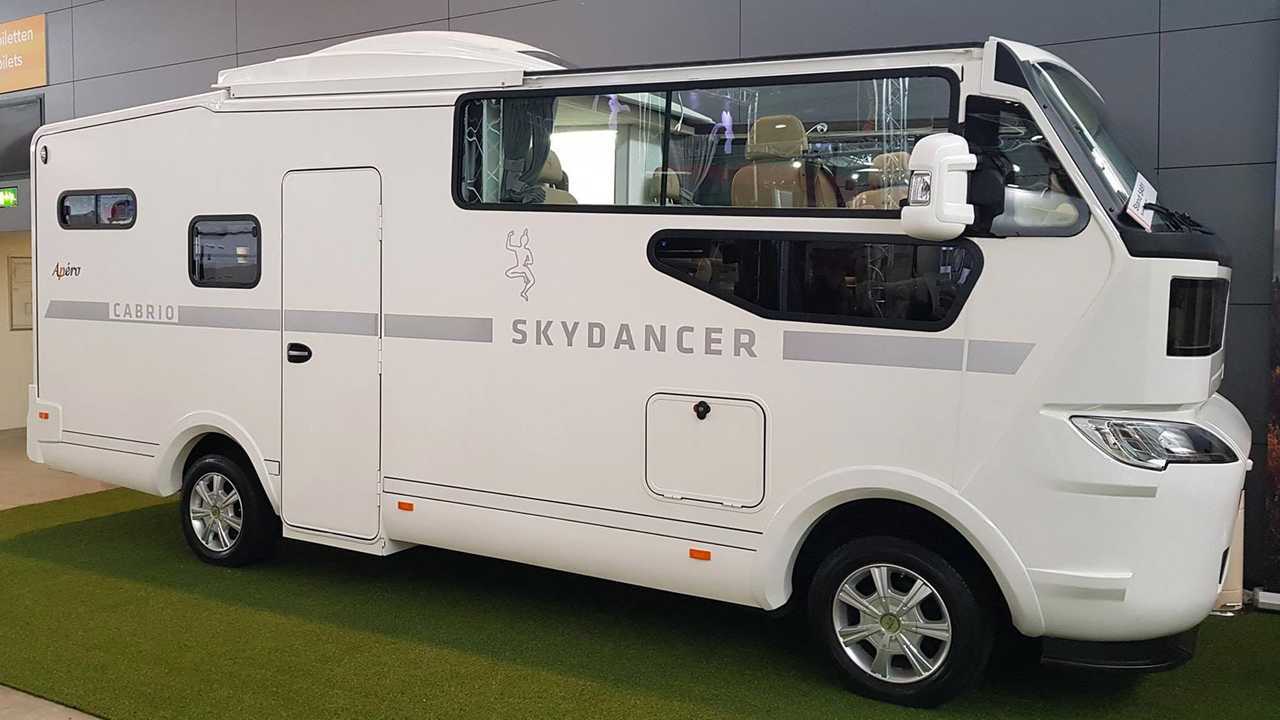 The double-decker design features a bed on the upper level for sleeping under the stars with the roof open.

Convertibles and motorhomes are two automotive segments that don't generally mix, but the new RV maker Skydancer is shaking things up at Germany's CMT Show by revealing the Apéro – the first RV cabriolet. Drivers can even keep the top retracted while on the road to enjoy the fresh air.

The Apéro has a two-tiered design with a living area on the lower level and the driver's cockpit on the higher portion. When open, the electrically operated roof lets sunshine into the upper level, and there's seating for four people there to enjoy the breeze. The chairs can convert into a bed measuring 78.74 inches (200 centimeters) long and 49.21 inches (125 cm) wide, which Skydancer claims is enough room for two people to enjoy a romantic evening under the stars. If the RV is a rockin', don't come a knockin'.

The bathroom features a toilet and shower. To save room, the sink slides into the wall when not in use. There are 90-liter tanks for fresh and waste water.

Live The German Van Life With These RVs Debuting In Stuttgart

The Apéro rides on a Fiat Ducato chassis and packs a 2.3-liter Multijet turbodiesel engine producing 148 horsepower (110 kilowatts). In an odd touch for an RV, the gearshift rises up from the center console when the driver inserts the key into the ignition.

The convertible RV is only available in Europe for now. However, a page on Skydancer's website has the company soliciting for American investors to fund opening a production facility to build the Apero in the U.S.

This is Skydancer Apéro - the world's first camper-cabriolet!

At the CMT 2019 in Stuttgart, the production version of the cabrio camper was first shown. This is a unique project created by one man - Piotr Kubiński. The whole is based on Fiat Ducato, but after the original vehicle there is practically no trace.

The idea of creating a camper in the convertible version, was born in Piotr's head a long time ago. At the beginning, he created a prototype (concept) of such a vehicle. For the construction he used the furniture he had at hand and the used truck - the Mercedes Atego. He traveled all over Europe with this vehicle, visited many caravanning fairs. The feedback from both (the media and the visitors) was extremely large and positive, so the designer decided to create a production version of his idea.

The cabrio camper is based on Fiat Ducato, under the hood we will find a 2.2 Multijet engine with 150 horsepower. The front serviced damper is designed in such a way that in the future there could be a fully electric drive. In the front, we also find the greatest innovation of the project, ie two separate levels. On the first, higher, the so-called "A cab" with 4 seats for driving. Both the seats and the steering wheel are trimmed with leather. The side windows are long enough to reach up to the second row of seats. Thanks to this, we get an extraordinary, panoramic view not only on the road, but also on the surrounding views.

In the front you can also find an electrically opened roof, which in a few moments overlaps the rear part of the vehicle. In this way, for the first time in the world, we get a camper in the convertible version. What is important, the roof can also be opened while driving, not just a standstill.

The camper is 7 meters long and 3.05 meters high. In the front of the vehicle we are sitting more or less at this height. This idea opens us to a completely new, previously unknown experience.

In the front of the camper we can also create a double bed. The process takes no more, than two minutes. After this time, we have a lot of space (200 cm long, 125 cm wide) for two (and more) people who can stay on the upper deck with an open roof. Romantic evening for two with the opportunity to admire the stars straight from the deck of a camper? With Skydancer Apéro it is possible!

The front seats are rotatable, but their blockage was solved completely differently. After turning the key in the station, the seats lock in the position enabling the ride. After the engine has been switched off, the lock "switches off" and then we can turn it towards the rear of the vehicle. Each pair of armchairs has a table at your disposal, ideal for morning breakfast and coffee. Armchairs with automatic locking are not everything. The gear lever, after turning the key, slides out of the floor. During the stoppage, it hides in it to increase the comfort of moving around this part of the motorhome.

The Aperro Skydancer still has a very low weight with all the mechanisms used. In the "ready to ride" state it weighs around 3080 kg (empty about 2830 kg), so we have 420 kg to load. It's a great result.

The lower deck is surprising, above all, a very large space. Freely in the "salon" can move the entire crew living on board. At the back of the vehicle there are two double beds 200 cm long and 140 cm wide. Entrance to it is facilitated by stairs, which are easily hidden in the direction of the garage - this is another Skydancer's innovation. Next to it, we find a large Dometic fridge (145 liters), which we have free access to even when the stairs are spread.

In the kitchen corner you will find a sink and a gas stove. If we need a larger working space, we will lay out an additional table in a few moments, which later can be transformed into, for example, a coffee pad for people resting in the back bed. As you can see, Skydancer Apéro is full of little things that greatly improve comfort.

In the camper, we also find a bathroom connected to the toilet. Here, too, we find an interesting trivia. The sink "hides" in the wall and thus allows easy access to Thetford's toilet.

At the end, it is worth paying for an enormous garage in the back. Easy access to it is provided by a wide flap. Inside we pack scooters, bikes and all necessary (and unnecessary) luggage.

The heating is standard, gas. The whole is powered by a Truma Combi boiler. As the constructor himself says, the camper is intended to be used during the main caravanning season, i.e. during the spring and summer.