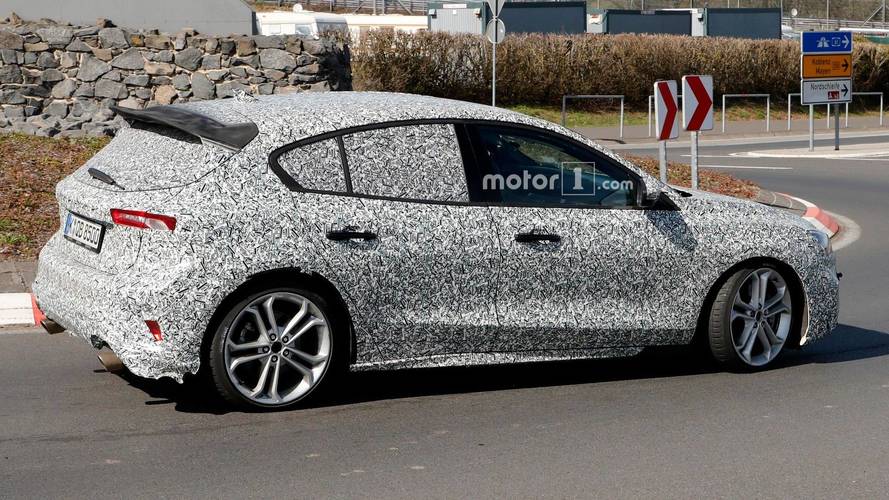 Ford's hot hatch is stretching its legs at the Nurburgring.

[UPDATE, April 18] The same prototype has been spotted once again, but this time around it had a slightly bigger roof-mounted rear spoiler. The new images have been added at the beginning of the gallery, below.

Hot on the heels of the recently launched all-new 2019 Ford Focus, our spies have sent us two batches with the first spy photos of a sports version of the hatchback. While we’re not entirely sure if this is the ST or the RS variant, we’re super excited to see the Blue oval is already cooking up something hot for the new Focus.

Our guess is we’re actually looking at the next generation Focus ST - judging by the sports body kit, which is aggressive but not really drastic, this is not the hardcore RS. We’ve already seen some of the exterior details of this trial vehicle on the Focus ST Line, but this prototype also features a more pronounced fixed spoiler on the boot lid, different side sills, and larger air intakes in the front bumper. Also notable are the large 18-inch wheels, which should come as standard.

Details about the new Focus ST remain a mystery at the moment, but Ford is reportedly planning to install a downsized 1.5-liter four-cylinder turbo engine under the hood. Different sources claim engineers of the company will modify the existing 1.5-liter turbo of the model to deliver somewhere in the region of 260 horsepower (194 kilowatts), making the new ST slightly more powerful than the outgoing model.

The diesel ST will also receive a successor, as the sporty hatch (and wagon) with an ignition compression engine currently accounts for roughly half of the Focus ST sales. This one should stick to the 2.0-liter engine, which could be massaged to deliver 190 hp (142 kW), just like in the facelifted Edge for the European market.

Naturally, the ST will also receive larger brakes and sports suspension. As standard, both the gasoline and diesel variants should come with a six-speed manual gearbox, while optionally available will be the new eight-speed automatic.

As far as the next generation Focus RS is concerned, it will reportedly arrive in 2020 and will receive hybrid power. The 2.3-liter turbo engine of the current RS will be mated to a mild hybrid system, which should boost the output to more than 400 horsepower and 425 pound-feet (576 Newton-meters) of torque.