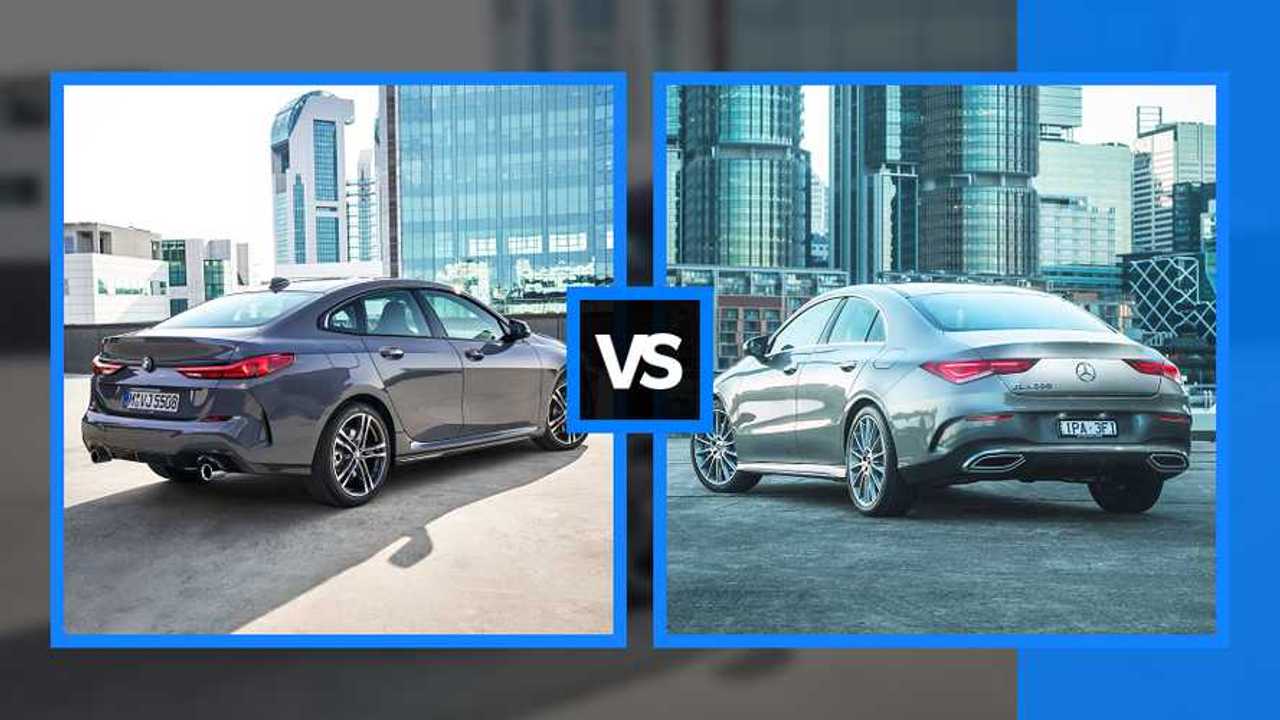 Here’s how the two premium vehicles stack up side-by-side.

The historic rivalry between BMW and Mercedes-Benz continues and now extends to a new segment. The niche class of premium compact four-door coupé-sedans (yeah, we know...) was started by Mercedes with the CLA back in 2013 and the Bavarians are finally joining it with the first-ever 2 Series Gran Coupé. The recipe the two brands follow is pretty much identical – a low and profiled body with a sloping roofline towards the tail, four doors, and sporty overall appearance.

While the CLA has been on the market for about six years now, the 2 GC is a brand new entry into the segment. Production of the new Bimmer will kick off in November before the car goes on sale, likely early in 2020. While BMW has yet to release pricing details, Mercedes is asking at least $37,645 for the front-wheel-drive CLA 250 in the United States.

Visually, the two cars are very similar and very different at the same time. While the similarities in the overall shape are obvious, the two cars rely on different approaches when it comes to the little details. Mercedes plays it safe with clean, round lines, while BMW responds with more aggressive and angular shapes.

At the front, the BMW has a bolder fascia with a slightly higher nose and massive air intakes integrated into the bumper. The Merc, in turn, has a more traditional sedan look with a more sculptured hood and sleeker headlights.

It’s almost the same story at the back – the BMW has a wider appearance with sleek taillights and aggressively-shaped diffuser at the lower part of the bumper. The little gills in the bumper create a visually wider view, in contrast to the CLA’s more restrained and sleeker rear end.

The cabins of the two vehicles represent two very different design philosophies. It’s probably safe to say that Mercedes is taking the unpaved road here with a more flashy and shiny interior. The Bavarians are playing it safe with yet another interpretation of their proven dashboard layout. The 2 Series Gran Coupe almost feels like the 3 Series.

In terms of technologies, the two are probably closer than you might believe but the execution is, again, very different. The CLA relies on two large displays that are visually connected, while the 2 GC has two separated screens, one for the infotainment system and one for the instrument cluster.

The 2 Series Gran Coupé, based on the platform of the new 1 Series, is slightly shorter, wider, and lower than the Mercedes CLA. Of course, we are talking about a few millimeters but they still matter. See the table below.

Indeed, the millimeters are important. The interior height sees the Mercedes having a slight advantage at the front seats, but the roles are switched when it comes to rear seats.

The CLA then takes the lead again when considering the luggage capacity. In the fight against weight, BMW seems to be a step ahead with the lightest model from the range, the 218i, being about 88 pounds (40 kg) lighter than the equivalent CLA.

When you take a look at the engines that are offered for the two four-door coupes, you’ll immediately notice the lesser variety of options for the 2 Series Gran Coupé. This is largely due to the fact that the model from Munich has just been presented and will be on sale about a year after the market launch of the CLA. Depending on the region, to the three diesels from Mercedes, BMW responds with just a single compression ignition motor. Seven gas units are available for the CLA and just three for the 2 GC.

*models available in the United States

In terms of power and performance, the 220d Gran Coupé and the CLA 220 d show almost identical numbers with the Merc being just 0,4 seconds faster from zero to 62 mph (0-100 kph). In turn, the entry-level gas option, the 218i Gran Coupé, is a bit more powerful and efficient than the corresponding CLA 180.

On the other side of the spectrum, the most powerful 2 GC will likely remain the 306-hp M235i xDrive, against which Mercedes has the CLA 35 4Matic with the same amount of power. However, the Bavarians don’t have an answer to the CLA 45 and CLA 45 S models with 387 hp and 421 hp, respectively.