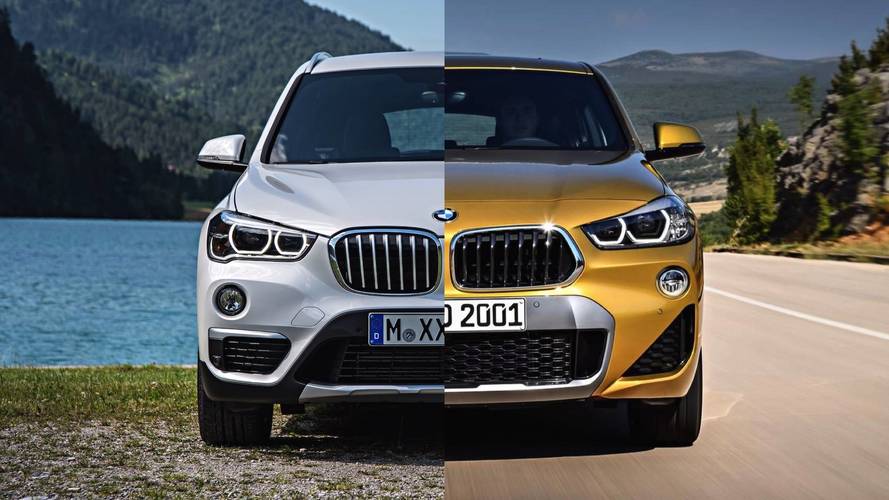 How does the new BMW X2 stack up to the X1 on which it's based?

BMW is expanding its small SUV range with the brand-new X2. Positioned snugly between the X1 and the larger X3, the new X2 is actually three inches shorter in length than the X1 on which it's based, and nearly three inches lower, too. Paired with a powerful turbocharged four-cylinder engine, BMW would argue that its newest offering is the sportiest small SUV of the bunch – but how does it compare against the X1? Let's take a look at the two SUVs side-by-side to find out.

The front fascia of the new X2 is definitely more distinctive than the smaller X1… but that doesn’t necessarily mean it’s better. The dual kidney grilles remain, of course, but instead of a sculpted lower vent surrounded by black plastic (as seen on the X1), BMW designers have decided to fit the X2 with a pronounced, cheap-looking silver plastic finish (at least on this particular trim).

The headlights are larger, and draw similarities to the Euro-only 2-Series Active Tourer, and the same rounded fog lights from the X1 carry over, located just between the headlights and the corner vent. It's safe to say that the new X2's design easily stands out from the SUV crowd.

The BMW X2 is notably more sculpted than the X1, with a sloping rear roofline and slimmer windows. The 10-spoke wheels are similar to the X1, but gain a sharper look. Depending on the trim, the X2 also comes with plenty of added cladding on the door sills and wheel wells, as well as a color-coordinated plastic finish in between. As mentioned, the X2 rides a whole three inches lower than the X1.

The back end of the BMW X2 is arguably its most appealing feature. Slim, sleek-looking taillights pair with a tapered roof and a pronounced rear diffuser. The body of the X1 is taller, and has more cargo space (27.1 cubic feet with the seats up, versus 21.6 in the X2), but the X2 looks more like the sporty SUV it’s intended to be.

Virtually nothing has changed in the cabin during the transition from X1 to X2. Apart from a slimmer, more rounded steering wheel, and new cloth seats, the X2 borrows all the same interior components found in the X1, including the exposed central screen, analog instrument cluster, and the gear shift lever. Some new stitching elements do give the X2 a slightly more distinctive look, but side-by-side it's hard to tell the two interiors apart.

Overall the new BMW X2 isn’t much improved design-wise over the larger X1 – but it remains a unique offering nonetheless. Power comes courtesy of a 2.0-liter four-cylinder engine, which applies a TwinScroll turbocharger to make 228 horsepower (170 kilowatts) with 258 pound-feet (349 Newton-meters) of torque, routed through an eight-speed Steptronic transmission, and connected to BMW’s xDrive all-wheel drive system.

No pricing information has been released just yet, but the new BMW X2 is slated to go on sale next spring.