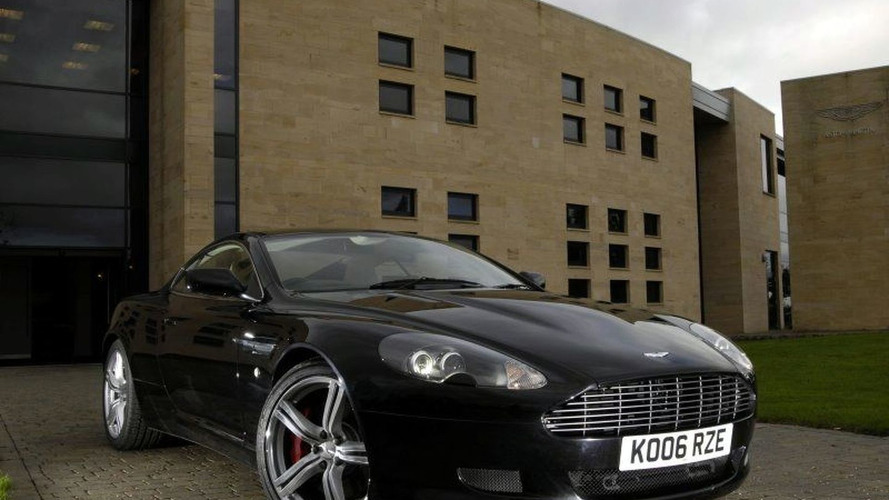 This car is taut, stiff and fun at real world speeds and will now kick against the wheel through low speed bends on a typical broken up backroad. It will spin its wheels from a getaway and feel like a grand occasion every time it leaves the drive.

The original DB9 was a frustrating car, a great engine and seductive design hurt by a recalcitrant automatic gearbox, and soft set-up. It was more than good enough car for most fans of the brand, but everyone knew it could have been sharper and real enthusiasts were left with the choice of the harder, manual AMV8, or the ludicrously expensive Vanquish S and its flappy paddles.

But there was a definite gap in the market for a stronger DB9 with a manual gearbox, and here it is: the DB9 Sports Pack.

The Sports Pack costs just £2495 to the list price, which is nothing in the grand scheme of things, and the manual cuts £3000 off the basic price of admission in the first place. So it’s cheaper than the flabby, semi-automatic DB9, and so, so much better.

It turns a great Grand Tourer into a real sportscar and had Aston Martin made this in the first place, the DB9 might just be hailed as the best car of the Millenium.

That Graziano six-speed comes with an old-school bolt action: it’s stiff, notchy, takes a serious shove and the clutch is similarly meaty, like an Aston Martin should be. That makes blipping the throttle and downshifting a serious business and the DB9 Sports Pack was definitely set-up by a team inspired by the classic race cars of yesteryear.

The only Aston Martin to truly grab me before this day was the razor sharp AMV8, a hard riding sportscar. That’s what the DB9 has now become, a chuckable sportscar with a gigantic V12, and I could have driven it all day every day.

So that’s what we did, to thoroughly evaluate this new icon we went from Aston Martin’s cutting edge new home in Gaydon, Warwickshire, to the place that started it all – Aston Hill. The return route went via the old factory at Newport Pagnell. As it turned out the drive story provided more than a lame hook to hang a story on, it provided one of the most varied and tortuous test route we could ever have come up with.

With 350 miles to cover in one day, much of it on perennially clogged motorways, we would have chance enough to explore the new DB9’s limits on the quiet rural routes on the way.

The Sports Pack provides 6mm shorter springs and while that shouldn’t make a difference, from the outside the DB9 now looks even better as it hunkers down on those new 19” alloys. But this change goes well beyond the visual, the wheels help reduce unsprung weight and the springs have been uprated by 68 percent in front and 64 percent at the rear, too, the Sports Pack makes this a much more serious animal.

There is none of the built-in understeer and lean into the corner that made itself known on every bend in the original DB9. This car cuts into bends and can be pushed into gentle, benign oversteer if you know what you’re doing. A Limited Slip Diff and rock solid suspension means it will slip out of line, but is easily held on a twist of opposite lock. With the original DB9, the pitch and roll meant when the slide came it would be unpredictable and harder to catch, but this car unlocks a whole new world of performance.

Now this comes at a price and the velvet-smooth ride of the old DB9 is a thing of the past. This car shakes and rattles over poor surfaces and is every bit the temperamental sportscar when the road doesn’t suit. The wheel fidgets over major ruts and kicks back round tight corners on British B-Roads long forgotten by the local council repair crew, and it feels great. On a good surface it is precise as a scalpel yet easy to drive, but on the quiet roads this car turns into an animal. It does take driver input, it does take effort and it is tiring over a long haul, but it’s lots more fun.

The final change is a load-bearing aluminium panel that replaces the composite undertray and counters the greater loads fed into the shell by the uprated suspension. That’s how much of an impact the minor changes have on the whole.

They could have tweaked the engine, too, but there was no need. Whip that V12 all the way round to the redline and you’ll meet one of the most seductive sounds in motoring. Aston’s V12 may once have been two Ford Mondeos in the dim and distant past, but it’s come a long way since then and ranks amongst the best singing units out there. There’s a haunting background wail that takes this mechanised meshing of components to a higher level.

To hear it once is to fall in love, and many have returned from an Aston Martin test drive grateful that they’ll only wait a year for our car and have just the summer house money on sheet-metal and leather.

Execute a perfect launch and 60mph comes up in 4.7 sec, but it comes with more wheelspin than the semi-automatic managed, more aggression, more action with the gearbox and clutch. It just has more character. The top speed is an unchanged 186mph, more than enough, but the real joy of this machine doesn’t lie all the way up there.

No, this car is taut, stiff and fun at real world speeds and will now kick against the wheel through low speed bends on a typical broken up backroad. It will spin its wheels from a getaway and feel like a grand occasion every time it leaves the drive. Far from the old man’s Grand Tourer that was the DB9, the Sports Pack changes the whole character of the car and it’s now a real, meaty old school sportscar.

The V8 used to be the choice for enthusiasts. You could have the Supermodel status of the DB9 or the substance of the V8. Now you can have the best of both worlds, and this might just be the best Aston Martin yet.