The standard M4 is more lovable and more livable than its Competition counterpart.

There is no greater statement-making vehicle than a performance car. Automakers know this, and that's led to an arms race both for authentic sportiness and the perception thereof. Where 40 years ago, a sports car was, broadly speaking, a faster, more agile version of a normal car, today's performance vehicles need more.

The advent of in-car technology has opened a Pandora's box and automakers are busy rifling through, sometimes to the owner's benefit and other times because it gives the perception of performance. This theatrical emphasis on speed and agility is fun – we aren't going to sit here and say otherwise – but sometimes, automakers go too far.

The 2021 BMW M4 is a prime example of this. A brilliant, entertaining performance car, especially if you go for the non-Competition model we have here, some questionable decisions around its tech and safety suites feel like performance theater taken too far. Still, there's no question in our mind – the base M4’s lower output, standard manual gearbox, and robust active safety suite make it the one to have.

So, the grilles. There's no shortage of ink across the internet about how questionable BMW's latest design fad is, but we're here to say that they are slightly less bad on the M4 than on the standard 4 Series. BMW's decision to give the M cars horizontal slats instead of the fussier design found on the non-M products is a smart one, reducing the busy look at the front of the car. The rest of the M4's design is pretty typical by M standards.

After a week with the M4, we strongly advise against going for a black or gray interior. Our Yas Marina Blue/Black combo with yellow accents rocks. It's such a wild and out-of-character choice for a German automaker, but the scheme provides a huge splash of color that overshadows some of the interior's drearier bits, like the trim on the dash and center console.

Beyond the upholstery, the M-specific controls on the center console, the M-branded steering wheel, and the gorgeous carbon-backed bucket seats, though, this is the same 4 Series cabin. It's fine – nothing to write home about. Black is the predominant material, and where there isn't leather, there's soft-touch plastic that feels appropriate for a model line that starts at around $40,000. 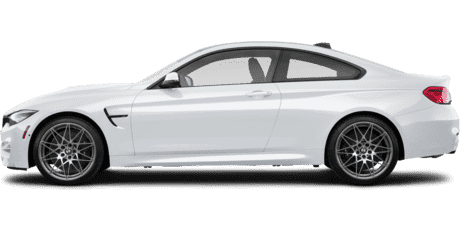 Now, those carbon-fiber-backed bucket seats. They are, bar none, the best factory performance seats in the business, beating out the stuff from Porsche, Mercedes-Benz, Ferrari, or Lamborghini. They're a pricey option at $3,800, but frankly, BMW could charge double that and we'd pay up with a smile on our face.

What makes them good? It starts when you open the doors and see all the glossy carbon-fiber accents and the way the designers splattered color and contrast across the chairs. Yes, beyond being very good performance seats, they look like works of art, too. That's especially true in Yas Marina Blue (although we'd love to see them in Kyalami Orange).

Slipping over the firm, deep outside bolster is like getting into a race seat, but once ensconced, the side bolsters and an elevated center section of carbon fiber keep your legs in place perfectly. The sizable seatback bolsters are adjustable too, so they can accommodate a range of body types despite their racy focus.

While Senior Editor Jeff Perez took issue with the M3 Competition's crashy ride during his test in Florida, our M4 felt more composed on Michigan's roads. That's despite its optional tires, which match the staggered setup the Competition model offers as standard. With the adaptive dampers in their softest setting, the M4 reacted well to the wide array of broken pavement and expansion joints metro Detroit offers. Even in the firmer setting, though, the M4's ride was surprisingly compliant, soaking up abuse with little disruption to the driving experience.

Like every other BMW, the iDrive operating system is the command center for the car's various gizmos and gadgets. The M4 doesn't break new ground here, retaining the iDrive 7.0 software found in other 4 Series models, which remains easy to navigate, responsive to inputs – be they through the vestigial control knob or the 10.3-inch touchscreen – and plenty attractive. Wireless CarPlay is standard, and while we've had issues with connectivity in other BMWs, it worked flawlessly in this M4.

By and large, the M4's tech suite retains what works from the 4-Series and then adds a whole bunch of stuff that, on paper, sounds cool. In reality, the controls for the car's various drive modes and software sets are cumbersome at best and little more than performance theater at worst.

Instead of drive modes that adjust the engine, exhaust note, suspension firmness, steering, stability control, transmission behavior, and diff setup (where applicable) together, BMW ditched the usual Sport, Eco, and Sport Plus presets. Owners need to select the setting for each individual system, which they can then program to one of the two M buttons on the steering wheel.

The quick-access nature of the buttons is truly great, but the old presets weren't hurting anyone. Instead of just cycling through all-encompassing changes, you now need to make several different inputs to get the car where you want it each time you startup (unless you program an M button).

More bizarre is the so-called M Mode button, which as far as we could tell exists only to quickly deactivate active safety systems and give you a sportier layout for the 12.3-inch digital instrument cluster. The default Road setting leaves all the systems on. Tap the button again and the car switches to Sport, preventing steering or brake intervention. Hold the M Mode button and eventually the touchscreen will ask you to confirm that you want Track mode, which shuts off all active safety, along with the touchscreen and any audio that may be playing.

Subtract the finicky tech and the M4 is a divine driver's car. The only thing that held it back from scoring a 10 is that our non-Competition model packs 473 horsepower and 406 pound-feet to the Competition's 503 ponies and 479 lb-ft. The non-S Mercedes-AMG C63 Coupe has 469 hp and 479 lb-ft. Even the (relatively) underpowered Audi RS5 offsets its disappointing 444 hp with 442 lb-ft.

Objectively, the M4's torque output is disappointing. But we'd live with it all day long. For a start, peak twist is available from 2,650 rpm to 6,130 (the Competition's peak is from 2,750 to 5,500). The reduced torque paired with the need to wind the engine out further reminds us more of the old naturally aspirated BMW M products, which required a little more thought on the driver's part. BMW quotes a 4.1-second sprint to 60, just three tenths off the torquier, more powerful, auto-only M4 Competition.

Speaking of that six-speed manual transmission, it’s the only gearbox available on the non-Competition model. We'd forgotten how good a pairing a manual gearbox and a straight-six engine are, but the M4 did a fine job of reminding us. The throws on the stubby gear lever are just short enough and each gate has a satisfying notchiness that makes changing up and down enjoyable. It's not some buttery smooth experience, like a Honda Civic Type R, but that kind of contributes to the anachronistic feeling of using the lone manual gearbox in a class that has gone down the two-pedal route and never looked back.

That you give up very little in the cornering department doesn't hurt matters. The steering is fast, but we didn't notice any of the frantic manners that marred our time with the M3 Competition.

Likewise, the handling is solidly on the stiff side of the spectrum, so we programmed our M1 button for the Sport setting rather than Sport Plus, which provided enough firmness while still retaining the compliance we needed for Michigan's lousy roads. The middle setting was better able to cope with mid-corner imperfections – where we'd adjust our line in a corner to avoid bumps and account for Sport Plus' lack of compliance, Sport was the route to the most impressive handling on imperfect surfaces.

Perhaps the surprise of our week with the M4 was its optional carbon-ceramic brake package. A pricey upgrade at $8,150, we typically recommend all but the most hardcore track rats pass on ceramics because they squeal at every stoplight and the pedal is grabbier and more difficult around town. However, the M4's optional brakes had perfect manners while commuting. We wish all carbon-ceramic stoppers were so livable.

Adding yet another check in the standard M4's box is the fact that the whole Active Driving Assistant Pro, one of the best driver aids on the market, comes standard on the cheaper M4 while it’s a $1,700 option on the Competition. This car is unquestionably a better choice for a long-distance journey than the Competition model, integrating full-speed adaptive cruise control and lane-keeping assist with steering assistance in a manner that dramatically reduces the driver's burden on long highway journeys. With these systems engaged, the M4 is as easy to deal with on the freeway as any 5-Series or 7-Series.

The M4's middling output results in worst-in-class fuel economy, although only just. The EPA rates this 473-hp coupe at 16 miles per gallon city, 23 highway, and 19 combined. Both the RS5 and C63 (non-S) improve on that – the Audi nets 18 city, 25 highway, and 20 combined, while the Mercedes earns 17 city, 26 highway, and 20 combined. The Lexus RC F and its 5.0-liter V8, meanwhile, nearly match the M4 at 16 city and 19 combined, but its 24-mpg highway figure leaves the M4 sitting at the bottom of the barrel. Our real-world testing showed a computer-indicated figure of around 18 mpg in the M4.

Then again, fuel economy probably isn't a big concern for shoppers in this segment. We'd wager that neither is the M4's need for premium fuel (which it shares with the competition).

The 2021 BMW M4 starts at $72,795 (including a $995 destination charge). That's $2,900 less than the M4 Competition, which forces owners into an automatic transmission and requires them to pay extra for the class-leading active safety gear. Sure, you'll lose some horsepower and a whole bunch of torque, but there's little question in our mind that the non-Competition driver will come out ahead everywhere but the drag strip.

While our tester adds $21,000 in options to get to its $93,795 as-tested price, the only item we’d really struggle to pass on are the $3,800 seats. The $8,150 carbon-ceramic brakes are great, but they add way too much to the price while returning too little unless you’re tracking the car regularly. Ditto the $2,500 M Driver’s package, which removes the top speed limiter and includes a day of high-performance driver training.

Relative to its rivals, the M4 is on even footing. The aging Mercedes-AMG C63 is more affordable at $71,700 (including $1,095 destination charge), but the entire C-Class range is due for replacement. The Audi RS5 is a compelling option, even though it starts at $76,145. But while we like the styling of the Audi more, there's little arguing that the M4 and its standard manual gearbox and rear-wheel drive will make for a more exciting driving experience.