The Lexus RC F isn't perfect. A laggy transmission, tons of understeer, and a curb weight that rivals some full-size sedans make it not as alluring in a class that includes very good alternatives like the BMW M4, Mercedes-AMG C63 Coupe, and Audi RS5. But, look at the silver lining: the RC F is one of the only remaining options with a V8, where many of its rivals have turned to turbocharged six-cylinders. It's absurdly comfortable, too, with one of the nicest interiors you'll find anywhere. And for 2020, in an effort to address some of those issues, Lexus went all-out and created an RC F designed exclusively for the track… or so it wants us to think.

The Lexus RC F Track Edition, as its name implies, is a lighter, more aerodynamic riff on the same RC F that's been around since 2016 (albeit, sporting the 2020 facelift). It certainly looks wilder, and engineers promote minor tweaks to things like the throttle mapping and revisions to the transmission. But after a week with it, the RC F Track Edition still feels like the same old RC F, if only slightly better and much wilder to look at.

The Lexus RC F Track Edition looks like a freakin’ Hot Wheels car. Swapping sheet metal for carbon fiber on the hood, roof, and front splitter, and tacking on a tacky Fast-And-Furious-esque rear wing mean this car draws attention everywhere it goes. It also gets a trim-exclusive Matte Nebula Gray finish that’s extremely hard to keep clean. But we sort of like how insane it looks – and that ridiculous bodywork is good for more than just showing off at gas stations.

All that exposed carbon (plus lightweight wheels and carbon-ceramic brakes) drop the Track Edition's mass by 121 pounds over the lightest 2020 RC F, bringing its total curb weight to 3,781 pounds. That makes the Track Edition sort of lightweight by Lexus standards, but still pretty hefty comparatively: the BMW M4 CS weighs 3,620 pounds, and even the Ford Mustang Shelby GT350 is lighter at 3,760 pounds.

Visual differences between the RC F and Track Edition are less obvious on the inside. There’s nothing shouty, aside from a red carbon-fiber weave on the door panels, that indicates the RC F’s new hot persona. Lexus's updated interior carries over almost entirely untouched.

We’re not complaining, though, because the RC F probably has one of the nicest (albeit most dated) interiors in the class. The Track Edition's red leather seats with red Alcantara inserts are sublime; they're the softest and most cushioning anywhere in the segment, but still offer fantastic bolstering. The dash gets a simpler black leather finish, as does 90 percent of the steering wheel (there's a tiny red trim piece at the bottom), and all the materials are of the highest quality.

There is one major knock against the RC F, though: Lexus’ dreaded trackpad. The touch-capacitive infotainment controller is frustrating and difficult to use. It's either unresponsive to scrolling inputs or too responsive. At least the Track Edition packs the RC F's optional 10.3-inch display with Apple CarPlay connectivity. But there's still no Android Auto. 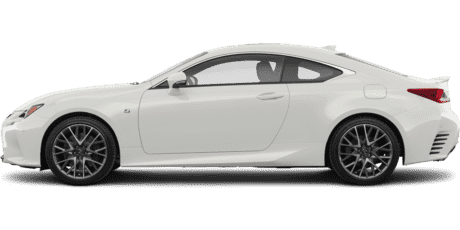 While the Track Edition certainly looks faster, it’s not. The same 472-horsepower 5.0-liter V8 from the base RC F carries over. Power now peaks at just 2,800 RPM (versus 3,600 RPM), at least, and that number represents a noticeable improvement over the pre-facelift model’s 467 horses. But the Track Edition still shaves just 0.2 second off the standard RC F’s zero-to-60 time. With launch control activated, the Track Edition will get there in under four seconds.

It’s not blistering fast for the segment, but this RC F is certainly quick. It moves with more urgency in a straight line than its base counterpart ever did (credit the improved final drive ratio: 3.13 versus 2.97). The eight-speed automatic is faster to upshift – though, still a bit sluggish on the downshift – and the ridiculous roar from the 5.0-liter V8 sounds even better routed through a titanium exhaust. Much of that noise is still artificial, though, funneled through the in-car speakers.

The Track Edition's slightly stiffer chassis and standard limited-slip differential makes for rather effortless rotation; the hefty Lexus turns in with poise, shedding some of the understeer that plagues the base model. The upgraded steering rack is both quicker and more responsive than any RC F setup before it, and while the Michelin Pilot 4S tires carried over from the base RC F are fine, stickier Sport Cup 2s might be better for a vehicle touting track prowess. This Lexus does get loose.

But, we spent all of our time with the RC F Track Edition (ironically) on the road, so there was no opportunity to really judge this car as intended, on the track. While it certainly gains something in the way of performance, the Track Edition doesn't lose any of the charm that makes the traditional RC F such a good daily driver. This car is still really comfortable, extremely quiet, and in Eco and Normal driving roads, no more aggressive than a normal RC F. Don't let its shouty exterior fool you, the RC F Track Edition is a great daily driver (then again, so is the normal car).

There's a lot we like about the Lexus RC F Track Edition: it's a touch sportier than the base RC F, yet still quiet and comfortable, and looks like every kid's dream car. But, swallowing a $96,650 asking price for a vehicle that's no more powerful, only slightly lighter, and still as dated as the $65,000 coupe on which it's based is a challenge. It’s also worth mentioning that the achingly beautiful LC 500 exists for $5,000 less.

Lexus touts exclusivity; only about 50 Track Editions will come to the U.S. Still, the Audi RS5 Coupe costs $74,200, the Mercedes-AMG C63 S Coupe costs $78,495, and BMW M4 CS costs $103,100. So the RC F Track Edition is near the top of the spectrum within the class, and it’s far from the most capable. But if you have a strong affinity for the RC F and want a vehicle with respectable performance chops, this is it.