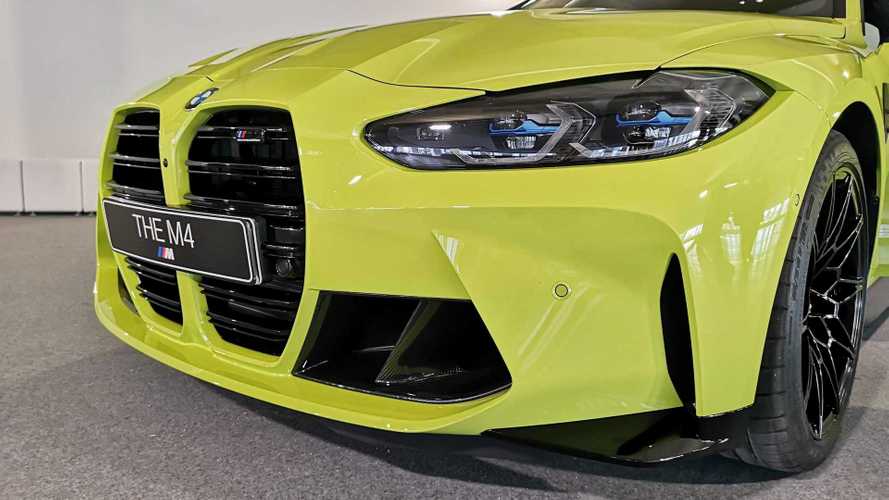 After an unveiling just weeks ago, we got to see the M4 Coupe and Series 4 Cabriolet!

Motor1.com's edition in France thought they were just going to be checking out the new BMW 4 Series Coupe. They did that all day long, going from being behind the wheel of a 184-hp 420i to the 374-hp M440i xDrive (test drive report coming soon). What the team didn't know was that when they returned to the new BMW Group France HQ in Montigny-le-Bretonneux, there was a small surprise awaited us.

Two surprises actually, since in front of them there was in an empty parking lot, a Series 4 Coupe that they had already driven that day, and two tarp-covered mystery cars. The vehicle on the left clearly had the lines of a convertible, and the one on the right was obviously a coupe. It was not difficult to have an idea of what was reserved for us...

The Motor1.com team wasn't mistaken. In front of them, there was the new 4 Series Cabriolet just 15 days after BMW officially debuted it. While the car was on display to the public at Auto China 2020 in Beijing in September, this was the first time these folks from the French crew had seen the soft-top convertible in the real world.

Technically, this is the first BMW 4 Series to use a fabric roof, but this is an argument of semantics. When BMW changed its naming scheme, the 3 Series Coupe and Cabriolet took on the 4 Series moniker. The E30, E36, and E46 generations of the 3er droptop had a soft top. The E90 model was the first to adopt folding metal panels.

The 4 Series Cabriolet looked attractive when seeing it for the first time. When the top is down, the vehicle's profile features a flat body line that runs all the way to the rear.

The BMW 4 Series Cabriolet will hit the roads in the US in March 2021 for the rear-wheel-drive variant and July 2021 for all-wheel drive.

Under the other tarp, the new BMW M4 Competition Coupe was waiting for the French team. This was also a rather exclusive look because the model only debuted on September 22 – along with the M3 sedan. It was also the crew's first time seeing the 503-horsepower (375-kilowatt), and they were able to notice some things that aren't immediately obvious in photographs.

Starting with the grille with the two massive kidneys what really stands out is that the M4 has no trim around these openings like on the standard 4 Series. It visually marks the difference between the brand's luxurious side or the sporty side.

Also, the grille's horizontal slats surprised the team. BMW usually uses vertical uprights in this area. The new layout makes it possible to see portions of the radiators behind the crosspieces.

Get All The Details About These Two:

The vehicle on display here is the BMW M4 Competition xDrive that wears a Sao Paulo Yellow body, which is a €1,140 option in Europe. It also has the M Track Performance Pack that runs €16,500 and includes:

Finally, the M Carbon bucket seats earned a special mention because they left the French team dubious when looking at photos. In real life these chairs are incredible to look at, between the cut-out, carbon shell at the rear, and the daring mix of colors,