Cold and ice are snow match for the 911 Turbo.

February in Michigan is cold. Very cold. It is not a place for sports cars, let alone 572-horsepower, rear-engine rocket ships. And yet that's what I'm driving – blasting, really – down a slush-covered portion of my favorite on-road evaluation loop, unconcerned about the 17-degree temperatures and the lousy roads.

The Porsche 911 Turbo has long been the king of all-weather sports cars, pairing exceptional performance with the surefootedness of all-wheel drive, and that's not set to change with the 2021 model year. But for the latest generation, dubbed 992, Porsche has upped the ante, matching the output of last year's 911 Turbo S and adding a sport-tuned version of Porsche Active Suspension Management for the first time. Combine that with our tester's Goodyear Ultragrip Performance winter rubber and the Wet driving mode that premiered a few years back on the Carrera S, and the result is an almost infallible winter companion.

You might have read that intro and thought, “Isn't the Carrera 4S a similarly competent winter car that costs a whole lot less?” Yes, but the Turbo line distinguishes itself in a few important ways beyond the headline-grabbing increase in output. The most important is its tweaked all-wheel drive system, which features a reinforced front differential that can handle up to 368 lb-ft of torque, up 39 lb-ft from the C4S (fun fact: the all-wheel-drive Carrera shares its front axle drive with the last-gen Turbo).

Beyond that, you'll find a much wider rear track – 63.0 inches, up from 61.2 in the C4S – and meatier tires, with 255/35/20s in front and fat 315/30/21 rears as standard. But ordering a winter tire in that rear size is, to put it mildly, a challenge. Instead, our tester's tires are four-tenths of an inch skinnier at all four corners, matching the last 911 Turbo's standard sizes but theoretically improving performance in the cold. Finally, rear-axle steering is now standard on the 992 Turbo.

The Turbo line distinguishes itself in a few important ways beyond the headline-grabbing increase in output.

All of this means that be it in wet or dry, hot or cold, the new 911 Turbo is better able to exploit its prodigious output. Porsche bored-out the 911’s standard twin-turbocharged 3.0-liter flat-six to 3.7 liters (Porsche calls it a 3.8-liter engine, but the actual displacement is 3,745 cc) and introduced a number of mechanical changes.

Output climbs to 572 hp and 553 pound-feet of torque, which is up 129 hp and 163 lb-ft over the current Carrera 4S and easily bests the 523 hp and 486 lb-ft of last year’s Turbo. Unsurprisingly, this Porsche's straight-line performance is staggering. The sprint to 60 miles per hour takes a blink-and-you'll-miss-it 2.7 seconds with the help of launch control, while the quarter mile happens in a Dominic Toretto–approved 10.8 seconds.

The 911 Turbo's lack of an available manual gearbox may be a demerit, but in terms of absolute performance, the standard eight-speed dual-clutch makes far more sense. This unit is lickety-split quick changing gears up or down – select Sport Plus for the sharpest behavior and tap the M button behind the shaver-like gear lever for an added dose of fun.

Porsche made a slew of first-time additions for the new 911 Turbo. Beyond the PASM Sport suspension, the 911 Turbo S' Lightweight Design pack shaves 66 pounds from the body with special glass, a carbon -fiber roof, and carbon-fiber seatbacks. An available sport exhaust also lets the 3.7-liter sing a little louder. Sadly, our tester was missing both items. PASM Sport, though, is a star, reducing the ride height by four-tenths of an inch and providing more aggressive behavior from the springs, dampers, sway bars, and rear-axle steering system.

The trek north from my home in suburban Detroit is a messy one. Days before the 911 arrived, Michigan received its first real, substantial winter storm of the year. Eight inches of powder blanketed the region with nightly snowfall adding more to the mix. After brushing off the 911 on a frosty Saturday morning, I set off in search of twisting country lanes.

Main roads were merely wet, thanks to traffic and the abundant application of car-destroying road salt. I select the 911 Turbo's Wet driving mode – one of five options, including Normal, Sport, Sport Plus, and Individual – and relax into the heated 18-way seats. Wet mode is like the polar opposite of Sport Plus, tightening the car's leash to keep it pointed straight.

As a way of keeping your six-figure sports car pointed straight in tricky conditions, Wet mode is a must.

The all-wheel-drive system automatically shunts more power to the front axle, while the rear spoiler moves into its specific Wet setting. The front splitter vanishes, while the car relaxes the throttle response, transmission behavior, and reengages the stability and traction control if they were off.

This all happens behind the scenes though, and rarely does commuting in Wet mode feel like any kind of burden. Apply enough pressure to the gas pedal and you still have 572 hp at your beck and call, the PDK still snaps off upshifts, and the steering and suspension still remain at attention for sudden directional changes. But as a way of keeping your six-figure sports car pointed straight in tricky conditions, Wet mode is a must.

As I reached further north, conditions deteriorated, with forest-lined roads featuring distinct tracks flanked by threatening mounds of slush. Despite these issues, I could still switch the Turbo into Sport Plus for more exuberant cornering – the 911 was unshakably confident here, with the all-wheel-drive system sending power forward well before I realized it's necessary. The steering is light but talkative, the new sport-tuned active suspension feels connected and responsive, and the engine remains a riot.

I spent my drive switching back and forth between Sport Plus and Wet – the former for the curves, the latter for the straights – keeping the Turbo in manual mode the whole way. Porsche's standard eight-speed dual-clutch remains among the best automatic transmissions on the planet, offering up flawless behavior in manual mode. Crisp upshifts pair with hesitation-free downshifts to make managing all the power a joy.

The 911 Turbo takes your breath away with a crush of G forces, the relaxed throttle response belying the urgent way the revs build and the speed climbs.

And that power is, well, effortless. The 911 Turbo is the kind of thing that laughs at speed limits and looks at sprints to 60 with all the predatory lust of a cat spying on a juicy mouse. It takes your breath away with a crush of G forces, the relaxed throttle response belying the urgent way the revs build and the speed climbs. Turbo lag is present, but considering the specific output, the increase in boost from the bigger turbos (19.6 psi max, up from 16.0 in the C4S), and the sheer urgency in how the flat-six revs, you'll struggle to spot it.

This is a fast car, and indulging too deeply in that speed will mean attracting the wrong kind of attention. I avoided any brushes with the law, but it's a testament to the 911 Turbo that this sort of blistering performance is both on offer and so unflinching when it's 17 degrees and the roads are covered in slush. The only thing I'd ask for to make things better is the optional sport exhaust. The standard setup is fine – you hear the backing track of the larger turbochargers more here than in a C4S – and the more restrained sound makes the Turbo feel a touch more luxurious, but 572 hp deserves a voice to match. 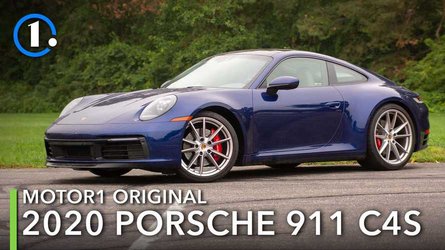 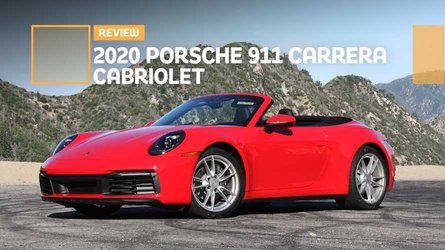 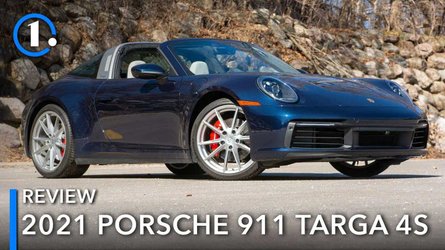 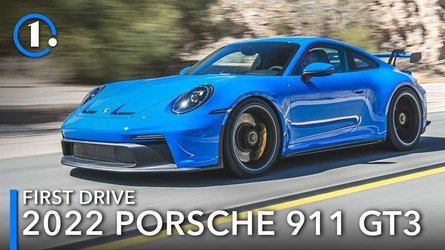 Power, Price, And Grip: You Can Choose Two

There are but two things I'd change on the 911 Turbo. Specifically in the case of this tester, I'd drop the Goodyear Ultragrip Performance rubber. They handle the low temperatures, wet roads, and doses of slush well enough, but despite their three-peak snow rating, packed snow or deep slush is treacherous.

Responses from the front axle slow, and even light throttle applications cause the traction light to flash angrily as the car tries to step out. I've driven plenty of powerful cars with dedicated winter rubber, and I can't recall one, be it rear or all-wheel drive, that feels as unhappy on the white stuff as this Goodyear-shod 911. While options are few when talking about 305-mm rear tires, I'd look hard at the Michelin Pilot Sport Alpin 5 and Pirelli Winter Sottozero S2 before considering the Goodyear Ultragrips.

This 572-hp 911 will beat nearly anything else on icy roads and it'll do so with the kind of uncommon confidence that's typified the Turbo line for years.

Porsche showed some restraint with our tester, though, so it only costs $180,130, including the $1,350 destination charge and $1,000 gas-guzzler tax. And while I wouldn't usually factor it into the total price, it’s worth noting a staggered set of winter rubber in the 911 Turbo’s size will cost around $2,000.

The poor winter tires are hardly the 911 Turbo's fault, and the price tag is… well it's a thing. But I'm not sure I can think of another sports car I'd want to drive through a Michigan winter. This 572-hp 911 will beat nearly anything else on icy roads and it'll do so with the kind of uncommon confidence that's typified the Turbo line for years.