Softer and more luxurious than the 570S, McLaren’s new GT is still one hell of a supercar.

After conducting many serious and thorough tests and evaluations, I’ve come to the scientific and official-sounding conclusion that the 2017 McLaren 570GT is a really super car. Okay, so what I actually did was spend the past couple of days flinging Mac’s new coupe around the gorgeous volcanic landscape of Tenerife, the largest of Spain’s Canary Islands, but my findings are no less accurate and certain. McLaren may lump its new offering in the Sports Series of cars, and the “GT” on the end may indeed mean “Grand Touring,” but forget about all of that. I promise you, the 570GT is a car worthy of super status.

A cursory glance at the 570GT’s specification reveals it to be a heavier, softer, more expensive version of the fantastic 570S that launched last year. But don’t let those adjectives fool you – this is still a McLaren through and through. Step out of a 650S and into a 570GT and you’ll feel the family resemblance. The company’s road-car DNA is so incredibly well defined that I could likely drive any Sports Series or Super Series product while blindfolded (don’t try this at home!) and recognize it almost immediately as a McLaren. 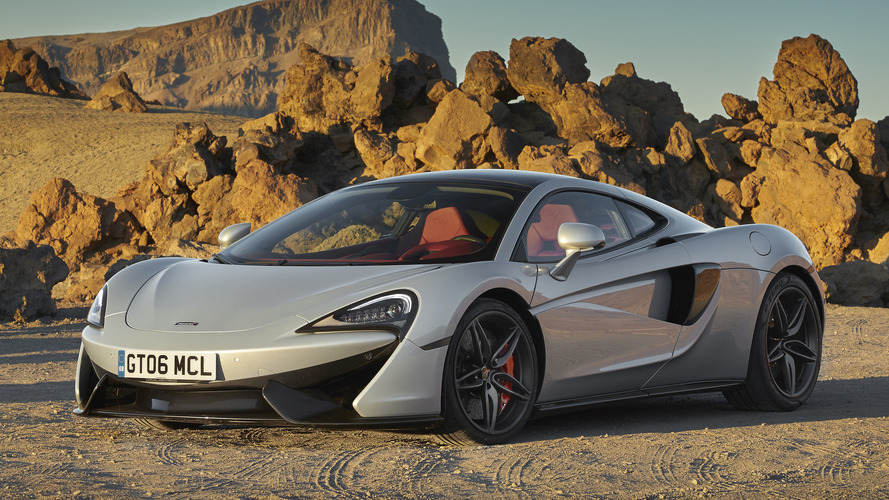 The 570GT has one of the most amicable sports car suspension setups I’ve ever had working under my butt.

There are a couple of tell-tale McLaren traits that work wonderfully here in the 570GT, the first of which is the chassis. The product team calls the GT its “most road-biased car yet,” which is a slick way of saying, “We made the thing softer.” The Sports Series cars don’t use the 650S’ magic-carpet hydraulic-adaptive suspension, instead relying on a double-wishbone setup with independent adaptive dampers at all four corners. Compared to the 570S, the GT’s front and rear spring rates are reduced by 15 and 10 percent, respectively. You’ll notice a slight difference if you drive the two cars back to back in quick succession, but taken on its own, the 570GT has – like the 650S – one of the most amicable sports car suspension setups I’ve ever had working under my butt.

On the motorway circling the southeast perimeter of Tenerife, the Ice Silver coupe coasts over pavement with the sort of solidity and smoothness you’d find in a German luxury sedan. I’m not kidding. I could circle the whole freaking island over and over again with a full McDonald’s coffee in the cup holder, (in a McLaren? The nerve!) and it’d probably never splash over the side. Of course, that’s with the chassis set to Normal mode. Switch to Sport or Track and the car stiffens up a bit, providing more feedback up through the carbon fiber monocoque tub, directly into the seat of your pants. But even in these more aggressive settings, the GT is still impressively compliant over the winding roads of Tenerife’s higher-altitude regions. The coupe glues itself to the road, keeping perfect balance even during fast turns that require a quick mid-corner correction. If you do spill that coffee, fault will lie on the cornering force, not the chassis. 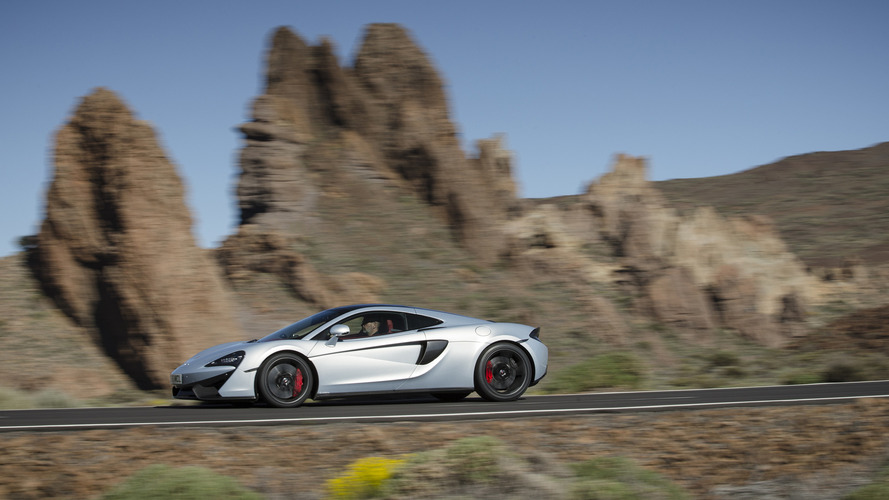 The mix of lightness and accuracy in the 570’s tiller reminds me of the new Mazda MX-5 Miata, that perfect little darling.

The second key McLaren attribute that works hand-in-hand with the superb underpinnings is the ability to change direction with immediacy. Well, it’s not quite as immediate here in the 570GT as it is in the 570S, McLaren having reduced the electro-hydraulic steering system’s ratio by a whole two percent. But that’s a negligible difference. The direct, light steering allows for rapid cornering with little effort, and it all feels very sudden thanks to the low, forward position of the cockpit. This mix of lightness and accuracy in the 570’s tiller reminds me of the new Mazda MX-5 Miata, that perfect little darling. All that directional precision is backed up by the aforementioned harmony of balance and stiffness. Oh yeah, and there’s a huge mass of power pushing you through the bends, as well.

I don’t care if McLaren never makes another engine – the long-serving biturbocharged 3.8-liter V8 is as good a motor as any, and I’ll happily drive it until the end of time. The powerplant is unchanged from the 570S, meaning all 562 horsepower and 443 pound-feet of torque are present and accounted for, routed to the rear wheels via a seven-speed dual-clutch transmission. Thank goodness for those turbos, though – low-end torque is curiously absent, and that’s especially noticeable at the tippy top of Tenerife, some 7,500 feet above sea level. The V8 loses a lot of its natural grunt at this elevation – some 23.5 percent, I’m told – and it’s all up to the big turbos to rocket you forward up the side of Spain’s largest volcanic mound. But with the engine smack behind your head, you’re privy to all the whirring and sucking and blowing (stay focused) of those big turbos, and mixed with the growl from my test car’s optional sport exhaust ($3,940), it makes for an intoxicating blend of aural delights. 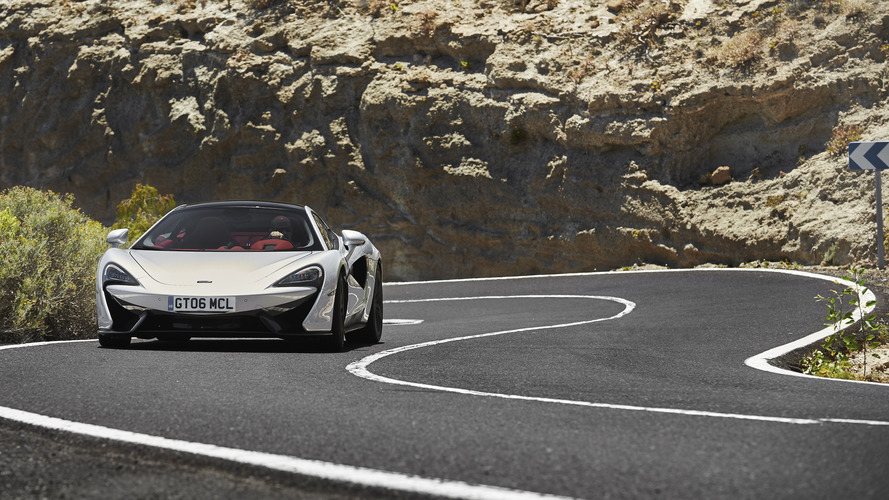 The GT is impressively compliant over the winding roads of Tenerife’s higher-altitude regions.

The GT carries 81 extra pounds of weight compared to the standard 570S (2,976 vs. 2,895), but it doesn’t change much in the way of sheer acceleration or behind-the-wheel satisfaction. McLaren estimates the 0-62 time is two-tenths of a second slower in the 570GT – 3.4 seconds compared to the S’ 3.2 – but that’s like the difference between manual and PDK-equipped Porsche 911 models these days. Both cars will top out at 204 miles per hour, if you’re brave.

One small driving nitpick comes with the 570GT’s brakes. Because this car is designed to be primarily used on the road with maybe a lap or two on the track in its lifetime, the 570S’ standard carbon-ceramic stoppers are jettisoned in favor of iron discs, measuring 14.5 inches in front and 13.7 inches out back, with four-piston calipers all around. I'm sure these stoppers will be just fine for the majority of use, but they lack the immediacy and sure-footedness of the ceramic setup. Of course, McLaren will happily refit the 570S' fancier brakes to your GT for $8,850, and what the hell, throw in an extra $1,090 for special colored calipers. Problem solved; thanks, money.

Speaking of money, let’s discuss exactly what you get for the added premium of this new coupe. A 570S starts at $184,900, and $198,950 gets you into the more functional GT. The pièce de résistance is, of course, the leather-lined “touring deck” that provides an extra 7.8 cubic feet of storage space behind the rear seats (the front trunk – err, frunk – has the same 5.3 cubic feet of cargo volume as the 570S). Pushing a button on the key fob unlatches one side of the glass, carbon fiber-framed hatch, providing curbside access to the cargo hold. McLaren even went the extra step to engineer both left- and right-side loading, corresponding with left- and right-hand-drive markets. Smart stuff, though I’ll note getting things in and out of the heavily raked hatch is sort of an awkward affair, unless you’re tall, which I am not. 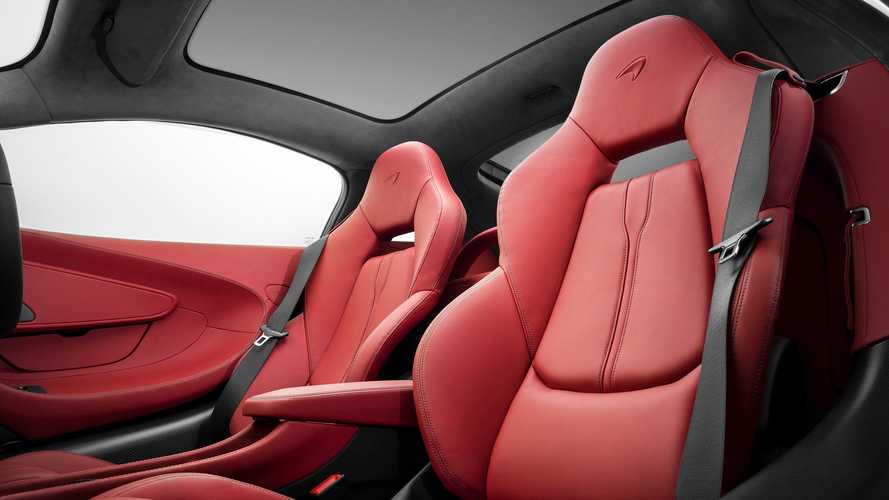 A GT-specific addition is the glass roof panel that, despite its 18-percent tint, will necessitate the use of full-blast air conditioning on a hot Spanish spring day.

Another GT-specific addition is the glass roof panel that, despite its 18-percent tint, will necessitate the use of full-blast air conditioning on a hot Spanish spring day. McLaren says it’s going to offer a retractable sun shade soon, and trust me, you’ll want it. Otherwise, the GT’s interior is basically identical to that of the 570S: heated, Nappa leather seats (with ridiculously unintuitive power controls); a meaty and lightweight steering wheel that’s free of buttons and generous on paddle size; McLaren’s seven-inch IRIS touchscreen infotainment system that works, uh, well enough; and simple controls for handling and power modes. Let’s not forget those panty-dropping dihedral doors, now with three-inch-lower sills than the Super Series cars, so you won’t stumble and look like an idiot during ingress and egress.

Step outside and you’re greeted with exotic style from all angles. The elegantly sloped backside of the 570GT’s cabin bubble looks really great – it’s the most noticeable change to the car’s design in its transition from 570S. The rear deck has an ever-so-slightly elongated lip spoiler to compensate for the aerodynamics lost in killing the S’ flying buttresses over the engine compartment, but looks cohesive and elegant. All in, the 570GT gives off the presence of an true supercar – I know this thing is supposed to compete with the Audi R8s and Porsche 911 Turbos of the world, but neither of those cars will stop people dead in their tracks quite like the McLaren. 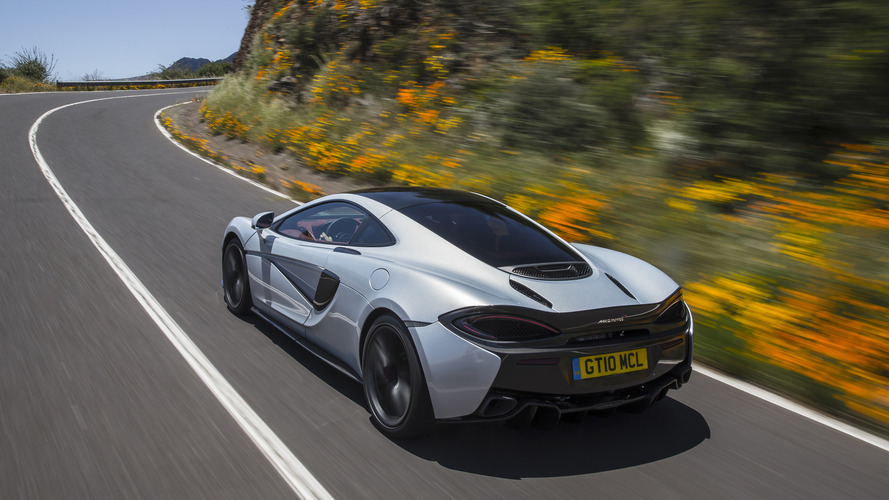 The differences between GT and S are limited to a bit of functionality and a different price point – both have impeccable curb appeal and equally brilliant dynamic prowess.

In the course of just a few quick stops during my Tenerife test, several tourists and construction workers stopped to take pictures of the 570GT, with hundreds more gawkers omnipresent throughout the day. The last time I was driving through the Canary Islands (now there’s a phrase I never thought I’d get to say), I was in a 2017 Porsche 911 Carrera S, and maybe a quarter as many people noticed. Never have I received more thumbs-up, waves, and smiles as I did over the course of two days of driving the 570S and 570GT in Tenerife. Oh, and to the guy so smitten with the bright red 570S he steered his bicycle right into a parked Peugeot, hope you feel better, buddy.

Looks that kill are hugely important for brand recognition, and the 570’s insane style does wonders for convincing people to choose McLaren over Porsche, Audi, Lamborghini, and so on. But once you’ve got their attention, the differences between GT and S are limited to a bit of functionality and a different price point. The new 570GT, like the 570S, has impeccable curb appeal and equally brilliant dynamic prowess. Label it Sport or Grand Tourer – in the end, it doesn’t matter. Drive one, and you’ll see it for the supercar it is.