Audi’s V10-powered halo product remains one of the best supercars around.

It seems rare, these days, to be enamored by an engine. But the 2020 Audi R8’s naturally aspirated 5.2-liter V10 stands out like a fireworks display in the age of fewer cylinders, forced induction, and electrification. It’s full of life, it’s loud, and it’s pretty much the single biggest reason to choose the R8 over anything that it competes with.

But there are plenty of reasons to fall in love with the 2020 Audi R8 Performance. The R8 has been a fan favorite since debuting for 2007 and grew in popularity with the redesign in 2016. Following a 2020 mid-cycle freshening, the R8 remains at the top of its game.

Cruising the streets of pandemic-stricken Miami Beach, the R8 was one of the few things worth photographing, and many passersby seized the opportunity. From behind the wheel, low-speed driving in Comfort is a huge contrast to the R8’s insane capabilities. The seven-speed dual-clutch transmission keeps the revs low, while shifts are almost imperceptible. However, the gearbox’s good manners have a negative effect on the engine’s volume, which requires a good bit of throttle and more revs before it starts to sing.

Opting for the Performance over the standard R8 (a $28,000 increase in base price) brings some additional goodies, further cementing the Audi’s supercar credentials. Output jumps from 562 to 602 horsepower, and torque goes from 406 to 413 pound-feet. And for those of you near a dry lakebed, the top speed increases from 201 to 205 miles per hour. Audi also swaps in 15.0-inch front and 14.0-inch rear ceramic brakes and ditches the adjustable magnetic ride for a fixed suspension. We’ve yet to sample the base model, so it’s hard to say if the cash is worth it. But we’re happy to confirm that the R8 Performance is a real hellraiser.

Through Miami’s horrific potholed roads, the R8 was a total trooper. The fixed suspension isn’t as supple as the Acura NSX’s – our standard for supercar ride quality – but it’s far better than you might expect from a non-adaptive setup.

Grip levels are just about as good as it gets, with beautiful mid-corner balance and flat, stable handling.

Opposite the start-stop button on the steering wheel is the dynamic select controller, which is the quickest way to turn the R8 into a downright troublemaker – the Audi’s character shift from Comfort to Dynamic is palpable. Immediately, the exhaust flaps open up, emitting a stronger, more engaging noise. Give the mid-engine Audi the boot while cruising and the experience becomes equal parts noisy and ferocious.

With the car left to shift on its own, the seven-speed drops several cogs instantly, providing a momentary lapse in acceleration before the engine kicks in and violently propels the car forward. Don’t mistake this for cumbersome shift lag – the effect is similar to that of a rollercoaster tensing up before taking off. It’s wicked fun.

The V10 screams and shouts all the way to 8,500 rpm, with a delicious pickup in pace around six grand. The turboless torque curve is a refreshing change of scenery, reminding you to stay on the go pedal as long as possible for maximum reward. Knock the shifter over to manual mode and the R8 plays along nicely. The dual-clutch box delivers the desired downshift even as the engine reels in the redline. We’d happily trade the small wheel-mounted paddles for the Lamborghini Huracan’s bigger column-mounted set, but the actual shifts are just as crisp in the Audi as they are in its Italian sibling.

When the going gets twisty, the R8 Performance’s Quattro system clings on like it’s glued to the road, with compliments also going to the new-for-2020 Michelin Pilot Sport 4S tires. Grip levels are just about as good as it gets, with beautiful mid-corner balance and flat, stable handling. We’re less enthused by the $1,400 dynamic steering, which is still too vague on driver feedback, even with its variable weighting in different drive modes. For all of Audi’s efforts, it’s the steering that stands out as the low point of the experience.

The aforementioned optional brakes are very easy to modulate and are some of the least grabby carbon stoppers that we’ve ever tested – they’re also very effective in scrubbing huge chunks of speed, and quickly. We’re as happy with the fixed suspension at high speeds as we are with it during regular commuting. With Audi’s everyday driver RS models, we’d prefer the slightly more forgiving magnetic ride over the steel setup, but in the brand’s most aggressive machine the stiffer springs are the best of all worlds.

The Subtle Side Of Super

Even standing still, the R8 has an understated elegance to it that few cars match. The face is more aggressive for 2020, with three vents above the grille, sharper headlight fixtures, and the addition of black trim in place of last year’s chrome grille surround. Flanking the new grille are two triangular design elements in the air intakes that dial up the drama a bit, as does the blacked-out Audi badge, which costs $300.

Our Performance-trim tester wears the specific 20-inch wheels, which Audi mills from a single piece of metal. The two-tone design includes sections of black, helping the blood-red brake calipers stand out even more. Stupid-pretty Kemora Gray metallic paint complements the dramatic alloys – at $595, the new-for-2020 shade is arguable the best color on the palette.

The R8 looks most exotic from the rear quarter angle. Design elements like the signature carbon fiber sideblades, huge oval black exhaust tips (a treatment normally limited to Audi’s RS-badged models), and the trim-specific rear spoiler look incredible but don’t call too much attention to the car. Overall, we’re loving the R8’s look even more now with the updates.

This Car Is FAST: 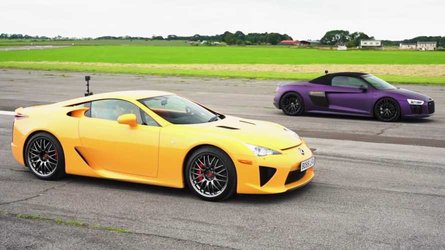 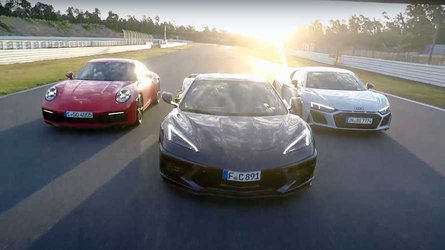 However, we can’t say the same of the cabin, which is slipping away from the standard newer Audis set. Material choice isn’t the problem; this car offers some lovely upgrades like a $5,000 sport seat package, which brings beautiful diamond-stitched leather, 18-way adjustability, and a matching quilted suede headliner. The cabin’s design itself is aging much more rapidly than the exterior, highlighted by the lone Audi Virtual Cockpit display in front of the driver.

Lamborghini upgraded the Huracan Evo with a supplemental center touchscreen to run things like Apple CarPlay, making it more user-friendly. Audi didn’t show the R8 the same love, so you’re stuck with the 12.3-inch digital instrument cluster as the only way of communicating with the vehicle. This means lots of clicking through menus on the steering wheel buttons or asking the passenger to lean over the center console to change the song. Audi’s Virtual Cockpit is still a great piece of tech, but the R8 could use an additional touchscreen for quick inputs.

Getting Better With Age

The 2020 Audi R8 Performance is a phenomenal car, made better by recent updates. Yes, it’s getting older, and at $216,445, this tester is firmly in Porsche 911 Turbo S territory. Compared to brand new alternatives, the R8 is starting to feel old, especially on the inside. Even so, the Audi’s allure permeates as strongly as it ever has, which keeps its case valid against anything of similar price.

Add up all of the good bits – the sleek design, fantastic grip around corners, dramatic acceleration – and the R8 is plenty memorable. Yet, it’s the engine that leaves the biggest impact. Sometimes, all it takes is one special feature to make a car stand out in the mind, and in this case, it’s the truly sensational V10. Supercars will get faster, and they’ll get better to drive too. But a week driving the 2020 Audi R8 Performance is enough to convince us that this car’s engine will forever make it one of the greats.