Bugatti makes a Chiron focused on handling, but gives up little of its blistering performance.

Two seconds. Mash the throttle from normal freeway speeds and that’s all the time it takes for the Bugatti Chiron Pur Sport to reach the sort of pace that will cause an officer of the law in an unmarked patrol car to raise all manner of hell.

And I’d been such a good boy up until that point.

Limited to just 60 units worldwide and commanding a price tag of roughly $3.7 million, the Chiron Pur Sport demands an entirely new level of respect, attention, and care at the helm. So for the first ten minutes of my two hours behind the wheel, I drove like a geriatric headed home for nap time after a bout with a Denny’s Grand Slam breakfast.

But with an 8.0-liter quad-turbocharged W16 engine at the beck and call of my right foot and a stretch of straight, wide-open tarmac laid out in front of me… well, I’m only human.

Miraculously and mercifully, the officer let me go with a stern warning, though he even admitted that he wanted a closer look at the “crazy rocket ship” coming up behind him. Still, it’s a stark reminder that 1,500 horsepower can get you into yelling-over-the-megaphone levels of trouble in bracingly short order. And yet, somehow, straight-line acceleration isn’t even the core mission of the Pur Sport.

Pur As Can Be

While the Chiron was designed to be an all-around stunner and a record-setter for outright speed, the Pur Sport sees the focus shift toward handling and overall agility, going several steps beyond the Divo to create the most track-focused Bugatti hypercar to date.

The visual aggression is noticeably dialed up here, but the external changes are also purposeful, with gaping air intakes on hand to keep the multitude of radiators well-fed and a larger carbon-fiber splitter equipped to increase downforce at the front end. Out back, Bugatti ditched the standard Chiron’s active rear spoiler in favor of a large fixed wing that provides more high-speed stability while also helping shed some weight.

1,500 horsepower can get you into yelling-over-the-megaphone levels of trouble in bracingly short order.

In all, Bugatti says that engineers were able to shave 110 pounds from the car for Pur Sport duty with the optional magnesium wheels – though not equipped on this test car, they would account for 35 pounds of unsprung weight savings all on their own.

While that may not sound transformative for a car that tips the scales at well over two tons, it is an impressive feat given that the original Chiron was already a no-expense-spared engineering task in which lightweight components were selected wherever possible. The interior plays a role as well; stripped down to the bare essentials and swathed in Alcantara, it’s a no-nonsense affair that helps to minimize excess poundage while enhancing the driver’s hold on the controls during high-G lateral maneuvers.

And those maneuvers come by way of some fairly substantial suspension tweaks. Retuned dampers with spring rates that are 65 percent firmer up front and 33 percent in the rear improve body control, while revised geometry now delivers 2.5 degrees of negative camber. Along with harder bushings and a bespoke set of Michelin Pilot Sport Cup 2 R tires – essentially a DOT-legal semi-slick – the Chiron Pur Sport gives up some of its grand touring chops in the name of nimble control and significantly more grip.

While Bugatti ported this engine unchanged from the standard Chiron, engineers bumped up its redlne by 200 revs to 6900 RPM. The seven-speed dual-clutch transmission gets a new gear set as well, with ratios that are 15 percent closer for more urgent response.

In any context outside of Volkswagen’s 5.4-mile-long test track in Ehra-Lessien, Germany, the Pur Sport feels even more visceral than the standard Chiron.

All of this track tuning does come at a cost in another area of performance, though, as the Chiron Pur Sport is electronically capped to a “mere” 217 miles per hour. Although the enhanced aero and close-ratio gearbox are factors, Bugatti says it’s largely the limitations of that sticky track tire that dictated the reduction in terminal velocity.

But in any context outside of Volkswagen’s 5.4-mile-long test track in Ehra-Lessien, Germany, the Pur Sport feels even more visceral than the standard Chiron. After my impromptu chat with Johnny Law, I pointed the nose toward the Angeles National Forest, a network of winding mountain roads just a few miles northeast of downtown Los Angeles, to put the car through its paces.

Acceleration, as you might expect, is comically savage. Although Bugatti cites an essentially flat peak torque curve that’s established at 2000 RPM and continues on all the way to 6000 revs, the boost seems to come on in two distinct stages delivered in short succession. The first stage impresses; the second one stuns.

The Pur Sport features EB, Autobahn, and Handling modes, along with an ESC Sport Plus driving mode which eases up the stability control calibration for some tail wagging if you want it. Bugatti wants to be really sure that you do, though: the first three modes are accessible via a dial on the steering wheel, but Sport Plus requires you to first select Handling mode and then press the ESC switch to the left of the steering column. 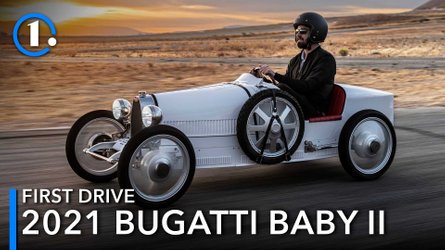 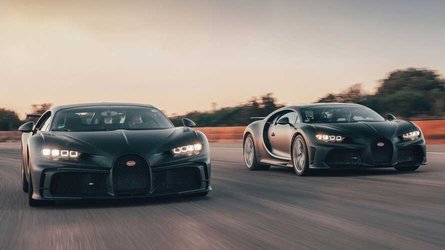 I spent the majority of my time in EB mode, the default setting. Around town it’s noticeably stiffer than the standard Chiron, though not punishingly so. Autobahn is geared more toward high-speed runs, setting the front end down to improve aerodynamic drag, but I’d already seen where those kinds of shenanigans would get me out on the freeway. Handling mode is the most aggressive of the trio, but it dials the dampers in for smooth track surfaces rather than the undulating, broken pavement encountered out on Angeles Crest Highway. Unless you’re on an F1 circuit, even track-tuned cars benefit from some suspension compliance.

Regardless of which drive mode you select, the Pur Sport bites into the corners with much more tenacity than the standard Chiron thanks to the additional negative camber and the grippy Michelin rubber. The beefed up bushings improve steering response, too, and combined with the revised spring rates and retuned dampers, the chassis tweaks make this a legitimately honed tool for corner carving.

Yet despite all the upgrades done in the name of handling, the W16 still steals the show. In line with the weight reduction efforts and Pur Sport’s overall track focus, Bugatti also removed a substantial amount of sound deadening, and that makes the exhaust system and its new, 3D-printed titanium tailpipe effectively louder inside the cabin. It’s a distinct bark that’s V8-esque but somehow more sinister, angrier, and wholly unique to Bugatti in the production car world. And the shove it delivers is outright shocking, every single time.

As I reluctantly made my way back to the drop-off point, I considered the Chiron Pur Sport’s place in the automotive world. Realistically, the level of performance on tap obliterates any notion of regular use on public streets. Not just because of legality concerns, but because roads simply aren’t designed for the kind of pace that this car can carry. Still, at nearly 4,300 pounds, it’s probably not going to set any lap records, either.

Perhaps more than any modern Bugatti before it, the Pur Sport was built to be driven hard so it can reward the driver for their effort.

Instead, the Chiron Pur Sport, like the Chiron and Veyron iterations before it, really exists as an example of what we’re capable of when we target the superlatives. An exercise in envelope-pushing extremes that’s also usable and beautiful to look at. Even traffic cops can’t help but tip their caps (thankfully nothing more, in my case).

With just a few dozen cars to be had at a price tag that would make an oligarch blush, it’s likely that the majority of Pur Sports will live a posh, climate-controlled, low-mileage lives, and that’s kind of a shame. Perhaps more than any modern Bugatti before it, the Pur Sport was built to be driven hard so it can reward the driver for their effort. Here’s hoping that the 16 on each example’s horseshoe center grille – a nod to the brand’s motorsport heritage – gets a chance to see at least a few start/finish lines throughout its days.