A much sharper three-row.

Imma let you finish, but the Acura MDX is the best-selling premium three-row crossover of all time. Granted, the MDX is also one of the oldest premium three-rows in America – arriving stateside in 2001. But that doesn't change the fact the MDX's winning formula has made it a hit among buyers for the past two decades, and that won't change anytime soon.

The 2022 Acura MDX takes the sharp looks, smooth demeanor, and affordable pricing of its predecessor and packages it all a bit better. The new familial face and “Diamond Pentagon” grille marks a huge improvement over its predecessor’s ungainly beak, the sporty A-Spec package (like on our tester) offers more comprehensive upgrades, and the thoroughly modernized interior with the brand's TrueTouchpad interface brings the MDX up to date with its more upscale rivals. This new MDX is a huge improvement.

Acura’s new design language – first seen on the RDX and TLX – fits the larger MDX exceptionally well. Simply put, this is one of the best-looking three-rows on sale today. The bold front end wears the brand’s signature grille and slim LED headlights, while black dot the body courtesy of the stylish A-Spec package (a $3,500 option). The refinished rear sports sleek LED taillights and trapezoidal exhaust tips, and the 20-inch Shark Grey wheels are exclusive to this trim (and probably our favorite of all seven available wheel options).

The interior is eye-catching, too. The A-Spec–exclusive red leather and faux suede black accents make the cabin feel bright and bold, while real brushed aluminum accents dot the door panels. The dash layout is mostly clean – with a long 12.3-inch screen perched atop it. There is a bit of clutter when it comes to things like the climate control buttons and placement of the volume knob, and the piano black trim on the dash isn't our favorite – it attracts fingerprints like a magnet. Other versions of the MDX offer matte wood accents that we'd much prefer. At any rate, the inside of the MDX is still a very nice place to be. 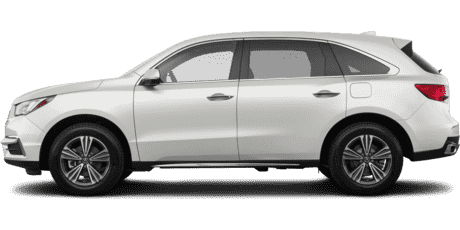 The leather buckets in the MDX are super-cushy, with standard 12-way power adjustability, and the A-Spec package includes both heating and ventilation functions. The front seats aren’t as form-fitting as you might find in alternatives like the Audi Q7 or Cadillac XT6, but their La-Z-Boy qualities make them perfect vessels for toiling away hours of highway driving. The second row isn’t as comfortable comparatively – the bench is a little stiff – but it does transform into two captain's chairs simply by removing the middle seating position.

This new MDX is slightly longer than its predecessor, with 139.1 cubic feet of total passenger volume – 6.4 more cubes than the previous model. And this crossover does feel spacious and airy in the first row, affording driver and passenger a solid 38.5 inches of front headroom and 41.6 inches of front legroom. Those aren't best-in-class figures for headroom, to be fair – the Infiniti QX60 (40.7 inches), Audi Q7 (39.9 inches), and even the Cadillac XT6 (39.8 inches) are slightly better in that respect – but the MDX's legroom figure is better than Cadillac's and equal to Audi's.

The second row feels a bit tighter, though not offensively so. But the MDX's 38.1 inches of headroom and 38.5 inches of legroom are on the lower end for the class. Access to the third row is relatively easy at least, even with the second-row bench in place. A one-touch button folds the seat forward, opening up a narrow entryway for access to the rearmost row. And once there, the third row offers a modest 36.2 inches of headroom and 29.1 inches of legroom – decent, if not slightly below-average figures for the class. But like many mid-size crossovers with a third row, this isn't a place you want to put average-sized adults over long distances.

Behind the MDX's third row is 16.3 cubic feet of cargo space, an improvement of 1.5 cubes over the previous model, or 18.1 cubes with the reconfigurable cargo floor in its lowest position. With the third row folded flat, the MDX has 39.1 cubic feet, and with all seats flat, the Acura offers 71.4 cubes. That's better than what you get on the Q7, but down slightly on the QX60 and XT6.

When it comes to tech, the MDX's tech is that TrueTouchpad interface is the star. A carryover from the RDX and TLX, placing your finger in a specific location on the square infotainment touchpad controller highlights a corresponding selection on the 12.3-inch screen. If an icon is in the top right of the screen, for example, simply place your finger on the top right of the touchpad controller to activate it. The setup certainly takes some time to get used to, but once you figure it out, it's one of the better options out there currently.

Unfortunately, while wireless Apple CarPlay and Android Auto come standard – and connect faultlessly – the same touchpad functionality doesn't carry over. No longer can you select an option by simply placing your finger in the same position as the option on the screen. Instead, you now have to use the touchpad as you might the trackpad on your laptop, which makes it more difficult while driving. This isn't an Acura problem so much as it is an Apple or Android issue, but it is somewhat frustrating. A normal touchscreen would be easier to use.

That said, the finicky smartphone interface is really the only issue we have with the whole setup. The $4,700 Technology package (standard on the A-Spec) adds advanced features like ambient lighting, Wi-Fi connectivity, navigation with a 3D view, CabinTalk – which projects the driver's voice into the third row – and an ELS Studio 3D Premium 16-speaker sound system that's one of the best in the business.

To be honest, the MDX isn't our favorite three-row to fling into a corner. The Super Handling All-Wheel-Drive system (standard on the A-Spec) gives the crossover solid grip and good torque vectoring – able to send up to 70 percent of power to the rear axle – plus it helps eliminate understeer. But only when you really push it, be it on a highway onramp or canyon road, does the SH-AWD system feel like it's doing any work.

Body roll in the MDX is still very noticeable, more so than what you might find on alternatives like the Q7 and XT6. We should note that both of those models have available active anti-roll bars whereas the MDX doesn’t (at least, not yet). And the Acura’s steering is way too overboosted and lightweight, even in Sport mode.

The 3.5-liter V6 is a fine unit. It carries over from last year unchanged, capable of 290 horsepower and 267 pound-feet, but now the engine gets a quicker, crisper 10-speed automatic that we quite like. The 10-speed clicks through gears quickly and without hesitation. But the MDX isn't our definition of fast; the 4,534-pound crossover takes some time getting off the line and up to speed. Also, the throttle response is way delayed – it takes a second for the engine to respond when you put your foot down.

The luxury brand’s advanced AcuraWatch safety suite comes standard across the board. Every version of the 2022 MDX gets a forward-collision warning, automatic emergency braking with pedestrian detection, lane departure warning, lane-keep assist, adaptive cruise control with stop and go, blind-spot monitoring, rear cross-traffic alert, and road-sign recognition. This is one of the few three-rows in the class to offer all of that equipment at no extra cost.

During our test, all of Acura’s active safety features worked well on the road. Adaptive cruise control with an adjustable distance indicator does a great job of monitoring vehicles ahead of it and adjusting speed accordingly. Braking is smooth, too, all the way down to zero mph. And the lane-centering tech does a great job of keeping the MDX perfectly centered in the lane.

The only thing we’d note is that adaptive cruise with steering assist, when active, gives off a “steering input needed” warning too often when hands are in fact on the wheel. If forces you to wiggle the steering aggressively so that it knows you’re not entirely hands-off. Also, the system does get confused at intersections – offering steering inputs when it shouldn’t – but that’s not a problem that’s exclusive to the MDX.

The Acura MDX with SH-AWD achieves 19 miles per gallon city, 25 highway, and 21 combined, which are solid figures for the class. The all-wheel-drive Infiniti QX60 is more efficient, returning 22 mpg combined, as is the XC90 at 23 combined. The Acura matches the Audi Q7 (21 combined) and beats the Cadillac XT6 (20 combined), which puts the MDX at the upper end of the spectrum.

Even with that increase, the MDX with the A-Spec package is well-priced, all things considered. The QX60 is still the budget-minded option of the bunch, with none of its trims hitting $50,000 to start. But an equivalent Q7 Premium Plus with all-wheel drive comes in at $57,200 and an XT6 Sport with all-wheel drive costs $58,190 before options.