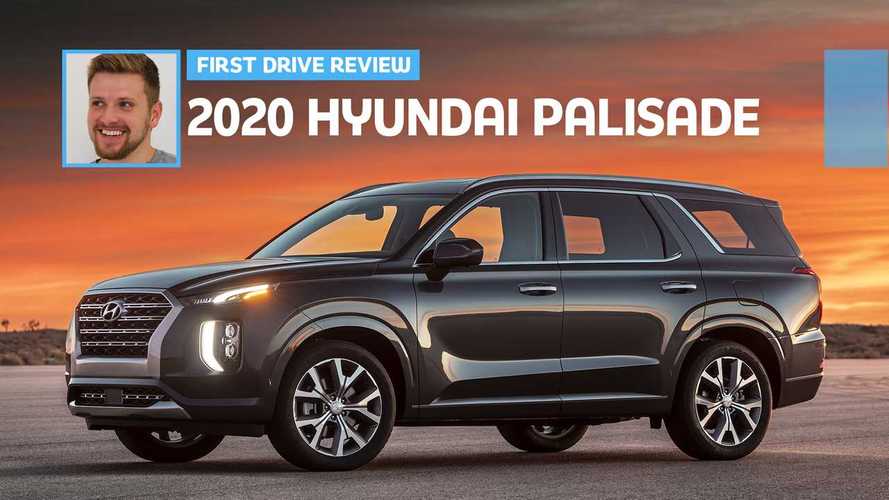 Looking for a luxurious three-row crossover SUV? You might want to seek out a second mortgage while you’re at it. Many high-end manufacturers ask more than $70,000 for their most basic options. But you shouldn’t spend big dollars on a luxury-badged crossover based solely on brand power. At the very least, you should also check out more mainstream options like the new Hyundai Palisade, which is a competent, comfortable, near-lux three-row that won't break the bank.

Sure, the Palisade isn't what we'd call “conventionally attractive,” but at a minimum, Hyundai deserves credit for taking a risk. The Palisade looks unique, and it’s almost pretty in the top-tier Limited trim. Almost. Overlook the oddly shaped, thickly framed cascading grille – the only feature we're not totally fond of – and you’ll see the Palisade has more appealing angles.

The slim upper LEDs, which act as both running lights and turn signals, give way to square lower lightboxes (dubbed “Crocodile Eyes” by designers). The combination looks aggressive. Separated by a thin piece of the front body panel, the two housings interlock via an LED running light that extends from the right-hand corner of the upper housing into the left side of the larger, lower box. The headlights, like those in the Kia Soul, make up the lower portion of the fixture, oddly enough.

The floating roof accent, while not itself uncommon, looks exceptionally stylish here and helps the side profile stand out. The inclusion of additional glass visually expands the rear greenhouse from the exterior, making the Palisade look airier. A silver trim piece wraps around the front two side windows, sinking into the sheet metal just shy of the third row, and accents the front two windows.

We appreciate the Palisade's unconventional exterior, but we like Hyundai's conventional cabin styling more. The long, vertical dash flows neatly across the front of the vehicle. Lined by high-quality materials like matte-finished wood, soft leather, and some shiny plastic, the top-trim Palisade Limited (with all the options) feels like an entry-level luxury vehicle, even though it wears a Hyundai badge.

The silver-painted center console, littered with dials, switches, and an unnecessarily convoluted button-operated gear selector, separates the two front leather seats down the center. Lift the lid of the storage compartment, located behind the shifter, and it hides a space large enough for cell phones and keys, not to mention a Qi wireless charging tray and a USB port. Open the larger center console and there's more room still. The deep tub (also equipped with a USB port) might be large enough to hold an iPad Mini. The Palisade has impressive organizational skills.

The Palisade has impressive organizational skills.

Opt for the eight-way adjustable quilted Nappa leather seats on the Limited model (the less-expensive leather on SE and SEL trims isn't as nice). You'll thank us. These units look superb in the bright white cowhide and are extremely comfortable. The third row is tight, but it’s more usable than most in this segment thanks in part to the Palisade's 196.1-inch length (a three-inch increase over the outgoing Santa Fe XL). The rear bench isn’t pinned to the floor, the large rear window reduces feelings of claustrophobia, and with a USB port and cupholder on either side, it’s a perfectly fine seating option in a pinch.

Motivated by a 3.8-liter V6 engine producing 291 horsepower and 262 pound-feet of torque, the Palisade has power. On the steep mountain roads of northern Idaho, it offered enough oomph to move the 4,300-pound crossover uphill without a struggle. The automatic gearbox ticks through its eight gears decisively, while the optional HTRAC all-wheel-drive system provides tons of grip on the pavement (and the dirt, too, as we found out).

Compared to its Kia Telluride cousin, the Palisade’s ride is better tuned, and thus more refined, resulting in a bit less body roll. The Palisade also has better steering feel due to its weightier tiller, which, inspires more confidence in the corners. And even while riding on optional 20-inch wheels (18-inch wheels are standard), the Palisade's suspension is absorbent, soaking up rocky roads with relative ease.

Similar to the outgoing Santa Fe XL, the Palisade has a few different driving modes. Sport mode makes things interesting by tightening up the steering with additional weight (maybe too drastically) while also improving the responsiveness of the throttle at tip-in. Snow mode, on the other hand, limits dramatics, dulling throttle response, transferring torque to the tires that need it most, and relaxing steering weight in pursuit of grip. With an ambient temperature of 65 degrees Fahrenheit during our time with the Palisade, we quickly discovered that Snow mode acts as a makeshift dirt mode instead. A moderate gravel course with the occasional bump confirmed Snow mode’s grippy abilities.

Jutting up from the dash, the optional 10.3-inch touchscreen looks stunning (SE and SEL models get an 8.0-inch screen standard). The graphics of the infotainment system are crisp and clean, and Apple CarPlay and Android Auto come standard throughout the range, as does Hyundai BlueLink in the Limited model. BlueLink adds features like remote start, remote lock and unlock, Apple Watch. Google Watch, and Amazon Alexa connectivity.

But the home screen of the infotainment system is neither easy to navigate – due to its complicated layout – nor simple to access, because there's no tactile home button on the dash. The home screen is customizable, at least, making for quick accessibility to preferred features. But plugging your phone in to use Apple CarPlay or Android Auto is a much simpler solution. And using the standard steering wheel controls with the optional 12.3-inch digital instrument cluster (standard on the top-range Limited trim) alleviates some of that frustration.

Switch the left or right turn signal on, and a mirror-mounted camera displays a view of the Palisade’s blind spot into the appropriate side of the digital instrument cluster. It makes changing lanes simpler and safer. And though it's similar to Honda's LaneWatch system, Hyundai's setup stands out due to its front-and-center positioning of the video feed (Honda’s is in the center console), and crystal clear video resolution.

But the Limited trim is loaded with more active safety kit, including “Highway Drive Assist,” essentially a fancy term for radar cruise control paired with a lane centering system. Think, a dulled version of Nissan ProPilot. It works wonderfully, for the most part, without ping-ponging from one side of the lane to the other.

The Hyundai Palisade starts at a reasonable $31,550, which represents a barely noticeable $140 discount over the Kia Telluride. What you get at that price is the front-drive SE model. Outside of good standard safety tech, and with a steep discount over alternatives like the Ford Explorer ($36,675), the SE model makes a feeble case to take it home. We suggest moving up to the SEL model, at a minimum.

We suggest moving up to the SEL model, at a minimum.

At $35,200, the Palisade SEL comes with more standard features like second-row captain's chairs, a proximity key, and remote engine start, as well as options you can't get on the SE like eight-way heated and ventilated front seats, leather, and a power-folding third row. If you can swallow the fully loaded Limited's $46,400 starting price, it's the best of the bunch. Things like LED headlights and taillights, a premium front grille, eight-way power adjustable driver's seat, and premium Nappa Leather all come standard.

For all that's mentioned, the Hyundai Palisade is a big step up from the Santa Fe XL it replaces, and a serious competitor in a crowded class. Love it or hate it, the Palisade looks unique. And with a long list of standard features, including advanced tech, better safety, impressive dynamics, and most notably, near-luxury comfort, Hyundai’s new three-row could be the break-out hit the brand’s looking for.