2020 Jaguar XE Review: And Now For Something Completely Different

Not the best luxury sedan, but a good, off-beat alternative to German rivals.

Jaguar has a proud history of full- and mid-size sedans dating back decades. From the S-Type and XJ to, um, the S-Type and XJ, the Coventry-based automaker knows all about bigger four-doors. Its fortunes with smaller sedans have been less successful.

The XE, though, is an argument for judging a car's success on something other than sales. It's not the faultlessly competent vehicle you'd find from across the Channel, but as an eclectic alternative to the segment leaders, the XE matches luxury and tech with an aristocratic charm that stands in stark contrast to German or Japanese offerings.

Jaguar knows exactly what it's doing when styling small sedans. The revised XE's clean, muscular sheet metal, slim headlights and taillights, and perfect rear-drive proportions are textbook Jaguar styling elements. This isn't just a pretty car, though. Optioned as ours is, with the R-Dynamic's body kit, Caldera Red paint, blacked-out styling elements, and 20-inch wheels (the XE's most attractive option), this sedan is striking.

That impactful design doesn't extend to the cabin, though, which is merely average. The styling here is clean and the materials premium, but the dash is a morass of boring, black leather and plastic and the only way to brighten up the cabin is via the seat upholstery and matching door panels. There's no excitement or drama, let alone an eye-catching element or splash of color – you get black leather on the dash, some contrast stitching, and a small bit of wood or, in our case carbon-fiber trim. Even the shapes of things like the center stack and vents are unexciting. This isn't a huge departure from last year's car, although at least that XE had a neat dial shifter that rose out of the dash on startup – the facelift added a more conventional, and less interesting, gear lever.

There's a real sense of occasion when walking up to the XE, but it fades once you slide behind the wheel and assess your surroundings. 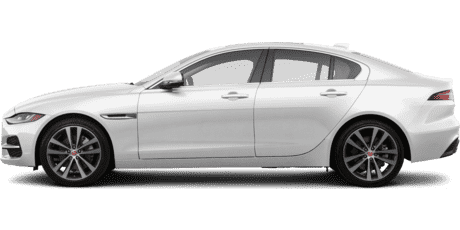 Dull as the cabin design may be, it's a generally quiet and comfortable place. There's little wind noise, even at highway speeds. Our tester's 20-inch wheels and low-profile 35-series Pirelli Sottozero winter tires aren't a recipe for a pleasant ride, but the XE's suspension tuning and sound deadening mitigate the impact of both well.

The cabin itself has comfortable front seats. There's ample support, but the chairs aren't restrictive. The only improvements Jaguar could make would be to offer more adjustability – your six-foot, one-inch author's head was almost brushing the headliner, while the low roofline limited forward visibility at stoplights. The second row is tight, although the XE's 35 inches of legroom is comparable to the BMW 3-Series and Mercedes-Benz C-Class. The rear bench, meanwhile, is comfortable and well padded, with the same high-quality leather found in the front row.

There's plenty of space for all of modern life's trappings, with a sizable tray and wireless phone charger ahead of the shifter. Behind that, a retractable cover for the cupholders makes it easy to hide all the things that accumulate there. The trunk is reasonable, with 14.5 cubic feet of space – more than the 12.6 cubes you'll find in a C-Class, but less than the 17 cubic feet that comes with the equivalent BMW.

The XE relies on the same tech suite in other modern Jaguar Land Rover products, with a standard 10.0-inch touchscreen on the center console. Our tester adds an additional display below that touchscreen for the climate controls, as well as a 12.3-inch digital instrument cluster.

As in other JLR products, like the Range Rover Evoque, the displays offer attractive graphics and a futuristic aesthetic, but the underlying software is slower to respond and more convoluted to use than we'd like. The lack of haptic feedback, particularly on the lower display, is frustrating too, as the slow response time makes it hard to recognize when the software has accepted an input. Offering physical controls for simple, common tasks like cycling through radio stations or activating the heated/ventilated seats would go a long way to improving our perception of JLR's tech setup.

This digital instrument cluster is growing on us, offering a degree of customization that should satisfy most customer tastes. The steering wheel controls for this screen, though, have a learning curve you won't find in rival setups. Changing layouts requires a few too many inputs, and certain gauge arrangements are less useful than others. Like the Evoque we tested a while back, our XE tester had an annoying lag to the rearview camera. This is a problem Jaguar needs to get sorted out immediately.

The Jag impresses with its available options. Aside from the aforementioned wireless charge pad, JLR's new rear-view camera mirror, a 360-degree camera, a sizable head-up display, and a heated windshield are all welcome additions to the XE.

The XE's refresh coincided with the death of a V6, available only on the S trim. In its place sits the most powerful version of Jaguar Land Rover's turbocharged 2.0-liter four-cylinder, packing 296 horsepower and 295 pound-feet of torque. That's down significantly on the old supercharged 3.0-liter V6, which offered up 380 hp and 332 lb-ft, although the 2.0-liter was unquestionably the more popular engine, even when the supercharged V6 was available. We aren't heartbroken about the bigger, thirstier engine's loss.

That's mainly because the XE remains a quick thing with the four-cylinder, benefitting from its standard all-wheel-drive system. Jaguar cites a 5.4-second sprint to 60, down six-tenths on the V6, although the 2.0-liter's broader, more accessible torque curve – peak twist is available between 1,500 and 4,500 rpm – make it feel more urgent than the 3.0-liter in everyday driving. The four-cylinder requires less pedal input and downshifting to build speed while underway, making for a more refined driving experience.

The 2.0-liter is strong enough, although the V6’s singing voice is impossible for the four-cylinder to replace. Like the Evoque we tested, this engine sounds harsh when pushed, while the overall volume level under hard acceleration is too high. We're okay with a lot of engine noise, so long as what we hear pleases the ears. It doesn’t here.

As with last year's model, the XE's only available transmission is a ZF-sourced eight-speed automatic, widely regarded as the best torque-converter auto on the planet. Whether it's down to lag from the 2.0-liter's turbocharger or a programming snafu on Jaguar's part, though, this gearbox is less enjoyable in manual mode than we'd expect. Upshifts are just a hair too slow. That said, in full auto the gearbox is as good in the Jag as it is in any other product on the market.

The XE is nimble and entertaining in corners, with direct, well-weighted steering. There's too little feedback through either the wheel or the chassis, but that's the norm in this class nowadays. The double-wishbone front and integral-link rear suspension on our tester features optional adaptive dampers that contribute to the XE's solid ride/handling balance.

But these dampers, along with the Configurable Dynamics system, are optional. Plan on spending $700 for the dampers and $350 for the privilege of tweaking the throttle response, transmission behavior, steering weight, and damper firmness. Both options are also available in a $1,315 package that adds a rear spoiler. For a car with the designation R-Dynamic S, it feels odd that such performance-oriented equipment is an option.

If there's one big benefit to ditching the V6 as the XE's range-topping engine, it's the increase in fuel economy. Expect an EPA-estimated 24 miles per gallon city, 34 highway, and 28 combined for our all-wheel-drive-equipped XE R-Dynamic S. Those are decent figures, although the XE, like nearly all of its rivals, loses a point for requiring 93-octane fuel.

Despite its relatively low score, the XE acquits itself well against the competition. It's more efficient than the all-wheel-drive versions of the Alfa Romeo Giulia (23/31/26), Audi A4 (24/32/27), Mercedes-Benz C300 (23/33/26), and Volvo S60 (21/32/25), while offering more power. Only the BMW 330i can stand up to the Jag at the pump, besting its city rating by a point and tying it elsewhere. Unsurprisingly, the four-cylinder XE S wallops not only its predecessor, but any other six-cylinder rival in terms of efficiency.

In terms of rivals, the XE R-Dynamic S sits between hardcore rivals like the Mercedes-AMG C43 and BMW M340i and the humdrum C300 or 330i. The most obvious competitors, though, match up neatly with the Jag's starting price. Plan on spending $46,400 on an Alfa Romeo Giulia Ti Sport AWD or $47,950 on the BMW 330i M Sport. Less enthusiastic alternatives are available for less, of course. An Audi A4 Quattro starts at $40,900, while a Mercedes C300 4Matic goes for $43,400. If you don't need the R-Dynamic's sportiness, there are better values, but if the aggressive styling and uprated performance are important, the XE's price is in line with the competition.