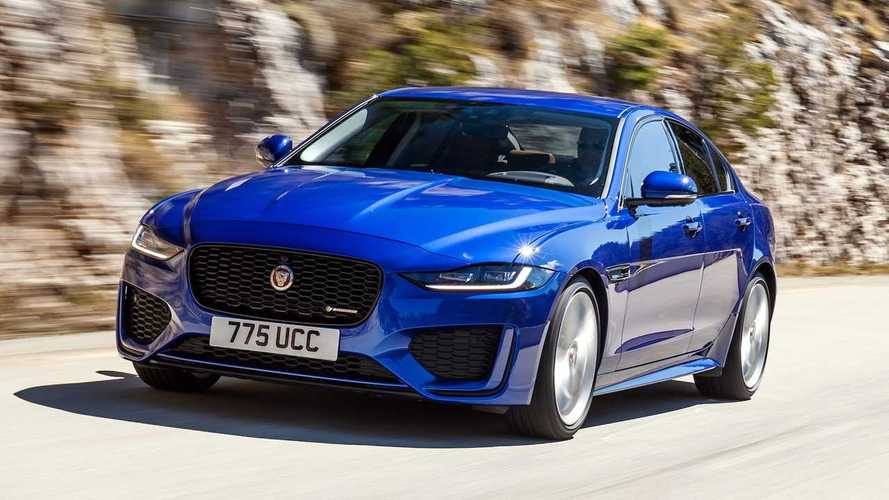 With more tech and more style, the 2020 Jaguar XE is better all around.

For the 2020 model year, the Jaguar XE gets a refresh, not a full redesign. Not that we expected anything more dramatic than that. But as an appealing outlier attempting to combat mainstream leaders like the BMW 3 Series and Audi A4, the minor makeover is all the XE needs. Its newly elevated style and added tech enhance the XE all around, making it a truly modern, marketable luxury sedan for Jag.

Squint hard enough and you might be able to make out the changes on the XE's new face. The now-standard LED headlights are slimmer and sleeker, with animated blinkers. New front vents and a redesigned bumper emphasize the XE's width, though it's not actually any wider. The same goes for the rear. The redesigned rear bumper extends the XE's ass out visually, and the sleek LED taillights sharpen up the styling overall.

Through all its subtleties, the XE is stunning – more so than the previous model by a large margin. It's neither too busy like the Lexus IS nor overly expressive like the Alfa Romeo Giulia. Even the base XE is beautiful. Where more dramatically styled competitors look awkward with smaller wheels and less kit, the 2020 XE (even with standard 18-inch wheels) wears its improved lines well in all trims.

Every crease on the 2020 model shares the same purpose: to send air seamlessly from front to back. In this case, the updated styling up front, smoother profile, and revised rear valance improve the drag coefficient in the top trim level from a very good 0.26 to an exceptional 0.25.

Under the hood, however, Jaguar has actually reduced the XE's engine options. Gone is the supercharged V6, and the diesel retreats to Europe exclusively for 2020. But that helps streamline the U.S. model to just two trims with two engines: a P250 model producing 246 horsepower (with rear- and all-wheel drive), and a P300 model pumping out 296 horses (with all-wheel drive only). Both with a turbocharged 2.0-liter inline-four engine.

Through all its subtleties, the XE is stunning – more so than the previous model by a large margin.

Even the less powerful P250's turbo four is supremely good. A punchy, linear throttle response combined with lots of low-end torque gives the entry-level XE life at low RPMs. In Eco mode, where throttle response slows for efficiency, the XE is a bit tentative. But pop it into Dynamic and the XE unfurls all 246 horsepower and 269 pound-feet of torque abruptly as the eight-speed automatic shifts quickly between gears. Pull on the chunky metal paddle shifters behind the steering wheel and the return is even more pleasing.

The XE is an athlete in the corners, too. The turbocharged 2.0-liter and eight-speed automatic are teamed with a competent suspension setup and smooth, direct steering. Toss the XE into a turn with speed, and you'll find power and composure on the other side of it. But we almost miss the dramatics of other Jags. The steering is sharp but too neutral, and while the chassis shrugs off chicanes, it does so indifferently, with no real feedback to the driver. The personality found on products like the F-Type and F-Pace doesn't carry over here, unfortunately. (Note: we didn't spend any time in the P300 model).

What does carry over from the I-Pace (and some Range Rovers) is Jaguar’s optional 12.3-inch digital instrument cluster, and what the brand calls its "InControl Touch Pro Duo" infotainment display. Up top, there's a 10.0-inch touchscreen that mimics a modern smartphone in both responsiveness and quality of graphics. This is where you'll find things like the navigation system and stereo. Meanwhile, the lower 5.5-inch screen adjusts things like climate and seating controls, with two dials on either side to alter fan speed and temperature.

Jaguar's dual-screen setup isn't the best we've tested, but it's superior to most alternatives in the segment. It appeals to a younger demographic with its looks, ease of use (aside from a bit of digging for some functions), and Apple CarPlay and Android Auto compatibility. It's super simplified all around – no more fiddling around with a central control knob or fussy touchpads. But if we had to knock it, the XE's new tech almost relies too heavily on screens. There are screens atop screens, particularly within the climate control dials. Even the rear-view mirror acts as a screen, with the option to display a feed from a rear-facing camera.. Because who doesn't love more screens?

Further improving the cabin, Jaguar ditched its well-known rotary shifter in place of a traditional "SportShift" lever, for which we are thankful, and finished the dash, center console, and door panels in standard upgraded leather with improved stitching. The brand new seats are wonderfully upscale (though, a bit stiff), coated in high-quality leather, and are standard throughout the range. There's even a standard wireless charger for your smartphone behind the shifter. Overall, the XE's insides finally match its more modern, increasingly upscale classmates.

Safety features like front and rear park assist and lane keep assist are also now standard on the 2020 Jaguar XE, and there's an optional Park Assist feature that steers the car into open spaces. But that's about it. The Jaguar XE doesn't offer adaptive cruise control or lane-centering, which is surprising considering the tech is available on most cars in this class.

Jaguar's dual-screen setup isn't the best we've tested, but it's superior to most alternatives in the segment.

What you get with the 2020 Jaguar XE is more of everything – well, except cylinders. Added tech and improved styling make the XE, finally, a serious option in this hyper-competitive class. Safety lacks, and some of the lovable personality of other Jag products takes a back seat, but the XE is now a much-improved option all around.