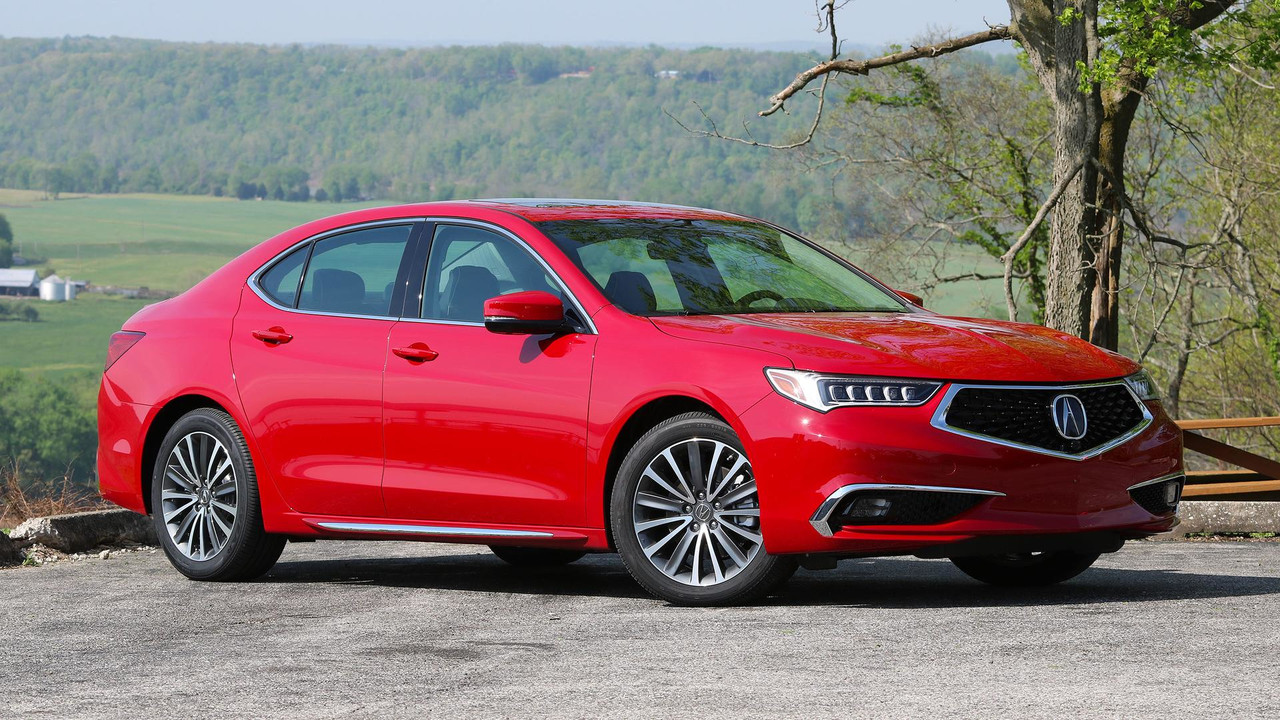 Ever since Acura merged the TSX and TL into one vehicle, the result – the TLX – has had a challenging mission. It has to fill the void left by both the sporty TSX and the luxurious TL, a Venn diagram of attributes that the TLX has so far managed to meld. But it hasn’t necessarily excelled at either sportiness or luxuriousness. Newly refreshed for 2018, does the TLX manage to straddle that line better than before?

Certainly from the way it looks, the answer is yes. Everything ahead of the A-pillar is new, meaning the hood, standard LED lights, and front fascia all have been updated. The controversial (read: ugly) grille is gone in favor of what Acura calls a “diamond pentagon” shape inspired by the Acura Precision Concept and also seen on the MDX. The TLX was already a smart design, but now it appears far more purposeful and, yes, less dorky from head-on.

Moving up the trim levels results in different styling cues. “We wanted to create a lot of differentiation in our models,” explains Jonathon Rivers, Acura TLX lead product planner. So models with the 3.5-liter V6 engine instead of the base four-cylinder have two different 18-inch wheel options, more chrome, LED fog lights, and exposed exhaust tips.

The biggest nod to enthusiasts who lament the death of the TSX is the new A-Spec trim. Building on the existing V6 Technology trim level, it is definitely the best-looking TLX variant, with darkened chrome trim, gray 19-inch wheels, new fascias and side skirts, and a trunklid spoiler. There are also four-inch exhaust tips, but sadly they’re just finishers and contribute nothing to any extra aural excitement; look inside and you can see the small, standard exhausts hiding away. Still, all the changes together look great on the road. Inside, too, the TLX A-Spec has tweaks like a unique, thicker steering wheel; Alcantara trim on the seats and door panels; metal pedal covers; and so on.

It’s more than just a wheels-and-trim pack, though, with actual mechanical changes meant to improve handling. Compared to a regular TLX, the A-Spec’s anti-roll bars are larger, the spring and damping rates are stiffer, the steering ratio is quicker, and the tires are wider (245/40R19s instead of 225/55R17 or 225/50R18). The engine is also louder, but only by virtue of modified artificial sound enhancement; Acura says there’s a four-decibel boost above 4,000 rpm compared to a non-A-Spec car.

A-Spec is more than just a wheels-and-trim pack, with actual mechanical changes meant to improve handling.

Those tweaks come together well as I wring the TLX A-Spec out on winding country roads in southern Indiana. The new steering wheel, specifically, is lovely to use, and the cabin’s various Alcantara appointments both look and feel great. yes, The car also is, yes, fun to drive.

Acura’s 3.5-liter V6 remains a star, and although it takes some time to deliver its peak 290 horsepower (at 6,200 rpm), it builds power smoothly, predictably, and with zero unpleasant noises or vibrations. With power routed through a responsive nine-speed automatic, the A-Spec is quick. Not lightning fast, but plenty quick. It’s also refreshing to drive a naturally aspirated car with such smooth take-off behavior in the city; many turbocharged competitors aren’t quite so slick off the line.

My test car is fitted with Acura’s Super Handling All-Wheel Drive (SH-AWD), which uses a clever rear differential to vector torque from side to side through bends. The effect is subtle but noticeable, tightening the car’s line when you apply power mid-corner. A small display in the trip computer highlights exactly where torque is being apportioned while you’re driving, but it’s basically impossible to safely check it out while in motion.

What’s far more noticeable is the firmness, precision, and grip from the A-Spec’s chassis upgrades. It drives with verve and vigor, yet the upgraded suspension and wheels don’t particularly affect ride quality. Yes, it sounds racier, too, though I wish that noise were coming from the exhaust tips rather than being pumped in through the stereo.

The A-Spec drives with verve and vigor, yet the upgraded suspension and wheels don’t particularly affect ride quality.

Switching back to a standard TLX – specifically, a V6 SH-AWD with the top-tier Advance trim level – isn’t really a disappointment in the driving dynamics field. Its powertrain is just as smooth, its steering still unerringly precise, its handling still reasonably controlled through fast corners. In traffic, the car easily squeezes through gaps and there’s great visibility all around. The cabin is calm, with only modest amounts of noise or road bumps making their way to occupants.

Aside from the new infotainment system (more on that later) and the various A-Spec tweaks, the inside of the TLX is pretty much the same as before. Controls are all exactly where you expect them to be, the big dial-binnacle instrument cluster is hugely legible at a glance, and the seats are plenty comfortable. Back-seat space remains adequate for fitting full-size adults, and the trunk, at 14.3 cubic feet before you fold the seats, is respectable for this class of car.

On all versions of the TLX, Acura put lots of effort into revising the software and hardware in its AcuraLink infotainment system. “Knowing that we attract a lot of young, Millennial customers, we want to make sure we have great technology,” says Rivers.

It’s still a split-screen design, with a lower touchscreen and an under display manipulated by a “jog dial” on the center stack. The lower display uses a totally new menu structure, with fresher graphics and a “flat” design that’s far more responsive than the old low-res infotainment system. It takes fewer button pushes to find key controls, and there’s a lot less waiting than before – Acura says the system is 30 percent faster. The navigation map display, however, still looks as crude as an early Sim City game.

On the plus side, Acura has finally found a killer app for its dual-screen layout, which is presenting the Apple CarPlay and Android Auto interfaces on the upper screen. Activated by a giant “Smartphone” button on the center stack, it means you can still operate the car’s built-in radio functions on the lower touchscreen while having your phone’s map interface shown up top. The downside is you must use the jog dial to use CarPlay/Android Auto, which is more cumbersome than rival cars’ touchscreens, though voice commands are also possible.

The TLX still feels like an outlier choice and is neither the sportiest nor the most luxurious car you can find, yet it is a very good car.

Other new technologies for the 2018 TLX include wireless phone charging, a 360-degree camera system, plus catch-up luxury amenities like a heated steering wheel, heated rear seats, ambient light piping, and power-folding mirrors. AcuraWatch, which encompasses forward-collision warning, lane-keep assist, and adaptive cruise control, is standard on all trims, though blind-spot warnings are an option.

Acura will continue to offer the TLX with a 2.4-liter inline-four engine, too. It comes only with front-wheel drive, but has rear-wheel steering to help improve handling. The engine still mates to an eight-speed dual-clutch transmission and produces 206 hp and 182 lb-ft. Representatives says about 60 percent of current TLX sales are for the V6 model, perhaps explaining why there wasn’t an opportunity to drive the 2.4 at the car’s launch event.

In all its forms – at least with the V6 engine – the 2018 Acura TLX acquits itself wonderfully as an entry-luxury car. The A-Spec model stands out for its sharper design and more involving driving dynamics, and looks to be the most alluring model if you want a sports sedan but can’t stretch to the price of the Germans. The TLX still feels like an outlier choice and is neither the sportiest nor the most luxurious car you can find, yet it is a very good car. Its all-round pleasantness and value-for-money proposition still make it worthy of your consideration.