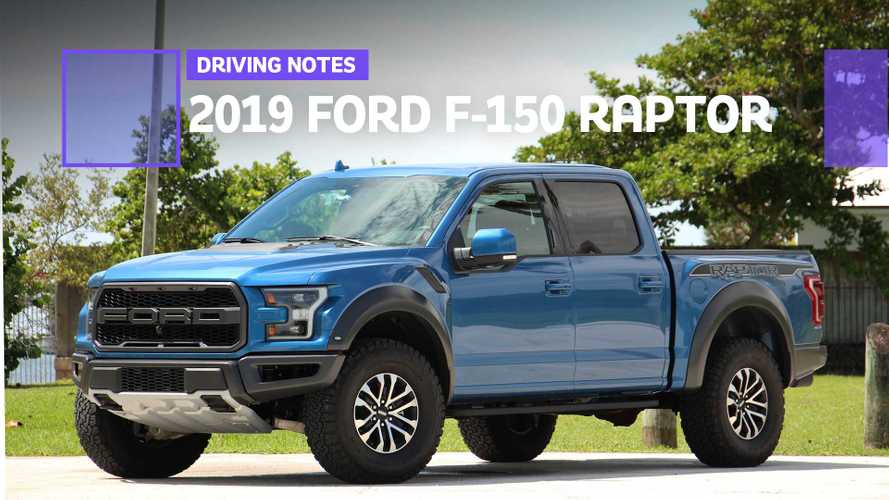 The Raptor lives up to its name.

Naming Ford F-150 Raptor after a flesh-eating, prehistoric creature and/or a carnivorous bird sets lofty expectations that, frankly, few other vehicles can achieve (ask the Campagna T-Rex). But the F-150 Raptor exceeds those expectations; it's a truck that's every bit as capable as the name suggests.

With a twin-turbocharged V6 under hood, the Raptor has sports car-like sprinting abilities. But thanks to an advanced off-road kit, this truck is capable of conquering Baja out of the box, too. And while, yes, it is a bit daunting to drive in the city due to its size, and things like fuel economy and fit and finish could be better, it's hard to argue against the Ford F-150 Raptor’s status as the most badass truck on sale today.

The F-150 Raptor is one of my favorite vehicles on sale today because it’s unique in purpose and a blast to drive in a way that no other vehicle is. This is a high-performance off-road vehicle, the likes of which no other manufacturer offers. There are faster street trucks and more capable rock crawlers out there, but there’s never been an off-road vehicle from a mainstream manufacturer capable of attacking the turf at such high speeds. And the Raptor continues to be the only one available despite being on sale for nearly a decade.

This lack of competition could’ve bred complacency, but thankfully, that’s not the case. The Raptor has only gotten better since its introduction in 2010, and today comes with more power, technology, and ability than ever before.

Mash the throttle, and it accelerates like a rodeo bull out the gate – your only job is to grip tight and brace yourself. This is not a vehicle that corners like it’s on rails; the Raptor corners like a stadium truck, leaning, pitching, and diving its way around a topsoil circuit.

All that movement is necessary, though, because the suspension requires enough travel and damping to handle anything in its way. That includes any pitched surface with enough height to take the Raptor airborne. That’s right, Ford sells this truck from the factory with the ability to fly, and that tall, soft suspension is engineered for soft landings.

That capability translates to the highest level of freedom imaginable. While any car imparts the freedom to travel, the Raptor imparts a broader freedom to travel anywhere. The invisible walls that keep all of us driving inside the lines don’t exist for Raptor drivers, because they could cock the steering wheel 10 degrees and keep driving through, over, and above anything in their path. Suburbia becomes an open sandbox behind the wheel of a Raptor.

The downside? Terrible fuel economy. The Environmental Protection Agency (EPA) rates the Raptor’s twin-turbo V6 at 15 miles per gallon in the city, 18 on the highway, and 16 combined, which is among the worst fuel economy ratings of any vehicle we’ve tested this year. If only there were a way to address this solitary shortcoming. With Ford’s recent investment in electric start-up Rivian, there just might be.

Drive the F-150 Raptor for five minutes and you understand why this thing is so damn beloved. Even without the outgoing Raptor's V8, the twin-turbocharged 3.5-liter Ecoboost V6 engine provides more than enough oomph to launch the 5,500-pound truck off the line with some ferocity. There's a hearty 450 horsepower and 510 pound-feet of torque routed through a 10-speed automatic.

But it's off the road where the Raptor really shows its strengths. Granted, Miami isn't the most geographically gifted city in the world, but having driven the Raptor on the rock and dirt in Utah, I can attest to its impressive off-road capabilities firsthand. Adaptive Fox shocks, now standard throughout the range, Trail Control (which is essentially cruise control for off-roading), and chunky off-road tires make the Raptor one of the most capable off-roaders on the planet.

But nobody (or in this case, no vehicle) is perfect. And for as absurdly fun as the Raptor is to drive, its cheap, plastic-y interior leaves a lot to be desired. The entire infotainment surround, center console pieces, and door panel trim are low-quality plastic. The gear shift lever, though crafted from carbon fiber (part of the $995 Carbon Fiber package), feels flimsy. This is a $73,155 truck (as tested) and while the F-150’s more luxurious variants feel worth that price tag, the Raptor should, too. It doesn't.

It’s hard not to fall for the Ford F-150 Raptor. If you say you’re not completely mesmerized by Ford’s enormous off-roader, you are either a cold-hearted person or a liar. When you have the power to give life to this 450-horsepower monster in your pocket, your heart races and melts at the same time. Once in the driver’s seat, after waking up its brutal twin-turbo 3.5-liter EcoBoost V6, you are a true king of the road, looking down at everybody else with all those 510 pound-feet of torque ready to smoke anything and anyone nearby at your command.

Ford loaned us a Velocity Blue 2019 Raptor SuperCrew that looked gorgeous and intimidating, a combination I hadn’t experienced since Tigger, my beloved 90-pound pitbull passed away six years ago. My week with the Raptor coincided with a visit by my elderly parents. Entering and exiting this monster truck wasn’t an easy task for them, but they sure loved riding in it. They were also completely perplexed by the Raptor, not understanding why anyone would ever need something this big and powerful. And I’m not sure I was able to explain it to them, at least not from a rational point of view. The truth is that no one needs a Raptor. This is a purely emotional vehicle, and in that sense it’s nearly perfect.

But it isn’t totally perfect. For starters, the Raptor’s cabin is way too plastic-y. This was fine – and pretty much the norm – for full-size pickup trucks in the mid-2000s. But in late 2018 the Ram pickup changed the game, and its high quality and gorgeous cabin makes everything else in the segment look cheap by comparison. But the Raptor’s real problem is its size. It is, after all, an F-150 on steroids. And when you add height and width to an already humongous vehicle, it only makes it more difficult to maneuver this beast.. This is not a truck for everyone. Could I live with it? Sure. Would I want to? Eh... Maybe Ford should reconsider bringing that stunning international Raptor Ranger to our corner of the world, after all.

The Raptor is firmly cemented in the hearts and minds of truck enthusiasts everywhere. Save for the Jeep Wrangler, the loveable Raptor is more or less accepted as the standard for American-made off-road prowess. Much of Raptor’s success is due to its immense abilities out-of-the-box. Ultra-capable Fox shocks, massive tires, and a widened body means this truck’s footprint is absolutely massive. Driving it feels like you’re piloting a tiny house,, towering over most everything around you. Hit potholes. Hit curbs. It just doesn’t matter in the Raptor.

In addition to sheer durability, the Raptor’s EcoBoost V6 is a hoot to play with. Though it lacks the fun noises of the prior 6.2-liter V8, the new engine’s 510 lb-ft of torque fill the void – at least for me. It’s my favorite vehicle in Ford’s lineup and the best off-road vehicle on sale today.

The flip side of being the biggest thing on the road is, well, you’re the biggest thing on the road. In more rural parts of the country, the Raptor makes perfect sense. But in the tight-laned Miami streets, it’s a constant headache. Parking lots also proved challenging due to their narrow spots and comically small turnouts. A Raptor belongs in the wild, not in the confines of a shopping mall. And though I can’t blame the truck for its daunting size, it does alienate city-folk from buying one. If only there was something smaller and still off-road capable. Say it with me: “Ranger Raptor, Ranger Raptor!”